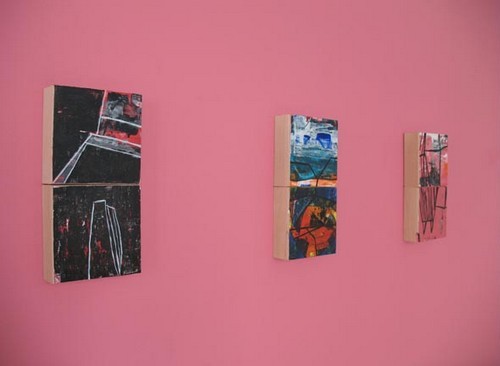 This second show of Amy Granat at BROADWAY 1602, a two person exhibition with Chuck Nanney, takes now place in the new space of the gallery. Granat had before reacted in a unique way to the atmosphere of the old gallery space in Winter 2008, by allowing the changes of light during the winter days to create different aesthetic moods and situations in her installation of experimental film and photograms.

The new space is defined by the proximity to the liveliness of the streets in the Garment District and to the emblematic urban archetype of the Empire State Building. Again Amy Granat reacts to the space in an abstract form of poetic sensibility. The pristine silver-whiteness of the Empire State Building on which constantly changing colors are reflected, and the echoes of the street corner on Broadway, - these are impressions which gave the artists the idea that one “needs the orange to see the blue”, a blue which she imagines reflected outside and the orange appearing in her new film installation accentuating the surrounding gallery space: On three 16 mm projectors we see an almost intractable loop of monochrome orange scratch films.

In resonance with this film installation we see a group of photograms carrying the experiment further into a mute collaged dimension of conceptual language of object related or abstract forms.

A third layer of the over-all conceptual installation is created through the collaboration of Amy Granat with her friend, the painter and sound artist Chuck Nanney.

Beyond the aesthetic affinities between Granat’s scratch films and Nanney’s abstract paintings, there is a personal history which links the artists together: “When I first arrived in New York I spent most of my time with Steven (Parrino) and Chuck in their studio - with Olivier Mosset passing through on his way to and from Europe. This was my beginning as an artist, my 'education', and I see this history as being really important to the way I work. I am so very happy and grateful to be able to have our works exist together, in this two person show.”

Chuck Nanney’s new works are intensely compressed abstractions painted on small square blocks. Their allusive titles such as "the senses of the dead which are banging about inside my tired red eyes", "my extravagant collar", "abruptum" and "while we were waiting to become part of our century", are mostly “culled from poems by Frank O'Hara, fom his amazing book Lunch Poems”.

The mood and forms of these paintings relate to Amy Granat’s works in a peculiar and beautiful way: there is a poetic abstract quality in both bodies of works: - organic, opaque and psychedelic on Nanney’s part; - monochrome, graphic, airy and chance based on Granat’s part.

Both artists share an intrinsic relation to sound art and they recently collaborated on audio work for a coming show at Les Filles du Calvaire in Bruxelles.

“These paintings are discrete bits of sight/sound, information/noise. I usually start with audio I make, using Ableton Live and various instruments, mostly electronic. I build long repetitive soundscapes looping and processing recordings I have made. Engaging in this activity involves my synesthesia and I react in color and texture, which finds form in painting. Once the painting is initiated I continue the engagement on different terms that are wholly visual, directly related to the surface. Through a subtractive/additive process, layers build up and I create a dialog with the painting and the course of this dialog determines the resolution of the painting. The finished painting communicates specifically in a visual language which sounds like noise to me, sometimes it's a low hum, sometimes it's just resonance that echoes. And the loop repeats itself.”
www.broadway1602.com