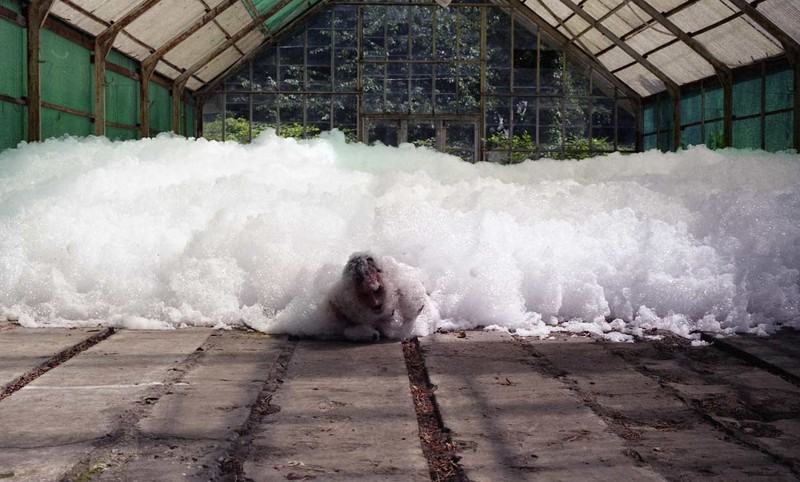 We are pleased to announce our second solo show with Warsaw based artist Anna Molska. In her new double-channel video installation Glasshouses Molska combines two of her recent films: the semi-documentary Mourners and Hecatomb, a surreal mise-en-scène originally shot on 16mm. Both films take place in green houses, one now used as a gallery, a pristine white space, the other a rundown vacant work place. The narrative sphere developed during the social experiment of the Mourners set into motion by the artist, provided the base for the visionary performance of Hecatomb. However phantasmatic this second film’s scenery might appear, its style is as concrete and down to earth as the Mourners. Both films operate with in a restricted minimal setting and use a limited range of precisely chosen down played props. These subtly directed sceneries provocate peculiar afterimages, an atmospheric color scheme appears: the pale brown winter coats of the Mourners make for an opaque and compact sculptural presence and the dirty corrugated green roof sheets of the glass house in Hecatomb fill the abandoned space with an animated light-temperature, - a remote stage for an unpredictable act.

“I set up a ‘research station’ near the city of Radom, in the village of Oronsko, famous for its sculpture center – a Mecca for sculptors in Poland. There I met a small community – seven women friends from a folk singing ensemble called Jarzebina (‘rowan’).
My intention was to change their natural environment, to clear it of aspects and people they were familiar with: family, friends, duties, everyday chores and folk costumes were removed. They were provided with a set of rather neutral ‘working clothes’ – grey-brown winter coats –, and the cozy spaces of their homes were replaced by a greenhouse, which currently serves as a gallery. The ‘Mourner’ is an ancient profession. When summoned they wail professionally in the funeral room or by the deceased person’s coffin.

The most interesting motifs of their conversation were digressions about death and the evil. Death, according to the Mourners sometimes has feelings and is capable of taking pity on the individual. Evil is an embodiment of the devil and a very traditional one at that, complete with ‘horns, tail, hooves and a red rump’. You could always make some sort of a deal with the devil, win or lose. Sometimes the devil would assume as a human or animal form, such as that of a dog. It is Satan who persuades people to sin and is responsible for all their misfortunes. Unlike death, the devil has his humorous aspects. Death was something the Mourners never joked about.

A year later - inspired by a so-defined motif of death and evil - I decided to create a new work called Hecatomb. In Ancient Greece, a hecatomb (Greek hecaton = 100) was a sacrifice of one hundred cattle. The term has also come to denote a sacrifice in general and is connected with a sense of loss. The film’s structure is based on cyclicality, the film starting and ending with an almost identical scene of entering the same space anew. It is an attempt to show what I fear the most, as well as - in a general sense - my vision of the fears of the Mourners. I decided to show ‘my evil’ not by using the phantasm of the devil or an image of death as a Grim Reaper, but by creating the atmosphere of, or describing in filmic terms the notion of ‘acedia’.