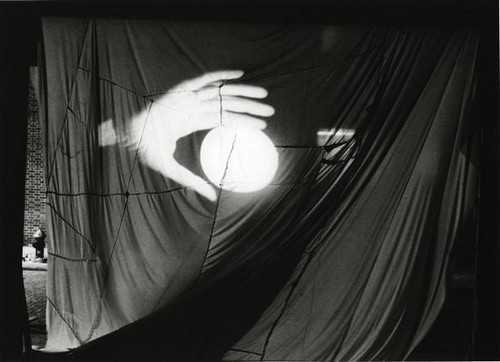 After her first retrospective show in the US Spaces to see, Stories to tell in summer 2007, New York based film avant-garde pioneer Babette Mangolte is presenting her second solo show at BROADWAY 1602 with a new film installation.

and an installation of prints (TOUCHING) arranged freely and offered for interaction.

The artist has recently premiered her film installation PRESENCE at the Berlin Biennial 5. In these new pieces fuses rarely or never seen footage and imagery from her past practice of the 1970s and beyond with newly developed material in a conceptual editing, informed by her early minimal film work.

Babette Mangolte was born and raised in France. As a cinematographer, director and photographer, she has been present in the contemporary art, film, dance, theatre and performance scene since the 1970s. In the course of her move to New York City Mangolte started directing films based on experimental narrative in her first features What Maisie Knew (1975), The Camera: Je, La Camera: I (1977) and in the two short films (NOW) and Richard Serra Film Portrait (1976). In the following decades she continued with conceptual documentaries in e.g. Sky in Location (1982) and Les Modèles de Pickpocket (2003).
From the beginning of her practice on Babette Mangolte did groundbreaking camera work e.g. in her collaborations with film director Chantal Akerman and performance artist Yvonne Rainer. In 1978 she directed the legendary dance performance film Watermotor (1978) shooting the solo of New York dancer Trisha Brown with a special dramatization of filmic time.
In her photographic work of the 1970s Mangolte focused on an intellectually and artistically invested style of performance documentation, interacting through her still camera with such characteristic and varying artists as Richard Foreman and Robert Whitman coming from experimental theater and (minimal) performance protagonists Yvonne Rainer, Robert Morris, Trisha Brown, Lucinda Childs and many others. The collaborative spirit of the time is further reflected in the incident that Yvonne Rainer, Philip Glass and other personalities of the Soho scene of these days appeared as actors in Mangolte’s own debut What Maisie Knew, portraying scenes of “conceptual intimacy”.
Mangolte’s work has widely been contextualized within the framework of institutional exhibitions presenting New York’s dance, performance, and theatre scene and it is precisely her “anthological” photographs that enabled generations to familiarize themselves with the work of the mentioned artists. Her film work has been presented in numerous international film festivals and in museum’s film programs, e.g. at the Whitney Museum of American Art and Anthology Film Archives. Her films are in the collections of The Museum of Modern Art, Centre Pompidou and Fondazione Sandretto Re Rebaudengo. Mangolte recently published the feature “Life in Film: Babette Mangolte” in Frieze magazine on the meaning of influence in her practice.
BROADWAY 1602 represents Mangolte’s work and archive since 2006.
www.broadway1602.com