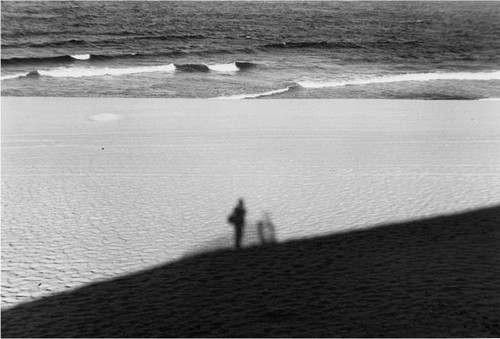 Film and photo installation, 2008
US premiere of Mangolte's installation created for Berlin Biennial 5

BROADWAY 1602 presents the third solo project of New York based film-maker and photographer Babette Mangolte. The artist in known for her experimental film work originated in the 1970s and for her collaborative documentary work with the Soho performance and minimal dance scene of the time.

The artist recently showed the installation “How to Look” (1978) at the Whitney Biennial 2010 which received wide interest in regard to its genuine concepts addressing the viewing subject. The installation was dedicated to Mangolte’s “models”, artists she intensely worked with, among them Trisha Brown, Yvonne Rainer and Lucinda Childs who were working towards a new interpretation of dance as a de-dramatized conceptualization of movement in space.

This new show in our gallery has two phases and spatial situations. Gallery I presents the US premiere of Babette Mangolte’s film installation “Presence” which was shown at the Berlin Biennale 5 in 2008. For the Gallery II the artist worked on a conceptual tableaux about “Movement and Stills” based on her collaboration with the choreographers Lucinda Childs, Trisha Brown, Simone Forti, Steve Paxton and David Gordon.

PRESENCE, a two channel film installation made for the Berlin Biennale 2008.
Space and orientation inside a film image as defined by sound or lack of sound was the impetus. Presence is about two kinds of space, the space of the gallery or museum and the spaces in which we live our lives.

Competing for attention, the two film projections test a new spectator, who has the freedom to choose one screen over the other unlike the spectator in a movie theater with its captive audience. The film material edited for Presence was shot during the 1990s. Reflecting on spaces has been central to my film work and I have examined domestic space, public space as well as institutional space. The content of the installation is both about living and working spaces and how sound defines a film image as space. I added texture of surface and the skin of cactus flowers and plants with images of terrain and land formations.
Space becomes what the spectator with his circulation in the gallery space experiences first hand.”

“This presentation shows various ways to evoke the specifics of the dance vocabulary explored by the choreographers I have followed with my still camera in the 1970s and 1980s. As a filmmaker I had learned to see movement with the motion studies by Edward Muybridge, which led to motion pictures. This return to a basic vocabulary was also one key factor in defining the dance work of the Judson generation.

Digging into my photo archives I have attempted to seize images that are exemplar of specific movement, provide a context for each dance, with its use of improvisation or set patterns. The analytical work of the editing of my archives is manifested by combining several images from one given dance on one print or by unfolding the analysis of multiple images of one dance in a slide show.

I am attempting - by grouping disparate photographs - to construct a mini portrait of the choreographers whose work is represented here.

Lucinda Childs: various prints from all different dances and a composite, the film Calico Mingling (1973)
David Gordon: Contact sheet of The Matter, dance from 1972, in which he used the positions from Edward Muybridge’s Human Locomotion series to shape the choreography, composite image and one print from his famous duet with two chairs.
Trisha Brown: the focus is on three dances Line-up (1975, 1976), Water Motor (1978) and Opal Loop (1980)
Simone Forti and Steve Paxton”