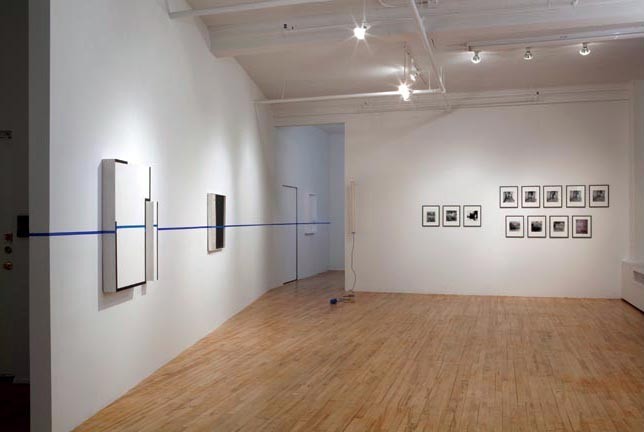 Art only consists in escaping situations. Good solutions only come about while trying to save oneself.

What I do is very mobile, meaning unfinished. This allows people to remain hopeful.
(Edward Krasinski)

Edward Krasinski (1925-2004) was one of the most artistically charismatic protagonists of the post-war Polish avant-garde. The frequently used notion of Conceptualism to define Krasinski’s work does not reach far enough to cover the formal, theoretical and experimental dimensions of his oeuvre, - and at this conclusion there is a surplus in Krasinski’s work which remains untouched by definition.

I wouldn't want to spoil what I do with God knows what "artism" (E. Krasinski)

Known for his legendary choice of the ‘blue line’ - a 19 mm wide blue electrical Scotch tape applied horizontally at the height of 130 cm, – as an interventionist medium which would henceforth connect his sculptural work with the environment in any given space -,
Krasinski engaged with a neo-avantgarde from of art making which favored a restrictive conceptual language. Yet, Krasinski’s formalist innovations in the late 1960s (his first use of the blue Scotch tape dates to the year 1968) can be traced back to his beginnings as a surrealist painter and book illustrator. The illusionism inserted into the abstraction of Krasinski’s work carries it to a genuine almost magical place where one witnesses a certain even messy grotesque treatment of the object and the everyday a gesture comfortably imbedded in the frame of minimalist precision. Dan Graham recently called this effect in Krasinski’s work “a kind of humorous perversity”. But by paradox – to typical for Krasinski’s practice - this illusionism was achieved through a process of revealing what was already there, a process Krasinski repeatedly referred to as the “unmasking” potential of the blue line.

The blue line with its infinite horizontal extent constitutes an intervention into space and time. The blue line could connect everything in its way from aesthetic objects to mundane pre-existing things or even nature and people (the tape was first attached on trees and perceived by the artist as the contradiction between living and dead material).
In a next step Krasinski - again within the workings of the creative paradox - doubled and intensified this interventionist effect up to a self-mannerism by creating objects made of rectangular wood boxes titled “Interventions” which he would connect with the blue line. On the surfaces of these boxes a graphic play of spatially organized lines was set into motion. The effect is a temporary installation giving its space of operation a sense of rhythm, a generous yet precisely accentuated visual and aesthetic engagement with a given environment.

Perhaps it is that I only think about the spectator, about his body, about his eyes (organs of vision) and about the fact that he shan't be smothered by anything, while continuing to be in a human environment, in the continuity
of normal life. (E. Krasinski)

There existed an extraordinary proximity and axis between the presence of Krasinski’s aesthetic objects and his private sphere, which also reflected the political economy and tension of private and public in the Communist era. Every element in Krasinski’s work seems to be affected by this symbolic economy and the fact that he was situated in an artistic milieu, which constituted a resistance to the system through individualism and radical avant-gardism.

In 1970, after his former wife, collaborator and co-founder of Foksal Gallery, the critic Anka Ptaszkowska had immigrated to Paris, Krasinski was approached by Henryk Stazewski (1894-1988), the Polish Constructivist and legend of the pre-war generation, to share the latter’s studio in a post-war apartment block on Aleja Solidarnosci 64 in Warsaw.
The two men, representing two very profound artistic generations of Polish avant-garde, lived together in this apartment studio for 18 years until Stazewski’s death in 1988. The studio showed an absence of traces of work, but was for decades a salon and meeting point of the Polish intelligentsia and art scene. And since Stazewski’s physical absence Krasinski turned the space more and more into a self-referential stage of his and his friend’s living and artistic interiors. What seemed to be an informal domestic space became the very “basis of its own art production system” (Rachel Haidu).

The studio therefore plays a prominent role in this exhibition as the place where Krasinski and Eustachy Kossakowksi staged a number of object-related performances and where they staged Krasinski’s sculptures themselves inside the domestic environment. The works - looking sometimes even arbitrarily located, circumstantial and given away to the entropic dynamic of the everyday – were instead positioned with a sense of playful precision.

J’AI PERDU LA FIN!!! is based on a series of photographs taken by Krasinski’s friend and collaborator Eustachy Kossakowski (1925-2001). The image sequence of the same title presents Krasinski getting entangled in a pile of cable. The performance owes as much to a restrained conceptual sensibility as it is caught up in an act of existential grotesque and formalist comedy. The title and image was originally used for an exhibition brochure of Krasinski’s show at Foksal Gallery in 1969. The collaboration of Krasinski and Kossakowski began in 1964 at the occasion the Second Outdoor Show in Osieki where Krasinski enacted his work “The Spear”, an aerial horizontal string sculpture hanging seemingly effortless and without visible fixation in an autumnal landscape. This effect is visually conveyed to the presence through Kossakowski’s particular camera framing of the event where we see the “Spear’s” ephemeral materiality shot against the sky floating above a low horizon in the last picture of the sequence. The first image shows three protagonists in the landscape as blurry fleeting figures. They seem to escape from the anticipated event to let the elements take their own course. In the next frames we see Krasinski in the fields in a Jacques Tati style outfit of trench coat and hat as the master of a ceremony which could not be less assuring, but elegantly coming to terms with the instable, fragile, broken elements of the “Spear”. “He alone worked from the beginning with a consciousness of the wholeness of the air, from the ground to the sky (...) his sculpture was the absence of plastically perceptible mass. (...) Space itself was interrupted, intermittent (...)”
(Julian Przybos, - Poezja No1, 1966).

Partick Komorowski stated: “On the one hand, cooperation with Krasinski enabled the photographer – Kossakowski specialized in photo-reportage in the early 1960s – to enter
the realm of art. On the other hand, it enabled the sculptor Krasinski to introduce photography into the formal language he used.”
Henceforth the two friends collaborated on an extensive body of photographic work, which is for the first time in the US presented in this show with 93 photographs dating from 1964 to the year 1970 when Eustachy Kossakowksi immigrated to France. Apart from a few clearly documentary photos of the Polish scene and events in this period, most photos on show present the indistinguishable status of images being at once documents of staged actions and staged objects by Krasinski and being the very art work themselves, the art process at work or as Adam Szymczyk emphasized “documentation as artistic action”.

The use of the medium of photography was a logical further step in Krasinski’s entropic aesthetic introducing another means of distancing material fixation while opening chances for an extensive paly of states and presences of his work.

The distance between the photographer and the photographed object was constantly challenged, just as the initial roles of Kossakowski as photographer and Krasinski as “artist–model” were kept in continuous interchange. Their movement consisted of simultaneous and instant action, like in dance. The moment was decisive; what is more, it was bestowed with a two-fold meaning. Each photograph is a stop in time. But in this case, their focus was the infinite though the broken line of the blue strip, or the Spear as if looking for its place, or the artist fumbling for a lost end. This is the course, while each “stop” of the photographic camera captures its fragment. Therefore, each photograph exists as a whole and, at the same time, as an element of the whole—in a given moment.

What is important is the fact that the interaction and the interchange of roles between Krasinski and Kossakowski (artist–photographer–artist) has been taking place in both their everyday private lives and the natural environment. In 1960s Poland, they had no intention of making their activities public or introducing them into the official art circuit. The here–and–now was of key importance. The discipline imposed by the decisive moment (or moments) at the very heart of the private is what makes Spears, Blue Bird, Zig-Zag, Devidoir and J’ai perdu la fin photographs of activities as much as photographic activities.
(Anka Ptaszkowska)

The show presents the photographic body of work of Kossakowksi in alteration with sculptural objects by Krasinski as one complex spatial installation. The sculptures on show are “Tubes” (ca. 1969), “Bobbin” (1969), “Interventions” (1981, 1992, 1994).