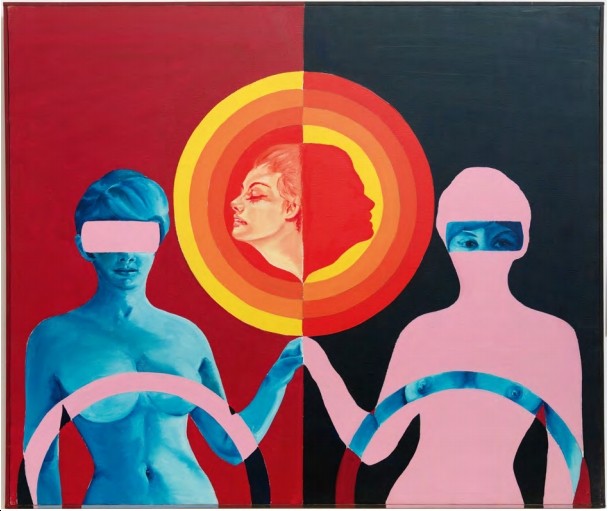 We are pleased to announce the second solo exhibition of Belgian artist Evelyne Axell (1935 – 72) at BROADWAY 1602.

Axell invented a genuine proto-feminist perspective on Pop Art iconography in the 1960s and early 70s. Axell was an acclaimed theater and film actress and screenwriter, before she turned to painting, tutored by the Surrealist René Magritte. The female eroticism in Axell’s work constituted a challenge to art world conventions of her time.

THE GREAT JOURNEY INTO SPACE shows the artist’s interest in female space travel as well as the dimension of allegorical space in her work. The subject was prominently fashioned by the majority of Pop Artists at the time (e.g. Richard Hamilton and Robert Rauschenberg). Other women artists in Axell’s social proximity engaged into the Space Age iconography and enthusiasm such as Niki de Saint Phalle, Alina Szapocznikow, Pauline Boty, and others.
Axell arrived at the motif with the most consistent investment of all of them. Evidently seeing an emancipatory and self-transgressive potential in the female space travel theme, it became one of her leading subjects. In 1966 she created the assemblage painting Valentine, - a homage to the first female cosmonaut and Communist hero Valentina Tereshkova. The idealized female figure in Valentine has a zipper on her body representing the space suit and an astronaut helmet the artist attached next to the figurine on the canvas (it was a toy helmet of her son). In the following year Axell contour-cut canvasses into the shapes of female nudes wearing helmets. She sank these canvas sheets into a newly invented plastic matter in a factory in Belgium and composed a frieze in the style of a Matisse of joyously flying figures like as dance in space. The result was an translucent impressive mural she titled The Great Journey to Outer Space (Grande Sortie dans L'Espace, 1967), today located in the Musée des Beaux-Arts D’Ixelles, Brussels.

In 1969 Axell organized a Happening at Foncke Gallery in Ghent, Belgium, bringing into the crowd a young woman wearing nothing but an astronaut helmet, which disguised her identity (being the wife of a well known collector who had mingled before with the audience). Against the background of a languorous music Axell then dressed her model starting with her stockings, panties, and bra, with a ‘sensuality that sent the audience into ecstasy’, seductive like a reversed striptease. The evening ended with a stormy debate led by French leading critic Pierre Restany on “Sexual Revolution in Art”.

The “Happening” was documented in photographs and Axell used some of the motifs as signature iconography in later paintings, such as the image of Pierre Restany in dramatic pose pointing to the future in Axell’s prominent May ’68 history painting Le Joli Mois de Mai.

The project THE GREAT JOURNEY INTO SPACE brings together prominent paintings, drawingsand archival exhibits relating to Axell’s visionary and limitless ideas of space.

An iconic duo of works is “Seule, une femme” and “Le Timide Embryon” (1965) which depicts a female protagonist inside of a Pop-stylized womb or egg-shaped structure, an extreme vision of reversed, internalized and paranoid space. The psychological stylization of these scenes resonates with the elegiac sci-fi visions in Stanley Kubrick’s later 1960s cult film “2001: A Space Odyssey”.

The rare almost life size screen-painting “La Cloture or La Cloison” (1967) shows two female nudes guarding a portal to another dimension yet undefined, while the painting “La Conductrice et son double ou Les DS” (1965) engages with the mirror stage of the self - a split identity or schizophrenic psychological space.

“Cercle Vicieux / Sans titre” (1969) is the only painting in Axell’s oeuvre depicting a male nude. It shows the abstracted male body, esoteric and translucent, flying unattached in space just as departing into uncharted territory. The prominent drawing “Val Vert” meanwhile portraits a female body floating in space in a dramatized terminal state of transcendence.

In Gallery II we show a museal presentation of photographs, sketches, drawings and archival documents of Axell’s working period as a visual artist, her groundbreaking experimentation and pioneering ventures.

We present here the artist’s outstanding “Autoportrait” (1971) and the unique collage painting “La Machine érotique ou Conception du Mec Art” from the first year of the artist’s painting practice in 1964. Also on show is one of her rare sculptures, “Femme au serpent” (1969), a ready-made bronze antique copy, which Axell manipulated with painterly interventions. The “Preparatory drawings for L’Assemblée Libre” (1970) are based iconographically on scenes from the “Happening” that took place the year before, presented as photographic portfolio in Gallery I.