Experiments In Art And Technology (E.A.T.)’s The New York Collection For Stockholm Portfolio (1973) 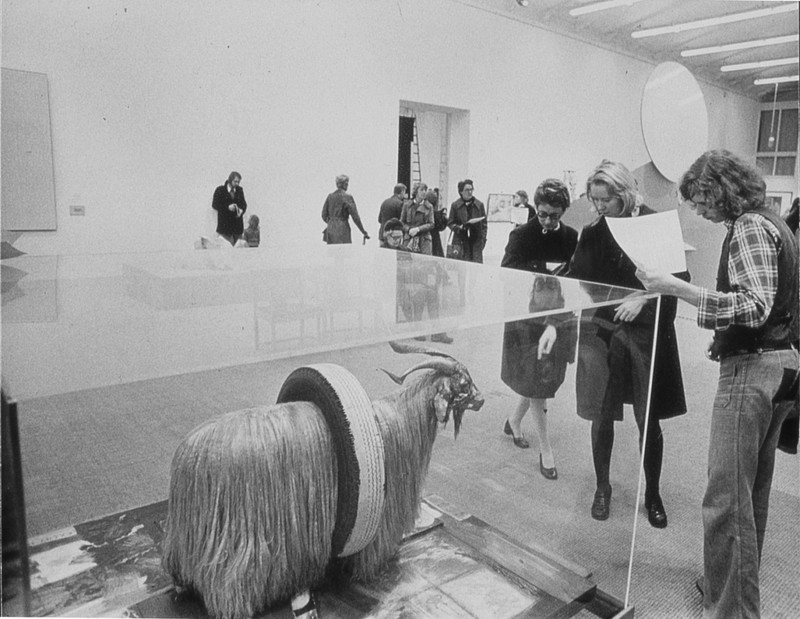 Robert Rauschenberg's combine, Monogram, in the exhibition at Moderna Museet in October 1973, that showed works in The New York Collection, together with works by American artists already in the permanent collection of the museum.
EXPERIMENTS IN ART AND TECHNOLOGY (E.A.T.)’S THE NEW YORK COLLECTION FOR STOCKHOLM PORTFOLIO (1973)
7 May – 1 July 2016

In 2016/17 BROADWAY 1602 presents a series of events at the occasion of the 50th anniversary of Experiments in Art and Technology (E.A.T.). In this context, we are delighted to present the E.A.T. project The New York Collection for Stockholm at our new gallery premises BROADWAY 1602 UPTOWN.

“Beginning in January 1971, E.A.T. undertook a large-scale effort to assemble a major collection of 30 works by New York artists of the 1960s, raise funds to purchase the collection, and donate it to Moderna Museet in recognition of the museum’s long-time support of American art and artists. In the fall of 1971, the works were shown at the gallery building at 420 West Broadway in New York and for the occasion we had a dinner at Rauschenberg’s for Princess Christina, who was the honorary patron of the collection. The New York Collection for Stockholm opened at Moderna Museet in October 1973 with 105 American guests attending the opening.”

The illustrious list of participants represented the very core of New York’s pop, minimal and conceptual avant-garde of the 1960s and 70s, among them female artists Lee Bontecou and Louise Nevelson. The print work in The New York Collection for Stockholm Portfolio is highly original and represents quintessential expression of each artist, which makes the portfolio a very significance exhibition and time witness in itself.

“It embodied the range of new work of the early and middle 1960s: geometric abstraction, Pop Art’s depiction of everyday materials and themes from the mass media, the use of industrial fabrication by Minimal artists, incorporation of new technology, and the reintroduction of politics into art as reaction to the Vietnam War.”

The cultural, political and social history that surrounds The New York Collection for Stockholm – including priceless anecdotes of the bohemian continuum between the New York and Swedish art communities – gives a vivid picture of the interactions among the artists in the midst of the geo-political tensions of the time.

The project also exemplifies once more E.A.T.’s creative and impactful ways of fundraising for the arts and unthinkable generosity by today’s standards of the associated artists and dealers to support institutions and initiatives in such major ways that changed the cultural-political landscape of the time.

In May 2016, BROADWAY 1602 UPTOWN will present the The New York Collection for Stockholm Portfolio of 30 artist prints, other art works and documentary material relating to the project’s history.

For a deeper insight into the project’s history read more below.

As part of the fundraising effort, the 30 artists in the Stockholm collection agreed to make a print for a portfolio that could be sold to support the project.

E.A.T. worked with Addi Rischner at Styria Studio in New York, a print making studio that had worked with many artists. They decided to keep the size of the prints small, 9 x 12 inches, and limited to what was called a ‘one-strike’ print, i.e. black and white, although the artists could of course do what they liked, and they did produce a great variety of printed works.

The portfolio was executed at Styria Studio during 1973, and most of the prints were hand printed on 100 rag papers from lithographic stones and plates and silkscreens in an edition of 300. signed and numbered by the artists.

Many of the prints relate to the works the artists had in the collection itself, including those by Robert Breer, Jim Dine, Claes Oldenburg, and Walter De Maria, who contributed a still photograph from his desert film, Hard Core. George Segal made a record which discusses his first viewing of Marcel Duchamp’s Etant Donnés (Given: 1 The Waterfall, 2. The Illuminating Gas), at the Philadelphia Museum of Art; John Chamberlain printed his image on transparent plastic; Andy Warhol used a Xerox machine to make his prints sequentially from a Mao drawing, using each copy as the original for the next print in the edition; Robert Whitman made a double-sided print; Roy Lichtenstein used an image that had been on the poster he had made for the American Pop Art show at Moderna Museet in 1964; and Robert Rauschenberg made a print from a preparatory drawing for his Combine with the stuffed goat, Monogram, which had been in the collection of Moderna Museet since 1964. The Portfolio is also notable for prints by sculptors who rarely worked in this medium: John Chamberlain, Robert Breer, Louise Nevelson, and Richard Stankiewicz,

E.A.T. worked with sculptor and master craftsman Peter Ballantine, who made a wooden box of Honduras mahogany to house the 30 prints. Only a few of these boxes were made before the wood was declared an endangered species and export stopped. Most of the portfolios were housed in a cardboard box and slip case designed by Robert Rauschenberg.

DEEPER INTO THE BACKGROUND STORY

Beginning in January 1971, Experiments in Art and Technology (E.A.T.) undertook a large fundraising effort to raise money for E.A.T. and support the artists by assembling a major collection of works by artists active in New York in the 1960s, raise funds to buy it, and donate the full collection to an American museum.

It was to be part of a government program in which Treasury Funds were used by the US government to give funds to organizations that matched gifts they gave to the government. Whitman and Klüver devised the idea to build a collection of contemporary American artists to be given to an American museum. The galleries representing the artists agreed to waive their share of the sales of the artworks and E.A.T. would pay the artists their full share.

E.A.T. approached Pontus Hulten, director of Moderna Museet in Stockholm, to choose the collection, because of his long-time interest in and support of American art and artists at the museum.

Moderna Museet, under Hulten’s tenure, was the first European museum to mount exhibitions devoted to contemporary American art in the 1960s with groundbreaking exhibitions such as “4 Americans: Johns, Leslie, Rauschenberg, Stankiewicz” (1962); “Pop Art” (1964); the performance series “5 New York Evenings” (1964); as well as one-person exhibitions of Claes Oldenburg(1966) and Andy Warhol (1968).

During the course of assembling the collection, the application for Treasury Funds was denied, and Hulten asked that the collection be donated to Moderna Museet. Billy Klüver and the artists agreed, again because of Hulten’s long time support of their work.

Mayor John V. Lindsay acted as Chairman of the Collection when in the fall of 1972, all the works in the New York Collection for Stockholm were shown in three galleries — John Weber Gallery, Sonnabend Gallery and Castelli Gallery — in the gallery building at 420 West Broadway in New York. For the occasion E.A.T. hosted a dinner at Robert Rauschenberg’s studio for Princess Christina, the artists, collectors, and other sponsors of the collection.

During the selection process, Klüver remembered that Teledyne Corporation in California had worked with Rauschenberg on a large sculpture, “Mud Muse”, in a project with LACMA: The Los Angeles County Museum of Art, and he asked Teledyne to donate “Mud Muse” to the collection. The corporation agreed and this major work joined the New York Collection. The artists and their dealers were generous in making major works available for the Collection.

The Swedish government contributed matching funds to the purchase of the Collection. To help E.A.T. with raising the remainder of the funds, the thirty artists in the collection agreed to make a print for a portfolio that could be sold to support the project.

The New York Collection For Stockholm opened at Moderna Museet in October 1973 with 105 American guests attending the opening. They traveled on a special charter flight organized by E.A.T. with Scandinavian Airways.

Check-in was at the Swedish Embassy on Park Avenue with buses delivering the travelers to the plane. Red Grooms created an in-flight menu and Klüver organized the films on the plane: Pontus Hulten’s Ein Tag in der Stadt [A Day in Town], and Rene Clair’s Le Million.

The group of artists and collectors in Stockholm were largely unaware of the political controversy swirling around them during the visit. A group of Swedish artists attacked the Collection as inappropriate for the museum to support, asking “Why not show Vietnamese art?”, not understanding that the American artists were as opposed to the war as they were. The filmmaker Emile d’Antonio, known for his anti-McCarthy and anti-Vietnam-war films, was a guest at the opening and had written a text on the political climate of the 1960s in the exhibition catalogue.

It also seems that two governments saw the event as a way to softly make contact, after relations became strained due to the Swedish government’s open opposition to the American engagement in Vietnam. At a gala dinner at the Foreign Ministry, both Nancy Hanks, Director of the National Endowment for the Arts, and John Brademas, a Congressman who was a large supporter of the arts, were in attendance.

The collection of painting and sculpture represents a broad overview of artistic activity in New York in the 1960s. It included artists working in many genres and styles prevalent during that period: It embodied the range of new work of the early and middle 1960s: geometric abstraction, Pop Art’s depiction of everyday materials and themes from the mass media, the use of industrial fabrication by Minimal artists, incorporation of new technology, and the reintroduction of politics into art as reaction to the Vietnam War. The New York Collection for Stockholm represents these new directions in a succinct yet impactful group of thirty artworks. When seen in retrospect, the collection is critical in terms of its significance in the trajectory of post war art practice in New York.