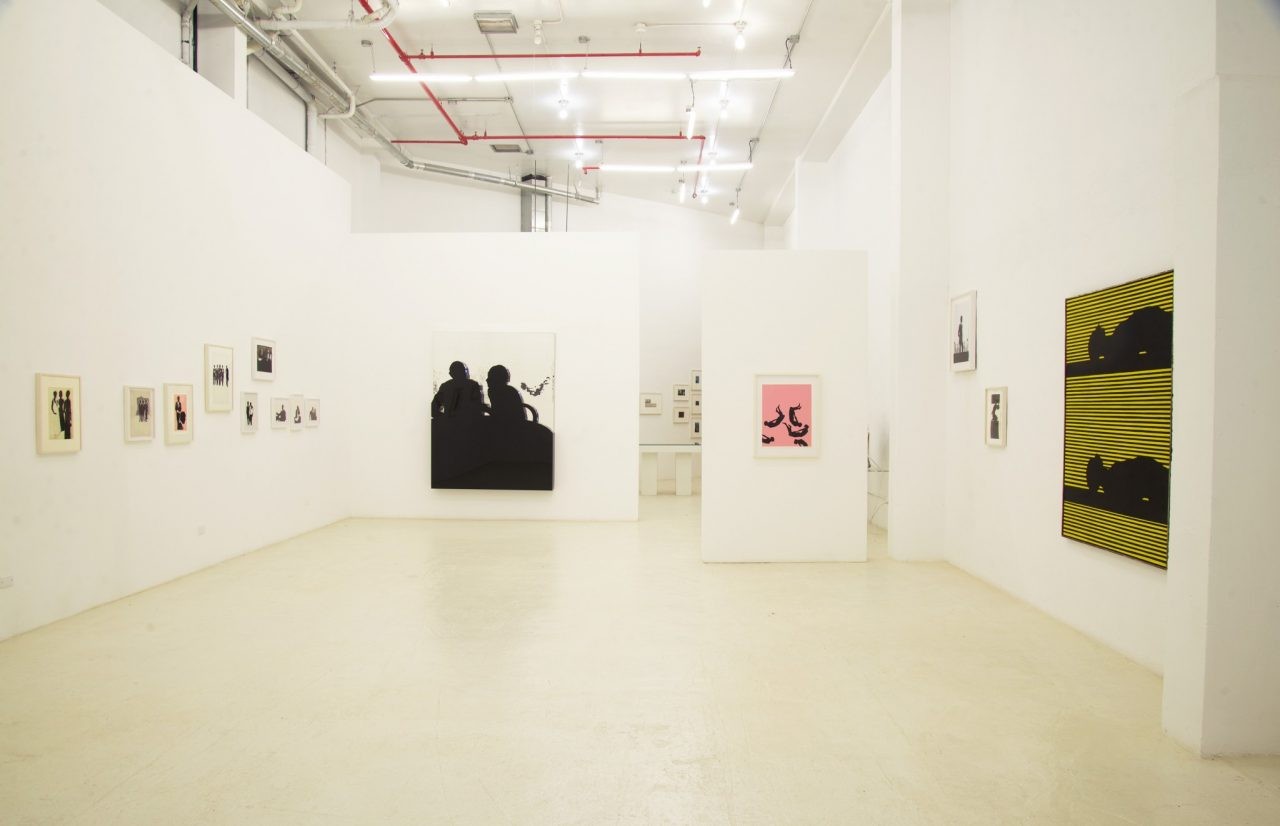 Yesterday my life was filled with rain
You smiled at me and really eased the pain
Now the dark days are gone, and the bright days are here

Thank you for the facts from A to Z
My life was torn like wind-blown sand
And a rock was formed when you held my hand (oh, sunny)

What was Idelle Weber’s idea when she chose Bobby Hebb’s 1966 love song “Sunny” as the title for her plexi sculpture from 1969 showing the anonymous life size black silhouettes of a man and woman involved in an intense gathering in front of a large wall of mirror tiles? A conversation of a couple in love? A first date maybe in a bar? The song is so full of romanticism and dedication, and yet in Weber’s composition the male figure is reminiscent of her numerous scenes of men in black suits in New York’s corporate office world dominating the work force, while the female silhouette in “Sunny” is reminiscent of other pieces by Weber where women in the 1960s office world appear in subordinate positions, e.g. as secretaries ‘ready for dictation’. However, different to these office scenes where women are at the margins of the scenes, the female figure in “Sunny” is positioned in the center and her pose dominating the scene. She is actively engaged in the conversation leaning forward to the more passive and slightly backward leaning male figure. At the same time the two black silhouettes form one continuous body. The tableau invites interpretation, even a certain ambiguity as to the nature of the gathering and the gender roles at play, most likely a scene on the verge between the professional work sphere and the after-hour opening up an arena for intimacy.

Idelle Weber’s (b. 1932 in Chicago) is one of the most prolific and original female artists of New York’s Pop Art era. A central figure in New York’s 1960s avant-garde circles, she was friends with most of the major female and male artists of the time such as Roy Lichtenstein, Agnes Martin, Andy Warhol, Sylvia Sleigh, George Segal, to name a few. Like her female Pop Art peers Rosalyn Drexler, Marjorie Strider and Sylvia Sleigh in New York, – or Evelyne Axell and Paulina Boty in Europe -, Idelle Weber not only contested in a proto-feminist fashion dominant gender representations of her time, but also created an alternative, even utopian realm of the female body often involved in extreme and liberating – or dramatically falling – movement (a theme she shared with Belgian Pop Artist Evelyne Axell who painted flying female nudes as a utopian perspective on space travel). Often the same movement of the ‘free fall’ in Weber’s works involves both dynamics at once creating an ambivalent rhetoric of the body.

“A concurring sense of movement and repose attends her figures as they are gravely transported upwards or downwards – being led unaware, as it seems to symbolic destinations. There is skill and imagination at work here, and I her obsessive desire to tell us that man is an anonymous shadow. Miss Weber is quickly becoming a sort of Pop-Sybill.”

Weber’s central choice of iconography was absolutely unique in the field of Pop Art. She explored the American cosmopolitan milieu of the 1950s and1960s particularly targeting gender roles in corporate culture, mass media and politics. As her husband was a corporate lawyer in New York’s iconic Lever House (built by Mies van der Rohe in 1950-52), Weber frequently visited the Midtown offices making sketches, which majorly inspired a motif central in her work: ‘The Men in the Office’, black anonymous silhouettes representing prototypes in the 1950s work sphere, the metropolitan hallways of power. As it happened decades later, the trailer of cult TV series “Mad Men” was inspired by Weber’s genuine aesthetic. Weber’s timeless ‘cool’ and dandified style also resonates in the 1980s aesthetic of e.g. “The Men in the City” series by Robert Longo.

Simultaneously Idelle Weber deeply processed the trauma of the Vietnam War and the uprisings of the Civil Rights Movement in her work. The cultural and political underpinnings in Weber’s paintings, drawings, collages and sculptures are deeply imbedded in the 1960s era. In her darker painting series “Ben Casey” (Weber dedicated three large scale paintings to the motif in 1962) Weber combined like Warhol popular culture with the image of mortality and disaster. “Ben Casey” was an American medical drama series which ran on ABC from 1961 to 1966. The show was known for its opening titles, which consisted of a hand drawing the symbols “♂, ♀, ✳, †, ∞” on a chalkboard while a cast member intoned: “Man, woman, birth, death, infinity.” During the Vietnam War, the term “Ben Casey” was used by American troops as slang for a medic.

Idelle Weber was prominently presented at the Brooklyn Museum show “Seductive Subversion: Women Pop Artists” in 2010. Recent prominent museums acquisitions include her iconic black plexi and neon sculpture “Woman with Jump Rope” (1964) at LACMA in Los Angeles, on view in the collection this Spring, and the “Lever Building” (1970) work on paper at the Whitney Museum in New York, also currently on view in the collection.

This Spring we are delighted to present Idelle Weber’s first solo exhibition in our Harlem gallery.