Five Sides and Other Dimensions 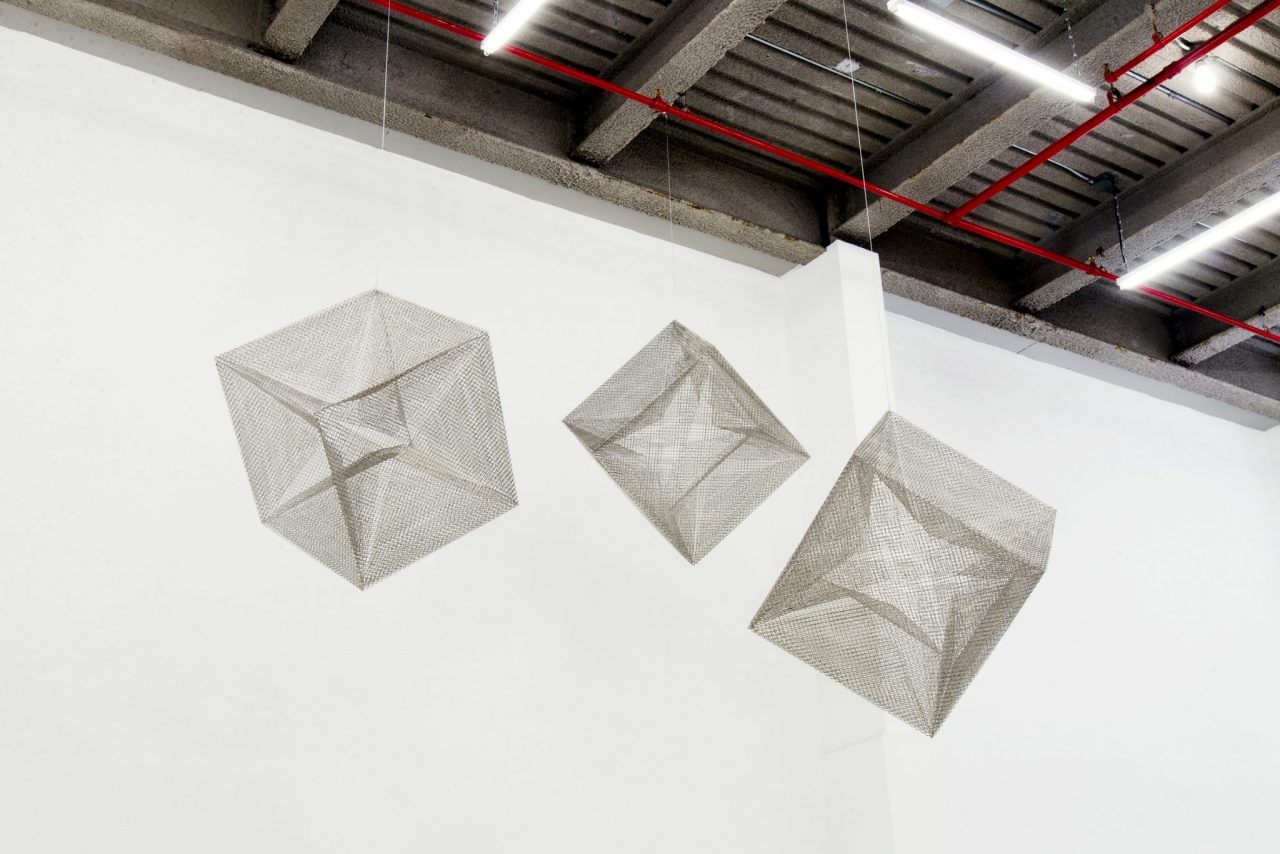 “WITH MINIMUM INTERVENTION, I TESTED BEYOND THE REALMS OF PHYSICAL LIMITATION AND DISCOVERED THAT GEOMETRIC LANGUAGE WAS AN INTELLIGENT WAY TO EXPRESS SIMPLE, CLEAN, CONCISE, TRUTHFUL, HARMONIOUS, CONCEPTUAL IDEAS.

“I UNDERSTOOD IT WAS OKAY TO MAKE ART IN A SPONTANEOUS WAY, USING THE MINIMUM NECESSARY IN ORDER TO EXPRESS AN IDEA. FLEXIBILITY AND CLARITY OF MIND HELPS ALL THE TIME. WHEN THE WORK IS DONE, IT RESONATES SOME KIND OF VIBRATION, WHICH YOU MAY PERCEIVE AS SPIRITUAL, INTERNAL MUSIC. I THINK THAT AN IDEA IS AN ENERGY THAT TRANSMITS AND EXISTS IN ITS OWN. I WANT TO EXPRESS THE IMMATERIALITY IN EVERYTHING.

“I LONG TO COMBINE THE IDEA OF DIMENSIONS—FROM THREE-DIMENSIONAL TO FLAT SURFACES—TO MULTI-DIMENSIONS PERCEPTIBLE BY THE MIND.”

(LYDIA OKUMURA IN “GEOMETRIC LANGUAGE, AN INTERVIEW WITH LYDIA OKUMURA ABOUT HER NOT-SO-STRAIGHT-LINE TO ARTISTIC PROMINENCE”, BY CYNTHIA GARCIA IN NEWCITY BRAZIL, 2017)

We are delighted to announce our first solo show by Brazilian artist Lydia Okumura.

Lydia Okumura was born in São Paulo in 1948 to a Japanese immigrant family.

In 1970 – inspired by the Tokyo Biennial and her readings of the Japanese art magazine “Bijutsu Techou” – the Brazilian Okumura oriented her work distinctly towards the international new art movements of Conceptual Art, Minimalism and Land Art.

After the presentation of a ground-breaking installation with the collective Equipe3 (with her artist peers Genilson Soares and Francisco Iñarra) at the 1973 São Paulo Biennial, Lydia Okumura was granted a 4-year scholarship at the Pratt Graphics Center in New York, where she was to live and work further on.

In the following years, Okumura exhibited some of her most seminal multi-dimensional geometric painting and string installations – termed “Situations” – in various galleries, institutions and collectors’ homes in New York City, Brazil, and Japan. Okumura’s work constitutes a unique intersection between these three geographies and their radical avant-gardes.

Since the last five years Lydia Okumura’s work receives an impressive re-discovery in the U.S., Europe and Latin America in shows, acquisitions and press coverage. Her first and still touring retrospective exhibition “Situations” opened in 2016 curated by Rachel Adams at the University Galleries in Buffalo. The show presents a prominent group of Okumura’s early conceptual work and her pivotal painting, string and mesh installations, alongside her exceptional oeuvre of drawings from the 1970s and 80s and her earth art pieces, first realized in 1972 in Sao Paulo.

The exhibition “Situations” elaborates for the first time in the U.S. on the phenomenon of the intriguing simultaneity of Okumura’s work with American Minimalists Fred Sanback, Sol Lewitt and others.

“Modern sculpture’s use of industrial materials evokes a decidedly romantic notion of masculine middle class labor, one that artists like Jackson Pollock and Carl Andre used to posit themselves as the artistic “everyman.” This is why, perhaps more so than any other artistic medium, sculpture is wrought with gendered nuances and contradictions.

“Okumura’s work presents an aesthetically tantalizing contradiction between force and fragility. With this in mind, Okumura’s placement within, or, rather, a critical and unjust absence from the Minimalist movement becomes apparent. Her conceptual geometric experiments rival her cross-national contemporaries and deserve additional critical exploration and adulation. The visual magnificence of Okumura’s work is blinding, effectively demolishing any remnant of gender, race or nationality.” (“Between Force and Fragility: Lydia Okumura and the gendered nuances of Minimalist sculpture”, by Scotti Hill, 2017)

For our gallery show FIVE SIDES AND OTHER DIMENSIONS at BROADWAY 1602 HARLEM Lydia Okumura creates a group of even more radically minimalized geometric installations than realized in recent shows. We see a color reduction of blue, black and white in installations made of her signature materials string, glass and metal. The pre-dominant shapes are the pyramid and the cubes morphed into conceptual alteration and modulation.

The works are based on unrealized conceptual formulations from the 1970s and continuations of sculptural projects from the 1970s and 1980s, like Okumura’s suspended mesh metal cubes, first realized at the Museu de Arte Moderna, São Paulo for her large-scale solo exhibition in 1984. The mesh cubes appeared in 1984, when the artist was invited to create a large exhibition in a very short time, and the material was made available by the museum. Lydia Okumura’s relation to material appears in temporary conceptual manifestations. Her understanding of oeuvre is that of a constant continuity of style of experimentation rooted in the avant-garde initiations of her beginnings. Like in the work of Polish concept and minimal artist Edward Krasinski, who continued throughout his life to apply his signature device of the blue horizontal scotch tape line (outside of the dynamics of art market affirmation of style), there is a very low sense of ‘period’ and original materialization in Okumura’s work. Most of her installations are “Situations”, works that get realized in one specific place at a time and disappear after exhibition.

More than in recent shows, Okumura minimalizes in her new gallery show FIVE SIDES AND OTHER DIMENSIONS her language to the most primary, translucent and lightest of forms, and to an austerely reduced color shading. The module of the pyramid appears in one of Okumura’s earliest metal and acrylic foam sculptures Untitled (1971-72) on show, and continues in her most recent concept for an earth art piece in the positive/negative form of “Five Sides” (2015, first realized in a BROADWAY 1602 OUTDOOR project in Connecticut), documented now in the ‘non-site’ of the gallery.

“The works are simple, visual, even a child can figure them out. Walking, sitting, lying down. We think we are this body, – but in reality we are consciousness. The visitors’ experience is a consciousness reflecting itself almost like in a mirror, you are reflecting yourself, what happens inside you is the experience, and that experience is also my work.

I am just adding a little bit of information to this world, – a moment of peacefulness where you don’t have to think about anything else apart from what you experience in the space.” (Lydia Okumura, conversation with Anke Kempkes, New York, August 2017)
www.broadway1602.com