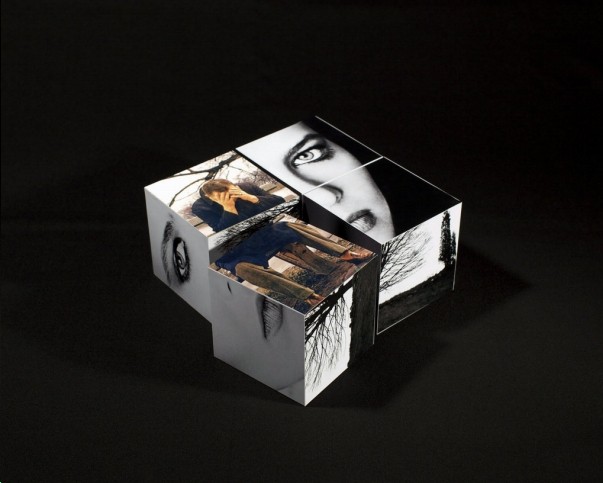 Los Angeles based Polish-German photographer Margarete Jakschik presents her most conceptual series of photographs to date, based on the pictorial potentials of the photo-cube.

The EITHER / OR series of six variants presents a complex duality of ‘polyphonic’ visual economy and composition.

Friedrich Kunath titled these poetic image successions “Lebensfugen” (“Life Fugues”), comparable to the musical structure of the psychiatric state of the fugue:

1. (Music / Classical Music) a musical form consisting essentially of a theme repeated a fifth above or a fourth below the continuing first statement
2. (Psychiatry) a dreamlike altered state of consciousness, lasting from a few hours to several days, during which a person loses his memory for his previous life and often wanders away from home

From the point of this definition Kunath describe these works as mathematical, pseudo-systematized understanding of longing: “The
cube-variations form a kind of ‘cubist psychosis’ in which the play of memory and reality drive for a new definition. When one speaks of a "dreamlike altered state" then this occurs as a better definition for “memory” as this formulation questions already the notion of reality itself. If one merges the two definitions of the ‘fugue’ then the symphonic, or in the case of the pictorial – a synaesthetic dynamic rises: the melodrama, the melody of abandonment, the sick tree and the promise of Spring....”