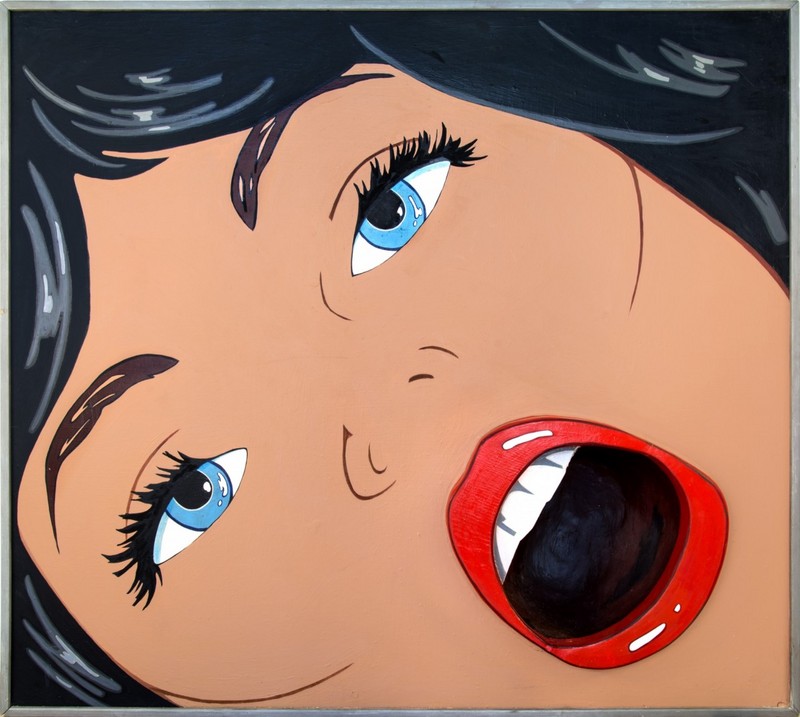 Like her European women contemporaries Evelyne Axell and Pauline Boty, Strider has taken on some of the most iconic motifs of Pop Art from a distinct female perspective of exuberant counter-appropriation. Her prominent joyfully provocative relief paintings of the ‘Bikini-Nudes’, the comically lascivious ‘Girl’ faces and cooly eroticized ‘Giant Vegetable’ are amongst the most memorable works of the Pop Art decade.

A spectacular reintroduction of Strider’s work took place in the 2011 exhibition “Seductive Subversion: Women Pop Artists, 1958 – 1968”, at the Brooklyn Museum.

The show featured among other iconic pieces, such as “Girl with Radish” (1963), Strider’s imposing “Triptych II, Beach Girl” (1963), one of the pivotal works from the period, – currently on show at the “International Pop” exhibition at the Walker Art Center (and Dallas and Philadelphia Art Museum).

Marjorie Strider premiered “Triptych II, Beach Girls” in the legendary “First International Girlie Exhibit” at Pace Gallery in 1964 alongside Rosalyn Drexler (as the only other female artist), Claes Oldenburg, Roy Lichtenstein and other prominent Pop artists. The show was featuring the female pin up as the center motif of American Pop Art. It was a spectacular debut for Strider receiving a massive coverage and debate in the press already at the time.

Marjorie Strider explored in her rich oeuvre of paintings, drawings, collages and performances, the animated nature of female nudes, plants, consumer culture and mundane objects, fearlessly building her radically contemporary Pop renderings on predecessors such as Manet, Cézanne, Picasso, the Surrealists, Georgia O’Keeffe and Japanese artist Katsushika Hokusai. In the 1960s New York milieu her work opens a fascinating dialogue with the work of De Kooning, Warhol, Wesselman, Oldenburg and others.

Strider called her three-dimensional Bikini Nudes, Flowers and Vegetable “build-outs”. They literally protrude into the spectator’s sphere, expanding the boundaries of painting into real space. The dynamic tension between the flatness of her acrylic based painterly style with the three-dimensional confrontation of her resin reliefs, creates a constant push and pull between painting and sculpture.

Originally the “build-outs” had been carved out of wood and laminated. The artist enjoyed the “sheer physicality” of this primary sculpting process. Later Strider decided to use lighter and more flexible materials such as epoxy coated styrofoam. Like other women artists of the period, Marjorie Strider was a pioneer in her experimentation with the then new plastic materials.

In the late 1950s Strider produced a series of paintings and drawings titled “Flat Plants”, dark silhouettes in cool settings in context of and yet predating Roy Lichtenstein’s “Black Flower” or Warhol’s “Flower” silk screens and Alex Katz’s late flower paintings. Strider reacted at the time to hard-edge and Color Field painting of e.g. Kenneth Noland and Ellsworth Kelly.

The flower motif remained a preoccupation of Marjorie Strider alongside the vegetable, but soon the motif emancipated out of the dark flatness into the light of sexual metaphor, as the painting ”Girl with Rose” (1963) exemplifies which can be seen as a fetish of female sexuality positioned like a gently touching ornament next to the girl’s face, in opposition to the “Girl with Radish” carrying male exploitative sexual connotations with the radish comically positioned straight in the girl’s open mouth.

In 1965 Marjorie Strider had her first solo show in New York at Pace Gallery titled “Girls, Flowers, and Vegetables.” With the giant asparagus “Green Vertical” (1964) Strider also revealed her sophistication in taking on a particular heritage moment of Impressionism. The piece updates in the time of the market hype of Pop Art era the exceptional story of Manet’s “A Bunch of Asparagus” (1880).

Manet sold the painting commissioned by real estate financier Charles Ephrussi (once employed by Marcel Proust and considered to be one of the inspirations for Charles Swann in Proust’s “À la Recherche du Temps Perdu”) for eight hundred francs. But Ephrussi sent him a thousand francs, and Manet, with elegance and wit, painted another single asparagus and sent it to Ephrussi with a note saying: “There was one missing from your bunch”.

“Lima Bean” is an example of how Strider was able to diffuse the in-your-face comic obscenity of the earlier Girlie work without diluting their implied sexual content. In contrast to Hesse, whose art became more abstract towards the end of her life, Strider found ways to stretch the figural.”

In the beginning 1970s Marjorie Strider realized an impressive body of work, both flat and three-dimensional, in which Pop colored foam pours out of “Nestle” boxes, “Plaster of Paris” bags, from door knobs and even out of the crown of the Statue of Liberty (eerily pre-dating the mega-iconic scenes from “Ghostbusters 2”). The dominant new motif of the toxicity of (urethane) foam pouring out of mundane objects, products and sites, marked the beginning of an psycho-ecological awareness in Strider’s work.

“People in the past have mentioned myself and Lynda Benglis as working with foam at the same period. The difference was she was using it totally abstractly, whereas I was combining it with objects. I would make an object and then the foam would come out of it. It was about entropy and about disintegration and about things that I’m still working with today. At that time we were destroying the world, as we are now, ecologically. And that work was an expression of that.”

The urethane foam work also allowed Strider to extend her work into public art – beyond the static constraints of traditional material such as bronze – instead to be expansive and action based. By the early 1970s she poured colored streams of foam out of building windows and shafts and down staircases.

“Now, I always liked public art; doing public art. When we did the street works in the late 60s and 70s they were in reaction to the gallery system and what I felt was a very limited audience. ...In those days you probably didn’t even walk into a gallery unless you had money. I felt this was very limiting. They didn’t have blockbuster shows at museums like they do now. So my friends, John Perreault, Hannah Weiner, and I invented Street Works. ...When we first decided to do Street Works, we limited the area, it was one city block around 14th Street and we didn’t limit the people, who participate. Of course, anybody who was our friend would hear about it and they would participate. The pieces are really sort of hard to describe because a lot of them were invisible. Scott Burton dressed as a woman and he actually walked by me several times and I did not recognise him. ...I thought if Duchamp thinks anything can be art, I’ll just take a picture frame out and put it around things and take pictures of it. It worked!”

Marjorie Strider has made a tremendous mark in her generation of advancing representational boundaries of post-war modernism into the liberating language of the Pop-era and beyond from the distinctly emancipatory point of view of a woman avant-gardist of her time.
www.broadway1602.com