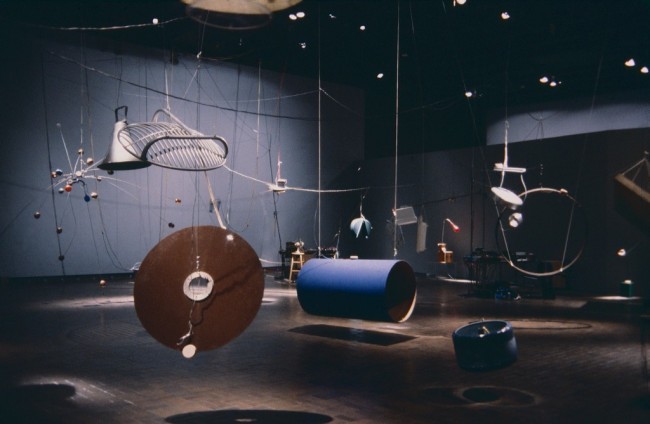 “Pigeonholing the piece is made complicated by the fact that it is actually a ‘performed installation’ combining aspects of sound, sculpture, exhibition, live concert, performance and audience interaction. “Rainforest” in its earliest years was described by Tudor as an “environmental piece” and later was frequently subtitled “An Electronic Ecology”.”

“David Tudor was an enigmatic performer and composer. Tudor had two overlapping careers – one as a world renowned pianist interpreting the works of Cage, Brown, Busotti, Boulez, Feldman, Stockhausen, Wolff and others and a second one as a ground-breaking composer of live electronic music. Using unique configurations of custom-built electronics he pioneered the exploration of acoustical and electronic feedback, resonance, and highly non-linear musical systems.

Tudor approached electronics and composing with equal fervor and was delighted when he was able to “tease” his instruments into highly unstable states sometimes with very raucous results.

He was dedicated to the idea that Rainforest was “self-teaching”. He believed the only way to fully grasp the work was through personal investigation and hands-on experimentation.”

FROM INTERPRETER TO COMPOSER

David Tudor changed directions after some 20 years as a performer and created his first composition “Fluorescent Sound” in 1964, a collaboration with Robert Rauschenberg. His second composition “Bandoneon ! (Factorial)” in 1966 was a technical tour de force as part of the Experiments in Art and Technology’s now legendary “9 Evenings of Theater and Engineering”.

In 1968 Tudor received a commission to create music for a dance by Merce Cunningham titled “RainForest”. Tudor took on the same title for his sound piece. This first version of “Rainforest” used eight tabletop-sized objects through which sound was driven and then re-amplified into the performance sound system using phono cartridges as vibration microphones. In subsequent versions Tudor used tone oscillators as the sound sources that were fed into the objects.

RAINFOREST IV – FROM COMPOSER TO COLLABORATOR

A breakthrough came in 1973 when Tudor, after having created a number of Rainforest versions, decided that he wanted to change the concept of the work and invited collaborators to contribute to its realization. He presented the work to a group of young artists and composers at the New Music in New Hampshire festival in the summer of 1973. The workshop participants included: John Driscoll, Phil Edelstein, Linda Fisher, Martin Kalve, Ralph Jones, Greg Kramer, Susan Palmer, and Bill Viola. The participants delighted Tudor by working with large objects, which needed to be suspended in order to resonate freely creating a new visual element to the work.

All of a sudden a new version emerged that was both a sound and sculptural environment that the audience was free to wander around in and listen directly to the objects. This was the beginning of what later was to become “Rainforest IV”. The group wanted to continue to perform the work, and Tudor agreed to the group performing the work.

“Rainforest IV” was a unique work and revolutionized the idea of sound art, performance art, and sound installations. In the early 1970’s there was really no work quite like it. The work realized Tudor’s vision to create sonic architecture. It was typically performed by between four to ten performers each responsible for creating their own sound materials and objects for generally a continuous six-hour period.

After a number of performances of the work, Tudor was invited in 1976 to produce a series of works for the Paris Automne Festival. In order to present not only his works, but also works of the group, a name for the group became necessary. Tudor and John Driscoll settled on Composers Inside Electronics (CIE) in order to emphasize the concept of starting with the electronics and letting the music evolve from their potential. The group for the Automne Festival now consisted of: John Driscoll, Paul DeMarinis, Phil Edelstein, Linda Fisher, Martin Kalve, Ralph Jones, and Bill Viola. This became the core of CIE to continue performances both with and without Tudor until the early 1990’s.

“Tudor conjured from the electronics the means and spirit for essential transcendent human expression rooted in the fundamentals of engineering and science. These fundamentals used as platform for expressive excursions. There’s mastery in these structures of a simple idea of feedback and modulation that gives rise to monumental structure – the crafting of howls into symphonies. The act of folding input to output gives rise to expansive new worlds. The works he created and discovered, charted and populated new territories for Composers Inside Electronics. The mechanics of resonance was fundamental to his aural expression. His devotion to the collaborative process was one of his greatest gifts to the group.”

RAINFOREST V – FROM PERFORMANCE TO INSTALLATION

The work has received numerous performances worldwide. With Tudor’s passing in 1996, CIE decided to continue performing the work. In 2009, John Driscoll, Phil Edelstein, and Matt Rogalsky created a self-running installation version of the work for Arte Alameda in Mexico City, now titled “Rainforest V” to distinguish it from the performance version “Rainforest IV”. “Rainforest” is seen today as a one of the pioneering and most legendary works of sound art.

We are delighted to present “Rainforest V” in its site-specific nature at BROADWAY 1602 in January – February 2015. It is realized in our space by John Driscoll and Phil Edelstein, the remaining active members of Composers Inside Electronics who over 40 years not only updated the piece technically, but continued and extended the legacy and aesthetic concept of “Rainforest”.

Our special thanks go to John Driscoll and Phil Edelstein (Composers Inside Electronics) for a year of passionate debate and teaching of the archeology and legacy of “Rainforest” and David Tudor’s visionary aesthetic concepts.
We thank Mimi Johnson (Performing Artservices, Inc.), Jean Rigg (David Tudor Trust), and the Estate of David Tudor for the opportunity to realize “Rainforest V” at BROADWAY 1602.

We also thank our outstanding collaborator Julie Martin (Experiments in Art and Technology) for her initial mediation of the project and the Merce Cunningham Trust for their support.

BROADWAY 1602 is publishing an introductory catalogue on “Rainforest” to be available throughout the show.
www.broadway1602.com