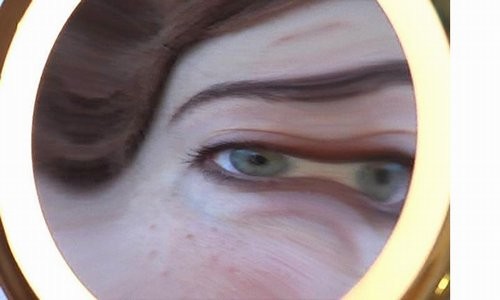 New York based Video and Performance artist SHANA MOULTON invented a genuine feminist aesthetic after postmodernism: the creative language of hopeless but touching disfunctionality, characterized by elegiacally desperate urgencies and escapist worlds of petty pop refuge, driven by a radically mediated esprit of liberation.
In a continuing series of films SHANA MOULTON creates her notorious alter ego ‘Cynthia’, a highly discouraged woman, in a red wig, (reminiscent of Cindy Sherman’s mildly disturbing impersonations), who fails to face the conditions and challenges of a contemporary everyday life. Tortured by the tristesse of her social isolation and personal idiosyncracies, she develops a bizarre agency, leading her to find temporary release in a parallel universe of companionship, inhibited by artistic idols (such as Piet Mondrian and Georgia O’Keeffe) and pop cultural creatures.
The ‘neon’ color temperature and studio realism of amateurish interiors in MOULTON’s films recall the early video art aesthetics of the late 70s/early 80s. She works consciously in regard to influences such as Maya Deren, Michael Smith and Eleanor Antin.
In her performances SHANA MOULTON acts as an integral part of the video projection. In a recent live performance at Gimpel Fils (London) and Electronic Arts Intermix (NY) the artist came out to the audience in white overalls on which the projection reflected. She became part of the video and started to dance with the creatures of her own filmic imagination.
For the sound tracks of her films SHANA MOULTON creates sound collages. She is very specific by bringing up references to women composers from the 1970s such as obscure psychedelic folk singer Linda Perhacs. In her new film project SAND SAGA she uses elements of the Nicholas Roeg movie "Don't Look Back"- a thriller from 1973 starring Julie Christie and Donald Sutherland.
"It relates to previous works of mine, since the soundtrack is done by the same person (Pino Donaggio) who made the soundtrack to "Carrie", which I reference in the performance I did this summer. And the scene this music was originally made for, a notorious sex scene, is in total contrast to the scene I am editing it to: applying a mud/beauty mask and waiting for it to dry.
I also like to use different versions of a song to signify a transition to an alternate world – I used 3 different versions of the Enya song "Orinoco Flow." In the beginning while Cynthia is in her home making a flower arrangement, I use a cheap midi version of the song, when the ladder appears and she magically climbs it, I use the real version of the song, and when she enters this new Rave world, I use the techno remix version of the song. This song was also originally used in the commercial for "Crystal Light", the beverage I drink in the video. Techno remixes of songs are especially great for conveying transitions to fantasy worlds or heightened realities. The song from the 'Sphinx' video is from the animated movie "The Last Unicorn" and the voice is Mia Farrow. She sings the song when she is magically transformed into a human - now that I'm a woman everything has changed." (Shana Moulton)

SHANA MOULTON presents a new film installation and will realize a live performance at the opening night and a second performance at the closing night of the show.
Born in California in 1976, SHANA MOULTON studied at Berkeley, Carnegie Mellon in Pittsburgh and attended the "De Ateliers" program in Amsterdam.. She had recent solo shows at Gimple Fils (London 2007) and Bellwether (NY 2007). Her films were screened at various international festivals and she held live performances at The Andy Warhol Museum (2004), at Electronic Arts Intermix (NY 2007) and in many international venues.
She took part in PERFORMA (NY 2007).
www.broadway1602.com