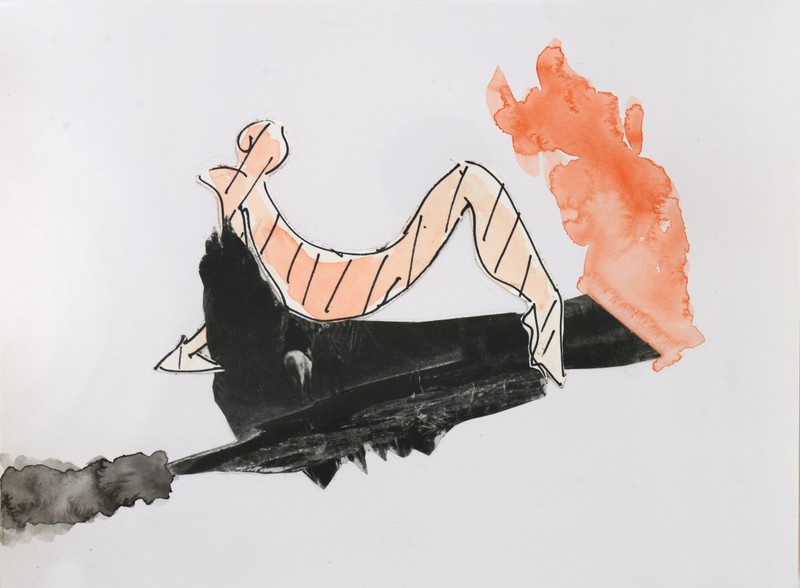 BROADWAY 1602 is pleased to announce our first gallery exhibition of Chilean-American artist Sylvia Palacios Whitman.
We will present a program of performances, installations, works on paper and paintings by this outstanding artist whose work has not been seen in New York since the early 1980s.
Our project coincides with the Whitney Museum exhibition “Rituals of Rented Island: Object Theater, Loft Performance, and The New Psychodrama – Manhattan”, curated by Jay Sanders, where Palacios Whitman’s performance work of the 1970s is re-introduced via film, photographs, note books and an event of life performances.
Sylvia Palacios Whitman was born 1941 in the South of Chile and later studied painting and sculpture at Santiago’s School of Fine Arts. She came to New York in the early 1960s, where she pursued her own work in drawing and painting. She became interested in dance and theater performing with Trisha Brown and Robert Whitman, whom she married in 1968.
“I did study a little ballet, like all little girls. But I always entertained my family in the attic. At the time I just didn’t know it was something you could do. So eventually I’ve gotten to where I always was!” Soon after leaving The Trisha Brown Dance Company Palacios Whitman developed a unique performance style of her own in which she used surreal stage props and giant drawings to create a visual theater that combined a rich Latin-American pictorial sensibility with the minimalism of the New York dance scene. She performed these works at various venues in downtown Manhattan such as artists' lofts, The Kitchen, Sonnabend Gallery, and the Whitney Museum of American Art Downtown Branch as well as the Guggenheim Museum. Her performers were non-professionals whom she casted from her milieu or through chance encounters:
“I go to church. It’s always very natural there and people spring out at you. One day there was an incredible face beside me, and instead of just wondering I said “I’ll use her’”. The ‘her’ tuned out to be Ilse Rumpler, who worked in a Madison Avenue music box store, and became one of Palacios Whitman’s most compelling performers in “South”, her exuberant ‘concert’ at the Guggenheim in 1979.
Palacios Whitman at times used the taped pastoral compositions of Steve Reich to accompany the phases of her performances, happy or melancholic scenes which lined up like three dimensional animate sketches, often informed by autobiographical stories and visions, a “delicate blend of fantasy and the mundane” (Sally Banes, 1979).
The artist makes central use of props, both found and made – such as cup and saucer, envelopes, telephones, beds, skirts, needles and thread and most of all paper -, “weaving phantasmagoria out of material at hand and transforming scale or time to dwell briefly in the marvelous, then moving on readily to the next thing” (Banes). Most of the materials are fragile and ephemeral in character and where often destroyed after the event, apart from her giant “Green Hands” currently on show at the Whitney Museum or the larger-than-life anonymous men in trench coats drawn on the gauze banners in her piece “Negatives” that will be performed in the gallery.
At the beginning of Sylvia Palacios Whitman’s ideas for performances are usually drawings and sketches of exceptionally free spirited imagination. The New York critic Sally Banes called this approach ‘hypnogogic’ (after Sartre’s “Psychology of Imagination”). In this show the walls of the gallery will be covered with these drawings lightly spread out and loosely magnetically fixed behind static plastic sheets. They are the mental initiators of the scenes staged.
The artist herself will perform Human Paper Coil (1974) and Mummies (1977), and direct Elephant Trunk (1975) performed by Michael Leigh; Negatives (1980) performed by Pati Hertling, Michael Leigh and Shie Moreno; as well as Cat’s Cradle (1975) performed by Heidi Olson, Hedi Sorger, Leesa Abahuni, Aniko Erdosi, Pati Hertling, and Nick Mauss.
After the performance nights the props will remain in the gallery space as an ongoing and changing installation.
In another gallery space we will present paintings and collages by Sylvia Palacios Whitman from the 1970s and 80s. These unique works share the sensibility of the performances in terms of the surreal imagination, and the attention to space and props. But the artist enters here a darker realm of subtle grey graphite tones, broken up structures and disintegrated architecture and freed public ornamentation, dynamic spiraling movement, emancipated yet ominous objects and figures, - and political fragments in photographic collaged elements.
These works will be shown alongside a body of performance photographs by Babette Mangolte who documented several of Sylvia Palacios Whitman’s outstanding performances in the 1970s.
In the course of the exhibition the gallery will become a constantly changing environment of the multiple aesthetic practices by this exceptional artist.
Sylvia Palacios Whitman’s work receives an in-depth reintroduction at the Whitney Museums exhibition “Rituals of Rented Island: Object Theater, Loft Performance, and The New Psychodrama – Manhattan,” that is on view thru February 2, 2014. For this museum exhibition Babette Mangolte has made a film of Palacios Whitman restaging her 1978 piece, Cup and Tail.
On January 18, 2014 the artist will perform Cup and Tail and Green Hands at the Whitney Museum of American Art.
www.broadway1602.com