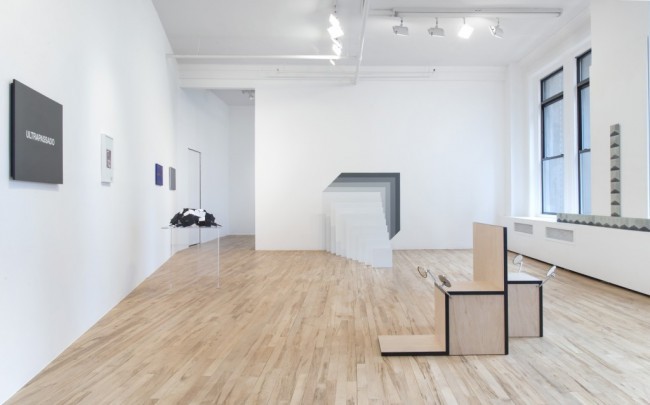 This show takes its title from a text painting by Brazilian artist Lenora de Barros. In Portuguese “ultrapassado” translates into the idea of exceeding, transcending, and overcoming.

This two-part exhibition explores the highly formulated and transitional status of geometrical abstraction in the work of women artists from three generations.

ULTRAPASSADO II centers more on site-specific installations newly realized in our space by Lydia Okumra, Paloma Bosquê and Lenora de Barros. Next to these large-scale interventions we present early wood cuts by (Neo)Concretist Lygia Pape, paintings, drawings and sculptures from the 1960s and 70s by Minimal Artist Rosemarie Castoro, early abstract works by Gina Pane, a rare 1963 painting by Barbro Östlihn, a concrete poetry sculpture by Martha Araújo from 1985, drawings and prints by Dóra Maurer and Samia Halaby.

Women artists in parallel geographic milieus of a shared aesthetic affiliation with geometric art were often invested into abstraction in an experimental, process, and ‘open form’ oriented way. The engagement with geometric and systematic abstraction was then realized as a non-hierarchical practice or passage; one form spectrum favored at a certain time with the same status as parallel or later experiments with conceptual forms, visual poetry, performance and dance, land art, site-specific and time based work. We can see this passage into new practices by the late 1960s and early 1970s, particularly in the work of Lygia Pape, Rosemarie Castoro, Gina Pane, Lydia Okumura, Martha Araújo and Dóra Maurer.

Already in the late 1950s in Brazil, Lygia Pape, Lygia Clark and Hélio Oiticicabroke away from the strict formalist constraints of Concretism with their Manifesto for Neoconcrete Art in which a more open and experimental form was advocated as crossing the boundaries into physical and spatial reality, social interaction, and specific experience.

Meanwhile in New York, Minimalist Rosemarie Castoro began her career as a dancer and choreographer. The decision that determined her practice in the mid 1960s onto the two-dimensional picture plane was based on the exploration of space and the mind/body axis of the work, exemplified by the artist’s continued performative interactions with her work in her studio in front of a self-timed camera, further documented in diaristic conceptual writing. In the 1970s, Castoro had a strong focus on sculptural work. She created the ‘Free Standings Walls’, high screens composed of wood panels such as the half circle of “Break in the Middle” (1970), a structure alluring to performative interaction. The surfaces of the panels are treated with graphite, gesso and marble dust, thickly applied with a broom creating giant rough brush strokes, as if to mock the elegant economy of Abstract Expressionism. By the mid 1970s, Castoro expanded her sculptural experimentation with an intriguing group of small pieces of more organic abstraction that were composed of steel wire, gesso and marble dust. The steel wire boldly intrudes (or ‘grows’ out of) the fragile white panel type forms of these pieces; a ‘marriage’ of materials creating a drastic tension between a cryptically architectural and a physical, even sexual, form dimension.

In Paris, Gina Pane, -primarily known for her radical body actions of the 1970s, began her career with exceptional geometric color field paintings and minimalist sculptures, associated with her concept of the ‘Structures affirmées’. Her programmatic piece of transition is the installation Stripe, Rake (1969), on view in the first part of the exhibition.

Barbro Östlihn’s large-scale pattern paintings from the 1960s and 70s were abstractions from architectural detail and urban sites. After her move in 1961 with her husband Öyvind Fahlström from Sweden to New York, Barbro’s emblematic aesthetic and the artistic milieu associated her with the burgeoning Pop Art movement. However, her paintings were described as abstract and ‘precisionist’. Consequently Östlihn moved forward in the 1970s and 80s towards entirely abstracted compositions and a uniquely facetted monochromatic palette, a body of work that can be best termed as ‘Pop-abstraction’. On show in ULTRAPASSADO II is Östlihn’s 1963 painting “Moon”, composed of a bright circle framed by a black plane, a motif which shifts ultra-subtly between geometric abstraction and atmospheric figuration, while likely hinting to Pop Art’s obsession with space travel.

The reason for a lesser-stylized and genre-fixated practice in the work of these artists is historically and politically complex. It has its roots in biographical and individual stories, as in a meta-personal perspective. Female artists in the 50s, 60s and 70s were in a different position in terms of recognition and support. Their work was often not accepted in the center of the argument of the time. Geometric abstraction was, per se, associated as a male dominated practice or regarded as gender-neutral, and in political terms, non-representative language. Commitment by female artists to a newly established avant-garde discourse and language – however pioneering and radically formulated – was not a guarantee for acceptance, visibility and inclusion.

As a consequence, women artists of this period moved-on faster from certain detected limitations inherent in formalist constrain, or they incorporated and transformed abstraction into an expanded practice. In some cases, the lack of acceptance freed or pushed these artists forward to explore other forms.

Abstraction is, in most of these artists’ works, an agent of formal rigor and innovation as much as that of transition and spatial and social exploration. One could argue that some female artists took the beginning on and throughout an internally critical perspective on the avant-garde movements they were part of. If further argued, could it be that these artists were producing works of formal determination while referencing to the idea of formalist rigor from a creative distance in the very same artistic operation? And was this perspective providing and requiring a greater diversity and less comfort in a purely formalist containment in their choices of style and practice?

While the geometrical works of Lygia Pape, Rosemarie Castoro and Gina Pane show a period related commitment to a rationalist and controlled form of abstraction, one can see in the work of e.g. Lenora de Barros – as the next generation – a clear commentary on these forms, almost a playful bastardization of an earlier language. Daughter of first generation Concretist painter Geraldo de Barros, Lenora de Barros engaged with a Neo-Concretist poetry scene in Brazil since the 1970s. In her prototype chair pieces, Lenora de Barros creates an homage to the Russian Constructivist history, as much as to the Brazilian design collective UNILABOR, founded by Geraldo de Barros. In ULTRAPASSADO II, Lenora de Barros develops further her “ULTRAPASSADO Chair” prototype into installational variations in which the chairs become functionalist allegories for a dilemma: the compromised relation of past, present and future in contemporary art making, here expressed in communicative dynamics passively ‘performed’ by the chair, which are half-way barred and obstructed.

For ULTRAPASSADO II, Brazilian-Japanese Lydia Okumura realizes one of her early site-specific painting-installations, Different Dimensions of Reality II (1971-2014). Okumura can be seen as the next generation of Brazilian artists –after Pape and Clark – to embrace geometric abstraction, however her approach became formally more interventionist. She also engaged with collaborative work since the early 1970s. The Japanese immigrant history of her family in Brazil led to a heightened political consciousness in her practice. In 1974 Okumura moved to New York, where she still lives and works. Her work has been widely exhibited in Japan and Brazil, while she also realized imposing New York spaces (private and public) over the last 30 years.

Martha Araújo comes from the Northeast of Brazil. She began her career in the 1980s experimenting with textile garments that were used as key elements in performances and actions and were worn by dancers, actors, and the artist herself. The garments took the shape of geometrical forms -a black poncho expanding into the shape of a half circle, as in Habito Habitante (1982)- and other performance coats and suits with striped and linear patterns, which were enhanced by the movements of the dancers, creating the illusion of moving paintings in collective enactments with political underpinnings. In ULTRAPASSADO II, we present Araújo’s piece Quadrado Dobrável Espaço Real (Square Foldable Real Space) (1985), a square sheet of connected black and white cubes. On the white cubes, – when the sheet is still unfolded – the words Quadrado, Dobrável and Real are spelled out. The viewer can then fold the piece into a sculptural three-dimensional structure, and by doing so, add the componentof Espaço, – space.

Recently, abstraction has gained a new aesthetic currency in contemporary art while a serious discourse and commitment to what post-avant-garde formalism could imply seems at times underinvested.

The contribution of the artists in this show to the aesthetic milieu of geometric abstraction is immensely rich and documented in the enormously varying concerns and the radical diversified sensibilities of their formal experimentation. At the same time, one can see an internationalist concurrence of formalist process and experiment in different cultural-political geographies, creating exiting juxtapositions.

São Paulo based artist Paloma Bosquê materializes in her work a convincing proposition of how the legacy of abstraction can be translated into a meaningful and transcending contemporary practice, without losing rigor and by meeting the challenges of this perfectly relevant language of today in unexpected ways. Her work is highly informed by the formal and intellectual sensibilities in the work by women artists Lygia Pape, Lygia Clark, and Lenora de Barros, who Bosquê served as an assistant for some time. And yet, her work takes its own path by fusing former abstract formalist concerns with an unusual materiality that takes its inspiration in organic substances and surfaces as well as found and worn objects. The work seems to contain a certain alchemy and aura from a quite opposite spectrum than the smooth industrial materials used, for example, by the Concretists. Bosquê introduces another sensibility and concern in her art: the one of the body and of surreal and transgressive physicality, which has been intensely formulated by women artists, in particular in the pioneering work of Eva Hesse. In one of her most recent pieces on show, Skin (2014), Bosquê sewed rectangular pieces of cotton paper together to a sheet of irregular geometric pattern. The surface is covered with gold leaves, which are in some parts oxidized. For ULTRAPASSADO II, Bosquê realizes a new site-specific installation composed of iron squares connected through ultra-filigree strings of pine rosin in a minimalist structure that delicately balances the weight and ‘brutalist’ features of the industrial iron with the golden porous and fleeting nature of the resin.