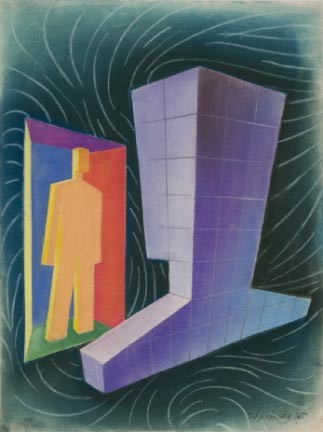 As a wartime compliment to the Bauhaus 1919-1933: Workshops for Modernity at the Museum of Modern Art, Kandinsky at the Guggenheim Museum, and László Moholy-Nagy at Schirn Kunsthalle in Frankfurt Broadway 1602 offers Xanti Schawinsky: Beyond the Bauhaus, Faces of War.

This is an exhibition of drawings, photographs, and mixed media works created by the artist in New York, in the 1940's, once he had escaped his own firsthand encounters with Fascism in Germany and Italy. These works are alternate re-constructions of human identity and the human psyche shattered by the experience of violent political and racial conflict during the Second World War.

Born in 1904, in Switzerland, to Polish-Jewish parents, Alexander "Xanti" Schawinsky studied painting with Wassily Kandinsky and Paul Klee, theater arts with Oskar Schlemmer, color with Josef Albers, and photography and design with László Moholy-Nagy at the Bauhaus in Weimar and Dessau.

To help Schawinsky obtain an exit visa and safe passage from Europe, Josef Albers later recruited him to teach drawing, color theory and theater arts at Black Mountain College. The artist then collaborated on pavilion designs for the 1939 World's Fair with his colleagues Walter Gropius, Marcel Breuer and Herbert Bayer. Schawinsky spent the balance of the war years in New York working for the Army Air Corps analyzing anti-aircraft guns and designing artillery manuals while creating the works of art in this exhibition.

From the 1950's until his death in 1979, Schawinsky divided his time between Europe and New York. A prolific talent, he taught at Brooklyn College, City University of New York and NYU while producing many series of innovative paintings, drawings, and photographs as well as executing graphic design commissions for Cinzano, Illy Café and Olivetti and numerous theatre design projects, notable among them, the sets and costumes for Prokofiev's The Flower of Stone for the Stadttheater Basel.

This exhibition is being curated by Anke Kempkes / BROADWAY 1602, and Larry List, New York-based independent curator and writer.
www.broadway1602.com