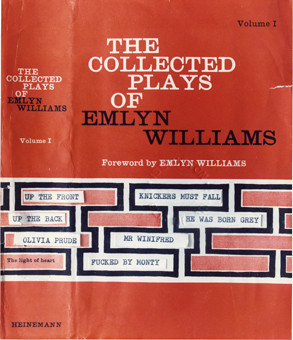 Ancient & Modern presents an exhibition of sculpture by artist Adam Gillam, alongside a selection of library book covers ‘defaced’ by playwright joe orton and his partner Kenneth Halliwell during the early 1960s.
Bored by the book selection at their local Essex Road library (1) Orton and Halliwell would smuggle out books’ dust jackets and alter the covers and inside flaps with images from other sources, or would add new text and narrative.
Returning the books, they would wait to see the responses of those who pulled them off the shelves to borrow (2).
The chosen books targeted a largely genteel upper middleclass, representative for Orton and Halliwell of those who defended a rigid and conservative morality. They were imprisoned for six months for their crimes of “five counts of malicious damage” against the Islington Council and Library (3)
Along with the book covers, 1,653 plates from art history books had also been purloined, with which they had covered the walls of their one-room Islington apartment in an elaborate collage. The altered covers are intriguing in their subtle yet jarring use of collage elements. it is this sense of humour, mischief and play to which Adam Gillam responds, making an installation of objects whose interest, like Orton’s and Halliwell’s ‘interventions’, lie in impulse and process - a tentative yet deliberate exploration of forms and surfaces and what lies beneath.

1) “Libraries might as well not exist; they’ve got endless shelves for rubbish and hardly any space for good books” (1967). orton, joe. The Orton diaries, ed. john Lahr. London: Minerva, 1989.
2) “I used to stand in the corners after I’d smuggled the doctored books back into the library and then watch people read them. it was very fun, very interesting” ibid.
3) Orton speculated that the court had handed out unduly harsh sentences for their ‘crime’ to punish them for their lifestyles, “because we were queers” (1967).
Joe Orton (born Leicester 1933, killed by Halliwell in August 1967) left school at 16 and went to RADA two years later. From 1964 ~ 1967 he produced works for radio, theatre and television, the most successful amongst them ‘The Ruffian on the Stair’, ‘Entertaining Mister Sloan’, ‘Loot’ and ‘The Erpingham Camp’. Orton also wrote a screenplay for The Beatles, ‘Up Against it’, which was never filmed as it remained under negotiation at the time of his death.
Kenneth Halliwell (born 1926, died of a drugs overdose in August 1967) met Orton at RADA. They were inseparable, although their relationship was always tempestuous. Halliwell was an important mentor to orton and the two co-wrote a number of plays (all unpublished) and novels, two of which were published posthumously, ‘Lord Cucumber’ and ‘The Boy hairdresser’.
Adam Gillam (born 1970 East Farleigh, Kent) studied at Liverpool john Moores University and the Royal Academy Schools in London. He has exhibited in the Brussels Biennial 1, curated by Nicolaus Schafhausen and Florian Waldvogel (2008 ~ 2009), in group shows at the Royal British Society of Sculptors, London (2010) and ABTArt gallery, Stuttgart (2009), kLERkX, Milan (solo, 2008) and with Sara Mackillop at MoT international, London (2008), and was included in ‘The Way We Work now’ at Camden Arts Centre (2005). Currently on display at Leeds City Art gallery until July 2011 is ‘Construction and its Shadow’, curated
by Andrew Bick.
www.brucehaines.com