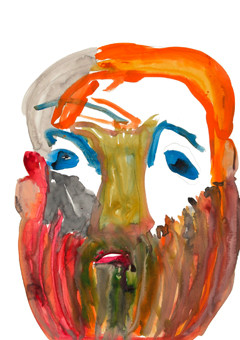 Ancient and Modern presents a series of watercolour paintings by Daniel Silver. The Monks are each loosely based upon a found photograph of an Armenian Monk taken in Jerusalem during the 1970s at a time between wars.
Armenian settlement of Jerusalem began in 70AD after the destruction of the city by the Romans. After the Edict of Milan in 313AD, which permitted Christian worship across the Roman Empire, members of the Armenian Apostolic Church began to permanently settle in Jerusalem, excavating and venerating sacred sites. Today there are approximately 3,000 Armenian Christians living within their own quarter of the Old City alongside distinct areas populated by Jewish, Muslim, and other Christian denominations beneath Temple Mount. The Armenian community has traditionally maintained a passive neutrality through hundreds of years of conflict. The monk painted by Silver offers a less politically charged icon of the deeply divided city – a face he variously presents, across the series, as serene, sage-like, stern and psychotic.

Silver’s interest in portraiture has previously been manifested in a large series of busts carved from soap and spring-stone derived from mug shots of those awaiting execution in American gaols. The influence of artists from across the 20th century is brought to bear on his work, from the sculpture and drawings of Henri Gaudier-Brzeska to those of Louise Bourgeois.