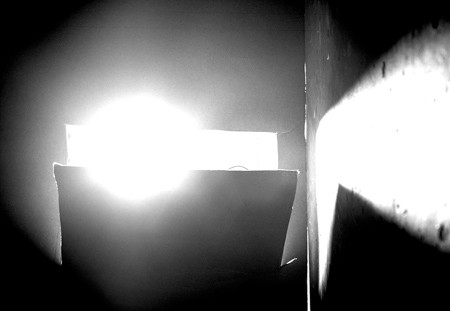 These artists, spanning three generations, all display an interest or investment in the notion of ‘image-making as performance’ as an active and deliberate practice in both surreptitious and overt ways.

Miroslav Tichy (1926-2011) is often heralded as an ‘outsider photographer.’ After studying to be a painter, Tichy retreated back to his home town of Kyov (Czech Republic to live the rest of his life in relative isolation. Here he began to take photographs with home-made cameras constructed from recycled bottles and cardboard boxes. Much of Tichy’s subject matter consists of women photographed subversively, without their consent or knowledge.

The photographs of Raphael Danke (b.1972, lives Berlin) share a sense of this poetry of the accidental and unexpected as captured through ‘unconventional’ photographic means. Danke sources pages from women’s fashion magazines and photographs them with his mobile phone, illuminated by a light source from behind. The images on either side of the page blur and overlap, forming a composite of two often disparate sources that, in the.pages of the magazine, have been laid cheek-to-cheek, and together generate a sort of sensual and intriguing mystery of forms and aesthetics.

As with Tichy and Danke, the work of Ketuta Alexi- Meskhishvili (b.1979 Georgia, lives Berlin) engages with a sense of deliberateness, of an awareness in how an image is constructed: both in what it depicts and the process by which has been created. Meskhishvili uses assembled, collages or found objects, lighting and perspective to generate images that manage to appear both straightforward and esoteric.

Taking a photograph is often a sort of performance, particularly when the subject in question is the photographer themselves. While covering three generations, the works of Claude Cahun (1920-1954), Rudolf Polanszky (b.1951), and Andrew Mania (b.1974) can be seen to participate in this trope. Cahun, with her lifetime partner Marcel Moore, created a large body of photographic works, mostly taken in the Jersey islands. For much of this time, the two were interned in low security prison camps or confined to their domestic situations, due to the WWii german occupation of the islands. As such, they had only themselves and their immediate surroundings as subject matter. What emerges however is a rich and creative self- generated landscape that seems to exist alongside, or even independently of the everyday: one that mines the idiosyncrasies of individual perspective or fantastical internal narratives, expressed through the assemblage of objects and costumes, tableaus and alternative personas.

Some sixty years later, Rudolf Polanszky’s photographs document performances of a different variety, ones carried out in his vienna studio during the mid-1980s. The artist often created different rules or strictures by which he was confined to a space over a period of time and forced to carry out actions, from singing in different tones while making faces, to drinking alcohol until he could do so no longer. in each case, the intent was to in some way decipher, through closer and extended examination, the more primal or essential elements of the underbelly of human behaviour. Here, the photographs form a separate incarnation of the performance, representing frozen moments of the different experiments, only traces of which remain.

Andrew Mania is best known as a painter and draftsman, but has been collecting photography for a number of years. in a new series of works, images appear to document actions and poses created in the context of architectural ruins, formally recalling the exposures of an oeuvre introduced through the photography of Francesca Woodman, then often taken back into the drawing practice with which Mania is most familiar.

Luke Gottelier (b.1969) makes photographs and paintings and here revisits a floor-based installation of 2001, the montage of over six-hundred individual copies of the same image acts as the plinth upon which ‘Evening’s Tears, Morning’s Dew’ settles.
www.brucehaines.com