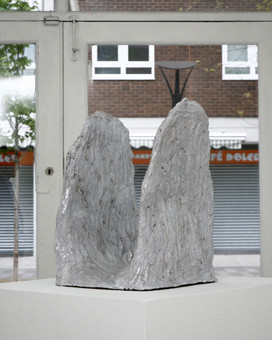 ANCIENT & MODERN presents V, an exhibition of a new sculpture by the Londonbased artist Michael Dean with a work by the New York-based Lancashire artist Andrew Lord.
Michael Dean’s work deals with the relationship between language and visual form, and V comprises a solitary sculpture cast in concrete, presented alongside a text in the form of a discussion of ‘voices.’ The voice, which could be one or many, meditates on the form of the ‘V’ as both letter and implied form: angles, slopes, valleys, hands laid over one another, arriving and converging, alighting, touching, resting, passing, departing. A single page in two parts, the text is repeated and bound in a volume, from which pages can be torn away and taken from the installation - the voices carried out into the world by those who hold them.
Dean’s practice ask questions about how and what language can mean to objects. What is it to title or describe something, to name it silently or aloud, to trace its form with nomenclature, narrative, or dialogue? And how, in turn, do the contours of a material work reflect linguistic structures, their attendant visual forms and implications? Text and object circle and side-step, generating a series of forms and surfaces that slide to and away from each other in endless metonymy.
Dean invited Andrew Lord to display a work in yet another side-step or association to investigate the notion of trace and resonance, memory and form. Much of Lord’s work connects language and object, for instance using his own body to cast a series of sculptures titled biting, breathing, listening, smelling, swallowing, tasting and watching. Other sculptures have explored stanzas of Walt Whitman and Frank O’Hara poems. For V, Lord shows ‘Small Valley (Doctor’s Wood) Whitworth (II)’ (2009), a sculpture from a series based on memories of his childhood experience in Whitworth in Lancashire.. Presented together, the works of Dean and Lord interweave and prompt a contemplation of form and representation, abstract and concrete, real and imagined, familiar and remembered.