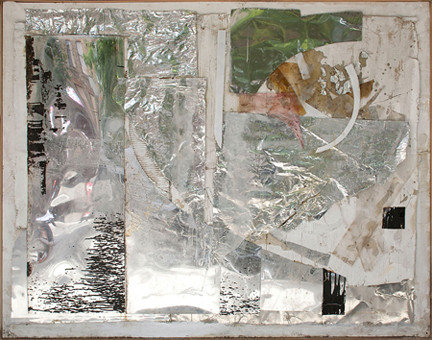 ANCIENT & MODERN presents sculpture, collage reliefs and video by Vienna-based artist Rudolf Polanszky in his first solo exhibition in Britain.
In the late 1970s, Polanszky made a series of artworks using pigs’ fat, entitled ‘Schweinsfettzeichnungen’ (1976) in an attempt to incorporate something that once was alive into his art. During the 1980s, he developed an extensive and ongoing sculpture practice alongside film and video works, the latter often recording pseudo-scientific experiments or action painting.
Rudolf Polanszky emerges from a generation of post 1960s artists that includes Dieter Roth, Valie Export and Franz West. Polanszky’s sculptures contain the raw scraps of industrial materiality - iron, wood, plastic - bound in visually delicate but robustly balanced ‘plinths’, which carry aloft plexiglass sections in part describing a circle, or horizontal sections the length of a rectangle and reminiscent of strata below the surface of the earth. The sculptures, like vessels, are sometimes filled with smaller versions of themselves, or else more fluid and visceral substances such as feathers, pigment, foam and fibreglass, ranging in form from the maquette to the monumental.
The exhibition presents two examples of Polanszky’s ‘Hypertransform Sculptures’ (2002–2005); smaller scale works ‘Tube Sculpture’ (2008) and Transaggregate, Blue’ (2010) and a large painting from his ‘Reconstruction Series’. Five films drawn the last thirty years are screened including his drinking performance ‘Semiology of Senses’ (1976) along with ‘Musical Ape’ (1980) and ‘Piece for Animals’ (2002).
The first in a series of ‘Pamphlets’ to be produced by Ancient & Modern will be published during the course of the exhibition.

Biography
Rudolf Polanszky (born 1952) is an artist based in Vienna. He was recently included in ‘Living and Working in Vienna’, Kunsthalle Vienna (2010) and ‘Hamsterwheel’ instigated by Franz West at Venice Biennial (2007), and which subsequently showed in Festival de Printemps de Septembre, Toulouse (2007); Centre d’Art Santa Monica, Barcelona and Malmo, Sweden (2008). He was included in ‘Daisy Chain’, MOT International, London (2006) with Richard Forster, Rachel Harrison and Franz West, curated by Bruce Haines. Rudolf Polanszky’s films, transferred to video, have been screened at institutions in Europe and North America. In November this year, Ancient & Modern will present his sculpture at Artissima, Turin.