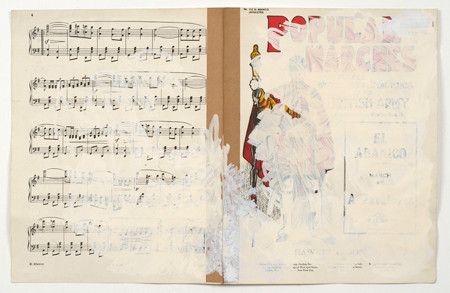 Ancient & Modern presents Ruth Ewan’s ‘A Jukebox of People Trying to Change the World’, an on-going collection of over 800 idealistic or political songs collated by Ewan and disseminated via a CD jukebox.
The work compiles a wide array of material from different cultures and eras including songs by the Angolan UPA fighters, Attila the Stockbroker, Zelia Barbosa, Black Sabbath, Crosby, Stills & Nash, The Glasgow Song Guild, Billie Holiday, Fela Kuti, Oi Polloi, Malvina Reynolds, Paul Robeson, Sweatshop Union and the Tibetan Singing Nuns amongst many others.
Ruth Ewan’s work is concerned with the way in which radical ideas circulate, to be either popularised and absorbed into everyday life, mythologised or forgotten. Several recent exhibitions and projects have focused on the role of music in these processes.
She is currently presenting ‘Squeezebox Jukebox’, 2009, in ‘Altermodern: Tate Triennial 2009’ at Tate Britain. This work sees daily performances of songs featured in ‘A Jukebox of People Trying to Change the World’ on the largest known working accordion (253 x 190 x 85 cm) built by Giancarlo Francenella in 2001. Although exquisitely crafted this awkward object requires two musicians to operate it. Performed works range from ‘The Cutty Wren’ from 1393 (an English song often attributed to the Peasant's Revolt of 1381), ‘The World Turned Upside Down (Diggers' Song)’, c.1714, by Gerrard Winstanley and Robert Burns’ ‘Is There for Honest Poverty (A Man’s a Man For A’ That)’, 1785, to more recent material such as ‘Clandestino’, 2000, by Manu Chao and ‘Rich Man’s War’, 2005, by Steve Earle. Although the music invites re-engagement with its social message the necessarily clumsy recitals expose the difficulty in reasserting historic idealism today.
‘Fang Sang’ 2008, produced during her Cocheme Fellowship at Byam Shaw School of Art and presented at the ICA, London, reunited a street musician with a song distantly remembered from his childhood. ‘Six Feet of Earth’, a traditional song, popular in the late nineteenth century, extols death for levelling the difference between rich and poor. A new recording of the song by Fang was freely distributed from the ICA.
‘Did You Kiss the Foot that Kicked You’, 2007, commissioned by Artangel and the Jerwood Charitable Foundation saw a Ewan McColl song, ‘The Ballad of Accounting’, 1964, performed by over one hundred street musicians within their usual repertoire, across the city of London, for one week in October of that year. The lyrics of the song demand the listener to reflect upon their subservient life.
Ruth Ewan graduated from Edinburgh College of Art in 2002. Her work will be presented at the forthcoming New Museum, New York, triennial exhibition. She has previously held solo exhibitions at the Northern Gallery for Contemporary Art, Sunderland (2007) and at Studio Voltaire, London (2006) and The Embassy, Edinburgh (2005). Ewan was the winner of the EAST International prize in 2006.
www.brucehaines.com