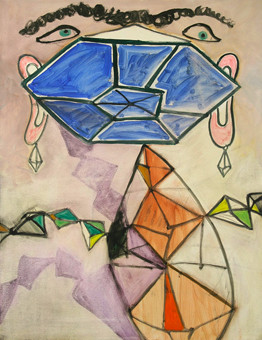 Taking its title from Leonard Cohen’s third album released in 1971, ‘Songs of Love & Hate’ brings together drawings, paintings and sculpture by five British based artists. Together, the collected works are at once figurative and abstract, exuberant and despondent, drawn and dripped, earnest and profane. LUKE GOTTELIER (b.1968) studied at Maidstone, Exeter, Hull and Norwich Schools of Art. He has held solo exhibitions at Kate MacGarry (2007 and 2003), Outpost Gallery, Norwich (2007), One in the Other, London and the British Council in Prague (2001). Group exhibitions include the NatWest Painting Prize (1999) and ‘Surfacing’ at the ICA, London (1998). ROGER HILTON (b.1911, d.1975) studied at the Slade School of Art and the Bissiere School in Paris. He moved to Botallack in West Cornwall in 1965 and his pioneering, abstract, post-war painting is often identified with the St Ives group. A major retrospective of his work was held at Tate St Ives in 2006 and a further retrospective will take place at Kettle’s Yard, Cambridge later this year. ANSEL KRUT (b.1959) studied at the University of the Witwatersrand, Citй Internationale des Arts, Paris and at the Royal College of Art. Solo exhibitions of his work since 2000 have been held at at Domobaal, London (2006 & 2004). He has also shown his work in group exhibitions at the Temple Bar Gallery, Dublin, the Herbert Read Gallery, Canterbury and the John Moores Painting Prize in Liverpool (2006) and in the Jerwood Drawing Prize London (2001 – 2004). CEDAR LEWISOHN (b.1977) studied at Camberwell School of Art. He is an artist, writer and curator based in London. As the Inspire Fellow at Tate Modern he recently curated ‘Street Art.’ He has recently held solo exhibitions at Institue Andrew Gilbert, Berlin (2008) and at Five Years, London (2007). AUDREY REYNOLDS (b.1969) studied at Bath College of Art and Chelsea College of Art, London. She has held solo exhibitions at Parlour, London (2006) and 1,000,000 mph, London (2004). She has also participated in group exhibitions at Hats Plus, London (2007), Netwerk / Center for Contemporary Art, Aalst (2006) and in the 60th Anniversary Show, at Gimpel Fils, London (2006)
www.brucehaines.com