The sun is the tongue, the shadow is the language 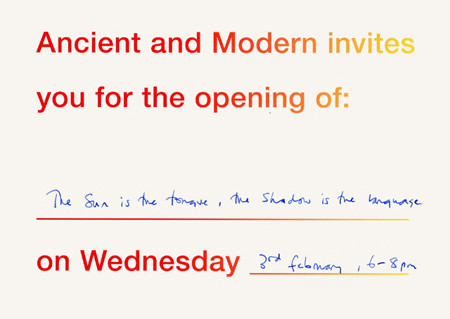 THE SUN IS THE TONGUE, THE SHADOW IS THE LANGUAGE

ANCIENT & MODERN presents an exhibition of artists’ collage, hand-coloured photographs, photograms and ‘sun pictures’ alongside science photography that capture experiments in which effects or phenomena are usually imperceptible. In the US, Carl David Anderson (1905-1991) photographed proton and electron tracks in a ‘cloud chamber’ for research into the existence of the positron, for which he was awarded the Nobel Prize for Physics (1936). Meanwhile in Austria, Marietta Blau (1894-1970) made discoveries about how ‘disintegration stars’ form in photographic emulsion, travelling to the highest observatory in Europe, the Jungfraujoch in Switzerland, to her expose her photographic plates to cosmic radiation.

‘The Sun is the Tongue, the Shadow is the Language’, titled after Michael Maier (1568-1662), a German medical practicioner who devoted his life to researching alchemy and the secrets of nature, playfully examines momentary traces of forces that exist as universal laws, while connecting elements of art and the everyday with the infinite nature of the cosmos.

Ernst Caramelle (b. 1952 Tyrol, lives Frankfurt) exhibits ‘sun pictures’, created through bleaching paper in the windows of his studio in a process that takes several years to resolve.

Lourdes Castro (b.1930 Madeira, Portugal) is a artists little-known in Britain, whose assemblages and Perspex-pictures have the shadow and silhouette at their heart. During the 1970s she embarked on a series of botanical photograms akin to the 19th-century cyanotypes of English botanist Anna Atkins. Castro has a retrospective exhibition at the Serralves Museum, Porto in March.

Raphael Hefti (b.1979 Switzerland, lives London) uses photography as part of his wider curiosity about the history of materials, moments and sites of scientific discovery, here showing found photography from industrial archives.

Luca Frei (b. 1976 Switzerland, lives Malmo, Sweden), unearthed the quote lent to the exhibition, and makes installations and paintings that ruminate on time and transformation, here exhibiting subtle gouaches fixed in space by the addition of collage like hands on the face of a clock.

Li Yuan-chia (1929-1994) lived in Cumbria by way of China, Taiwan, Italy and London, where he exhibited at Signals (1963) and Lisson (1965). He imbued philosophy and poetry into his reliefs, paintings and experimental photography, wanting “to go beyond photography’s literal materiality and discover its relationship to the constant processes of transformation in the universe.”