From “THE HOUSE THAT went to TOWN” 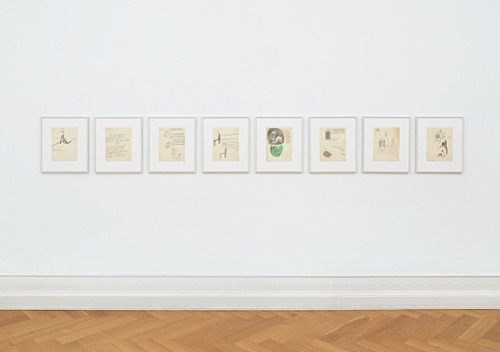 In the early 1950s, Andy Warhol collaborated with the young author Ralph Thomas (Corkie) Ward on a small number of illustrated and self-published books. Their first joint publication was “A Is an Alphabet” from 1953, a collection of 26 loose pages that combine a silhouette by Warhol with a verse by Corkie. Each of Corkie’s texts describe an encounter between an animal, whose name begins with the letter of the alphabet to which it is assigned, and a human figure (or pair of figures) drawn by Warhol on the top half of the sheet.

Warhol executed his drawings in the blotted line technique, which had become his first signature style and with which he made a name for himself as an illustrator within the New York publishing world.

“The blotting method probably gave Warhol the idea of having books printed from his drawings. In theory, this presented no difficulty, since there was no longer any real conceptual difference between the original and the reproduction: the style of the blotted line was determined not by individual whim but by mechanical accident. Warhol’s friends applied the color in most of the books; the drawings Warhol colored himself cannot be distinguished from those done by his assistants: all were done quickly, with little regard for borders or boundaries.”(1)

The emphasis on reproduction inherent to the blotted line technique continues in the figures within the drawings. Isolated individually or in pairs, it seems of little importance whether they are depicted here for the first time or originate instead from earlier works. Some of the figures had already appeared in other contexts or would soon: in the book jackets Warhol designed for New Directions, his illustrations for Glamour or Park East, or his LP covers for Columbia and Caedmon Records. Detached from their pictorial frameworks, and presented in the publication of an alphabet, the figures in “A Is an Alphabet” can be considered as prototypes. With each figure or pair assigned to a letter, they are components of a visual vocabulary.
In a series of large-format drawings, dating from c. 1953 and shown for the first time in this exhibition, Warhol combines the figures from “A Is an Alphabet” but abstains from giving them a figurative pictorial context, instead distributing them loosely across the paper to create formal compositions. At times, he does so in a way that could suggest combinations of letters, for example when he decides to place the figures side-by-side like a string of text.

Warhol and Corkie also worked together on an earlier, unpublished book project, “THE HOUSE THAT went to TOWN,” in 1952/53. The original manuscript of 40 light-blue pages is housed at the Andy Warhol Museum in Pittsburgh. Here, we present a selection of draft designs for individual pages.

“As the only book he designed that features a complete, continuous plot and was conceived for double-page spreads, ‘The House That Went to Town’ occupies a special place in Warhol’s oeuvre. This unpublished manuscript tells the story of a personified house whose parts break free and move into the city. It begins with the headboard and footboard, which grow bored and separate from the bed, which is sleeping all the time, and leave it behind on the floor. But they wake the dozing chair, which then out of curiosity follows its furniture companions into the city. They do not get far, however: the picture hanging on the wall wants to come along, and it threatens the chair that it will wake the bed if the chair does not do what it asks. With a furrowed brow, the chair takes the picture down and takes it along. No sooner have they passed the snoring door than the hinges wake up and demand of the door that they be allowed to come along. When the door wants to keep resting, the hinges too threaten to wake the bed, so that the door has no choice but to go into the city with the hinges. The wall, which is already falling to pieces, and the doormat pretend to be sleeping the whole time. It too goes into the city, to search for a plasterer. Initially, the roof thinks it will collapse without the wall, and so it decides to follow the others. When they arrive in the city, they make so much joyful noise that it awakens the slumbering oak floor, which lets out such a scream that the bed is aroused. The bed then leaps up, looks around, and lets out a shout that can be heard in the city. The carousing parts of the house, shaken out of their festive glee, stop their clowning. With heads hanging, they all come back and go to bed. The book ends almost as it began: with an image of the sleeping bed.”(2)

Andy Warhol’s Sunsets were produced in 1972 as a commission by the architects Philip Johnson and John Burgee. Each of these unique silk-screen prints, executed in a different color combination, was supposed to be hung in a room or suite of the Hotel Marquette, which they built in Minneapolis around the same time. This idea brings to mind Warhol’s 1966 film “Chelsea Girls,” whose individual sequences contrast scenes from the various rooms of New York’s Chelsea Hotel, suggesting a simultaneity between the disparate events unfolding in the different rooms.