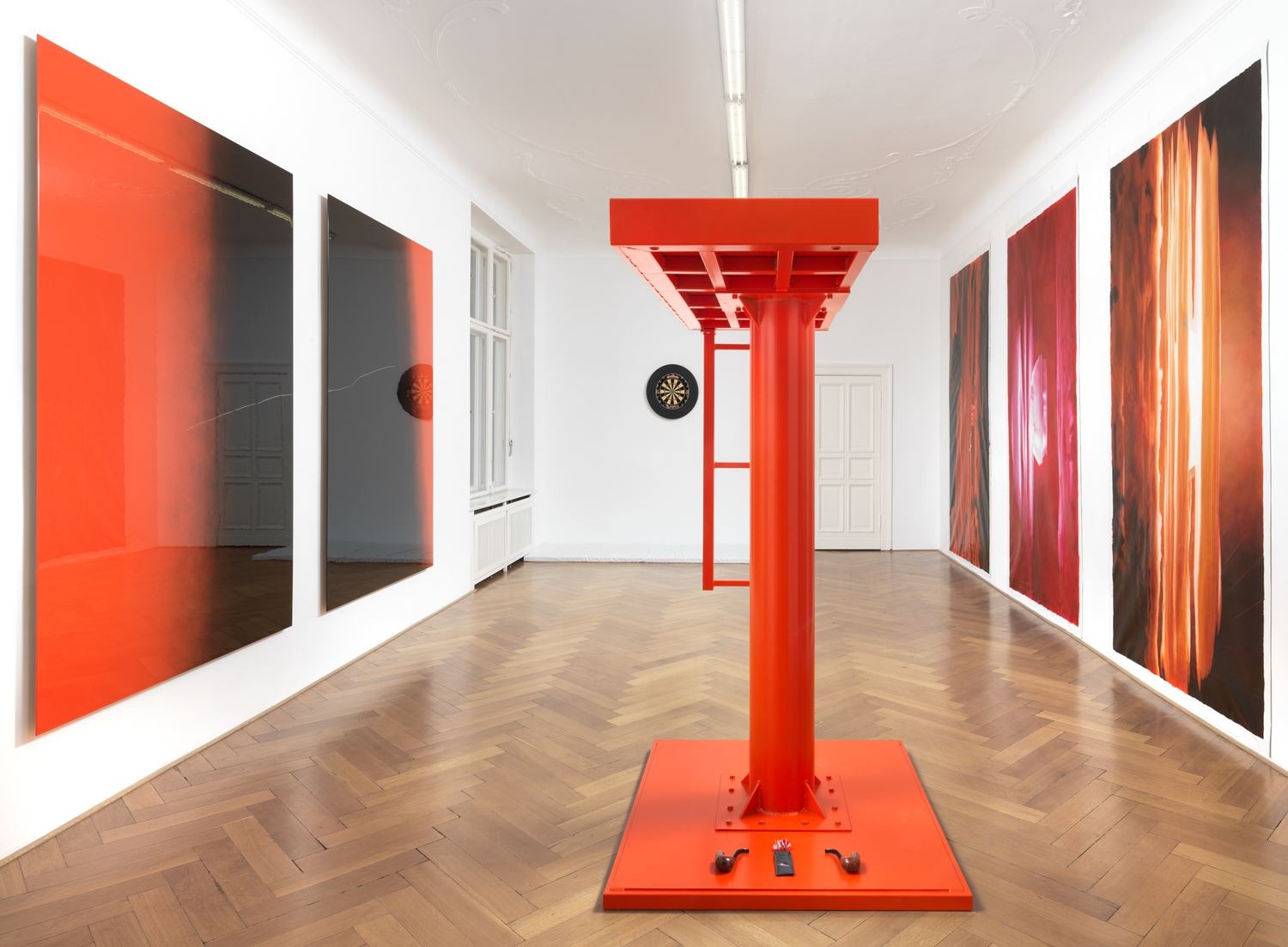 Imhof’s art is not a critique. It does not stage metaphorical repetitions of societal violence as a means of maintaining an aesthetic distance. Imhof does not protect herself. She and her collaborators do not appear as observant performers acting within the effects of pre-existing power structures. She works with them. They work through them. It is in elements of the undeniable violence of ourselves and our states that Imhof finds her artistic forms. In overloading them, she opens up a formal diversity that is both limitless and unstoppable; series of fetishes that operate between desire and dominance. Excesses are tested out here as forms of desire; as compulsion, as addiction, as sex. For all of the grandiosity of Imhof’s scenes, she never stages presupposed abstractions; they are not metaphors of capitalist fetishism but allegories of a process of demodernization. Walter Benjamin’s allegorical slogan can be applied here: “Method is digression.” “Imagine” is full of built-up heat, bottlenecks, and feverish abstraction. The performers move within the radius of a sunken horizon. The security personnel guard neither the interior nor the exterior, but the threshold in which everything is submerged.

Within the gallery rooms, Imhof sinks the horizon of an unbearable everydayness – through us, its bearers. She collapses the horizon, spreads it across paintings, repeats it as a Newscast Label, forces it into a vertical position in the form of test images of catastrophes, elevates it on high seats for her performers, serves it to us on trays. The horizon dominates a pictorial space whose surfaces are painted but also sprayed, printed, scratched. They are drawings that do not give an aesthetic framework to the painter’s body itself, but to the heights from which it falls: neither an expression nor an impression, but an act of self-administration on the part of the artist. The fetishes in this room do not encircle any presupposed self-fetish. Imhof immerses herself. The lack of action on the part of the performers also and above all marks their difference to metaphors of endless modern reproductive contexts and their reproducibilities (as so often attacked today). The figurative elements present in each of Imhof’s drawings, however abstract these may be, do not represent a further and final modernist twitch or the melancholy of an interminable loss, and are not meant as sick jokes about a form of figuration that forces living bodies to participate in it. The works’ figuration exists at their flashpoints. Sex as form. A desire that is not triggered by the juxtaposition of retrievable attributes of bourgeois desirability, focused on the bodies of the reproductive order, but which peaks and breaks, as a collection of fetish forms lost in their own reproduction, whose horizon opens no perspectives but instead closes them, without ending and without leading to an end, a horizon that holds within it a build-up of heat.

It is the task of interpreting fetishes, rather than fetishism, with which Imhof burdens herself, her collaborators, and us as her recipients. Readymades become threatening gestures, and Red Bull, cola, needles, bongs, and helmets are transformed from exchangeable attributes of a socially generalized body of goods to fetishes of a revised origin. “Imagine” operates within a residually modern society whose brutalisms seem today to be in so many ways more systemic than the ideals its defenders cling to with all their strength. With all their strength directed against those who cannot live in that society. And who were never able to live in it. Imhof’s unideal art is not defeatist, but an engagement, one that is home to both her brutalisms and our own. From the privilege of critical distance, as shared by the modern artist and their audience, Imhof creates an aesthetic of pull, a chain of fetishes for an origin that is embedded in a sunken horizon. “Imagine” offers no reassurance. Imhof’s gestures, her symbols, and the signs that individuate the performers in her stagings are in fact all readable, trivial, kitsch. But the intimacy that arises from the artist’s detached lack of distance is not demonstrative; rather, it is endlessly melodramatic.