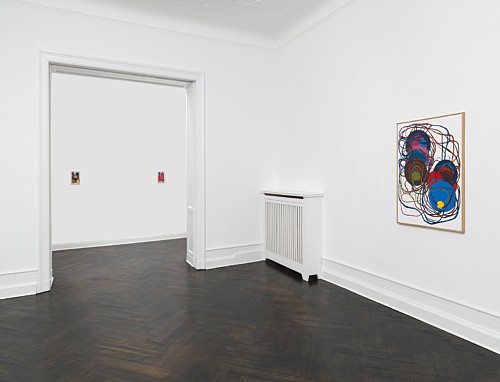 After studying art in Tokyo and Osaka (in the department Western painting) in the early 1950s, Atsuko Tanaka (1932 – 2005) joined Gutai, the Japanese avant-garde artists group, in 1955. She gained recognition for her participation in the legendary performances and actions of Gutai, especially for her artwork Electric Dress (1956).

Along with the artist Akira Kanayama, Tanaka left the Gutai group in 1965. Tanaka and Kanayama moved to Asuka in the Nara Prefecture in 1972 and lived together.
After leaving the Gutai group, Tanaka focused exclusively on painting and drawing, a practice she had begun in the late 1950s.

The exhibition at Galerie Buchholz Berlin is the first solo exhibition of the artist’s work in Germany, and includes paintings and drawings from the late 1960s until 2000.

“[...] It was as early as 1957 when Tanaka began working vinyl paint for her first circle and line paintings [...]. Her reason was that it allowed her to produce a much more uniform and smooth color surface and flow of line without the disturbances resulting from oil paints, and this accorded with the mode of expression Tanaka sought. In this way the circles and lines, without undermining the stability of the canvas, manifested the expanse of the surface like something stuck to a skin and invoked the viewer’s tactile sense by their lively emphasis of the surface above all, congested and intertwined as they were. This trend towards an intense sensitivity to surface is surely another development from her involvement with the body’s visible surface which came to fruition in Electric Clothes. The lines running in all directions entangled with the circles then seem to act as a visualization and embodiment of transformation/transition – the major theme in her work up to Electric Clothes – on a two dimensional plane such as painting. The lines drawn by Tanaka follow almost no rule, taking too complex a route to connect circles. lf we find a number of lines that connect the same two circles we cannot see any lines that are repeated; rather all the lines display difference of form and are forever swerving. [...] Line here takes on the meaning of a ‘boundary’ that encompasses the chaos of the world, and whenever a line is drawn, the composition is renewed and new structural relationships result. We may interpret this to mean that in painting, as in her series of cloth works, Tanaka explored a critique of the issue of boundary. As with the cutting and piling of the cloth, surfaces are differentiated, which suggest transformation and transition through the ‘swerving’ painted lines which were defined as they were figured out in a process that implies the latent force to proceed to a new structure. The actual diversity of these lines results in the increased complexity of transformation/transition, just as did the alternation of light – on/off – with the various round and tubular electric light bulbs in Electric Clothes and accelerated the ongoing generation of new relationships. [...] Similar to the way in which Electric Clothes raises the issue of the creation of self-identity in an ongoing process of relations with the world through transformation/transition of the visual surface ‘clothes = body’, the painting process of drawing lines or seeking out boundaries and confirming them relates to the same issue – the creation of ‘myself’.

As I commented before, it becomes clear from her creative process that her fascination lies not in presenting an original artistic formal or spatial representation, but in the operation of discovering boundaries. [...] Before attaching the canvas on a wood stretcher Tanaka always placed it on the floor even if it was not large, and painted from a point within the canvas [...]. She could avoid unwanted paint runs in this position and experience a much more powerful physical connection with the canvas than by mounting the work on an easel or the wall. Additionally, the vinyl paint has a far more fluid character than oil paint and has little resistance to the artist’s hand gestures, who maintains steady control in managing the flow without artifice and further reinforces the continuity between body and artwork. One could say that, from her viewpoint, painting is nothing but the painting of her own physical surface as it connects with her through the medium of paint [...].

[...] Atsuko Tanaka’s work is out of step with Gutai art which is primarily recognized for the importance of materiality and action. Naturally, materials are of significance in Tanaka’s pieces to the extent that they are fundamental to the realization of an image [...]. However, in the end the materials themselves are absorbed within the creation of imagery and do not affirm their existence as material. There is no question that physicality plays a major role in Tanaka’s art, yet rather than being elucidated directly by spontaneous and dramatic gestures, the relation to the body emerges symbolically from the animated surface with its appeal to the sense of touch and the visible surface of the body. Her work is in this sense distinct from the action painting of Gutai. Tanaka is concerned not with a body in motion but rather its everyday appearance and character. [...]”