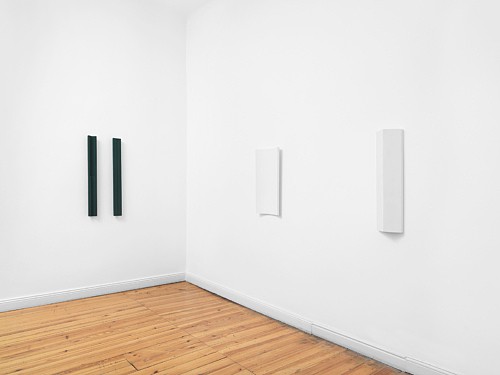 A roof is laid with rectangular tiles, flat with raised ridges along its two long edges. On the roof, the lateral ridges of two adjoining tiles abut. To make the structure waterproof, an oblong semi-cylindrical tile is laid over the joint. The result is a pattern that, when seen from certain angles, is a familiar sight: planes and objects resting side by side and atop one another—a rhythm of staggered grooves facing toward and away from the beholder. It is this image (this formation) that underlies the new works. In reality, the tiles (the modules) exist in many variations and sizes; they can be minimally or distinctly curved, rectangular or trapezoidal, and made from a wide range of materials, charging them with abundant functional, historical, and cultural implications. That is why there is no explicit model, only the idea of different modules.

The objects in the exhibition are plaster casts. They are quite simply affective renderings and defamiliarized representations of the tiles. The individual module is self-similar; its existence is grounded in the indifference of specimen and series. Its form derives from each subsequent similar or identical object. The modules come in diverse shapes, with variants sometimes differing from each other only in minute details. Some of the modules exhibited are arranged in vertical or horizontal series; in a few instances, several adjoining modules are cast in one piece. Most objects are coated with gouache paint in a dark blue-tinged green. (In Jan van Eyck’s portrait of Cardinal Niccolò Albergati, a bluish green mediates the transition from the figure to the depth of the pictorial space. There is a wonderful composition on paper by Nikolai Suetin that consists of black and green rectangles.) In the monochrome reliefs, the shadows they cast on themselves produce an impression of black. Some of the plaster objects are unpainted.