lonely and abandoned on the market place 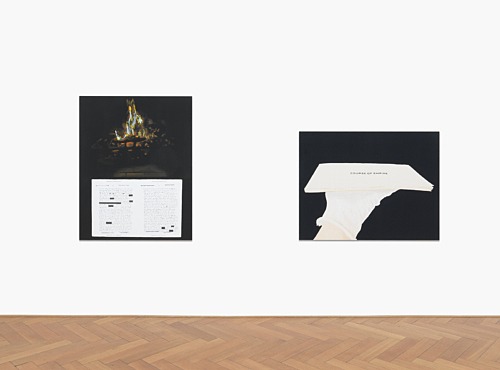 The titles of these paintings point to various leads that a close reader can follow:

Clever/Stupid promotional prize poster with parrot pair, or “Art offers the possibility of love with strangers”, 2019

“An invitation to escape from the relentless tyranny of Now that keeps us hooked to the irresistible fruit of American Empire,” is one of the sentences I got paid to write for Raymond Pettibon’s New Museum catalogue in 2017, 2018

A book object made for Parkett in 2013 called Dishonest But Appealing, 2019

Bobby Jesus’s unwritten picaresque memoir in the form of a book object with a hidden chamber between the pages to stash away secret things, 2019

Reading the Gore Vidal book of interviews Julian Assange was carrying as he was carted off to prison in
April 2019, 2019

Reading about the Americas before and after Columbus in the 15th century, 2019

Reading Neil Postman’s Entertaining Ourselves to Death written in 1985, 2019

Reading Edward Said’s Representations of the Intellectual from 1994, 2019

In a book commemorating Ed Ruscha’s 2005 American Pavilion I contributed an essay (alongside Joan
Didion no less!) entitled Always the Same, Always Different, 2019

Reading Mohamedou Ould Slahi’s Guantamo Diary on the laptop by the fire not long before he was finally released after 17 years, 2019

I’m not making a syllabus but rather capturing these haptic engagements with (mostly) American voices critical of empire. And then there’s the choice to paint, the re-orientation/transposition of long-form thought, my own battle with an inability to write and utter failure to feel stabilized by any sense of value or agency — an unmoored mind, trapped in the market, confused about what constitutes community and the social... The title of the show is snatched from Walter Benjamin’s essay “Unpacking My Library”:

“It is a frequent occurrence that someone gets stuck with a high purchase price because he kept raising his bid – more to assert himself than to acquire the book. On the other hand, one of the finest memories of a collector is the moment when he rescued a book to which he might never have given a thought, much less a wishful look, because he found it lonely and abandoned on the market place, and bought it to give it is freedom – the way the price bought a beautiful slave girl in The Arabian Nights. To a book collector, you see, the true freedom of all books is somewhere on his shelves.”