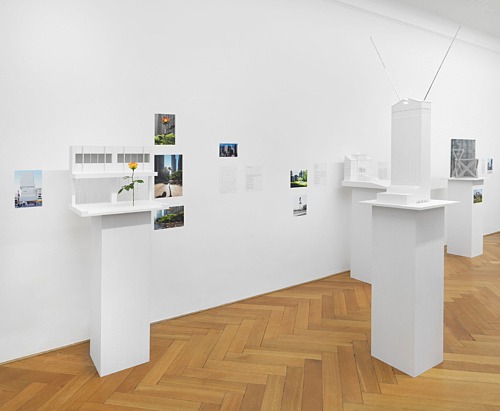 We are very pleased to announce Isa Genzken’s 13th solo exhibition at our gallery.

On the occasion of her 70th birthday, the artist will show an installation of models of projects for outside, conceived by her until now. Alongside these, the artist will present a selection of earlier and new works that have an explicit and referential connection to these projects.

The exhibition also announces the upcoming catalogue of Isa Genzken’s projects for outside, to be published in early 2019 as the first volume of a comprehensive catalogue raisonné of the artist’s works.

Isa Genzken’s projects for outside were first shown by the artist in model form in the Central Pavilion of the 56th Venice Biennale in 2015, and in the 2016 solo exhibition Models for Outdoor Projects at the Bundeskunsthalle Bonn.

Isa Genzken was this year awarded the prize of the Nasher Sculpture Center in Dallas, to be presented to her in Dallas in 2019. In 2017 the artist was awarded the Goslarer Kaiserring. Her most recent institutional solo exhibitions include Martin Gropius Bau, Berlin (2016), the Stedelijk Museum, Amsterdam, the Institute of Contemporary Arts, London (both 2015), the MMK Museum für Moderne Kunst, Frankfurt a. M. (2015), as well as at the Museum der Moderne, Salzburg, the Kunsthalle Wien, Vienna (both 2014), the Whitechapel Art Gallery, London and the Museum Ludwig, Cologne (both 2009).