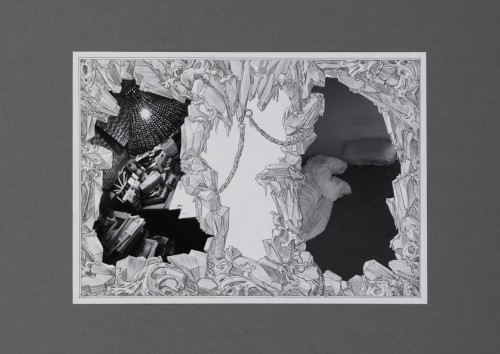 On the occasion of his fifth solo exhibition at Galerie Buchholz, artist Julian Göthe presents a new group of sculptures and works on paper. The currents that must have inspired these works are as hard to intercept as they are impossible to list. “A lion made of assimilated sheep”, this is perhaps how Paul Valéry would call Göthe's oevre, having delicately fed on and digested so many inspirational references.

Only clue that the artist provides is in the exhibition's title, which is also the title of a song by British musician Colin Newman – Their Terrain is track number one on the album Commercial Suicide, 1986. The last verse reads:

After this, what next could be a question?
Build the megalith again
As for history we may be on a winner
Or the chorus, it's a shame

The parodic charge of Göthe's work finds here another fortunate momentum, a distinctly sardonic laughter permeates the rooms: objects become strange, undefinable “attractors.” It is with them that Göthe touches the limit of his aesthetic adventure – which is also the end of the adventure of representation.

Göthe's megaliths actually resemble a Saint Laurent bow-tie; the twin sculptures could almost be a tart refraction of a Giorgio De Chirico sketch for the Faust (I'm thinking in particular of a drawing where Mephistopheles is portrayed as wearing a blond wig, and an explosive set of ostrich feathers seems to have set his hat on fire). The practice of the DeChirichian transvestment can be related to Göthe's also for its dissimulatingly serious aspect. The contradictions that are allowed generate, in fact, a sort of green laughing, one that is desecrating and ironic – the sculptural pieces are staged, or if you prefer, they are masked. Their aiming to the sublime is one step away from precipitating towards its opposite, which is the realm of comedy.

With Their Terrain Julian Göthe continues to investigate the possibilities of atemporality, of the eternity of the self and of the “being-at-work”, which can be pursued within a daily, mundane dimension, only in a parodic form – an image this one, which describes the nature of parody also according to the most recent, profane and “profanizing” interpretation given by Agamben, by which “essential to parody is the presupposition of the unattainability of its object.”

Can aesthetic illusions be possible? Or, is there a way to reach an an-aesthetic illusion, a radical one – one that holds the secret of seduction, of magic? At the borders with hypervisibility and virtuality, is there still a place for the image? For an enigma? For a power of illusion... for an authentic strategy of forms and appearances?

Against every modern superstition of “freedom”, Julian Göthe maintains that liberating a form or a figure, is not a particularly exciting task. On the contrary, his indulgence is to put forms into chains: the only way to really free them is to interlock them, finding the rope which, gently, chains them to one another. After all, forms spontaneously generate themselves and join each other - fine works are daughters to their form; it was born before them - and Göthe shows us that the artist's best movement consists in the ability to enter the intimacy of such a process.

It is way better for you to have coerced, gently, a free man, than to have freed a thousand slaves.
Omar Khayyam, ca 1120 A.C.E.

Julian Göthe is dedicated to those objects whose secret is not in their expression, or in their representative form, but in their condensation and successive dispersion in the cycle of metamorphosis.

In fact, there are two ways of missing the trap of representation: the way of the interminable deconstruction – where art looks incessantly to itself, dying in mirrored splinters; or to simply exit representation by leaving behind all the attempts at reading, interpreting, deciphering; forgetting the critical violence of meaning and counter-meaning (senso e controsenso) in order to arrive there, where the appearance of things originates. There where things simply allege their presence in multiple and multiplied forms, according to the spectre of metamorphosis.

To enter the spectrum of dispersion and to enter the matrix of forms' distribution, is what constitutes the very form of an illusion, the put back into play.
To surpass a form means to go from one form to another: the very principle of illusion is so described, for the destiny of a form can only be a form. And to make that happen, you obviously need to be an illusionist.
Julian Göthe knows that art is, before anything else, a trompe-l'oeil, a sight deception, a life deception, just as much as theory is a deception of sense. And exactly like theory, art does not consist in having ideas (or in flirting with reality), but in creating some decoy-illusions: traps into which sense might be so naïve to fall onto. By situating his traps, Göthe finds a fundamental form of seduction, a form that I would call anthropological – for its getting so near to drawing that most generic form, which is the one of the world in its appearing. Because the world appears to us before having acquired a sense, before having been interpreted or represented, before it became real - like it did later on, in a way that is, apparently, only ephemeral.