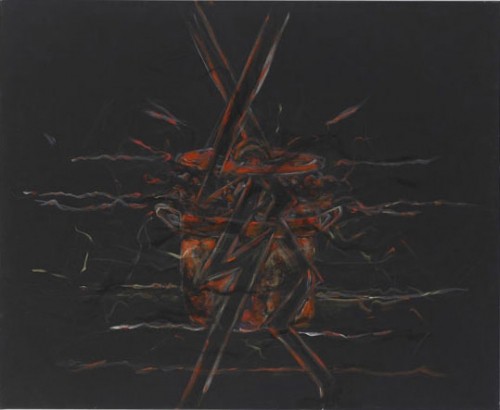 “Her touch – pinching the egg – is in itself a bit ambiguous, a kind of cruel caress.
(Imagine being an egg and having your skin pinched off your body!)”
Ewa Lajer-Burcharth, from a lecture on Chardin delivered in Frankfurt, July 2010

“The harsh constraints and exigencies of objects”: this is how Bruno Latour describes his field of inquiry in an essay entitled “The Berlin Key, Or, How to Do Words With Things”, originally published in 1991, from which the present exhibition takes its title.
As most Berliners will know, the Berlin key is a special key equipped with two symmetrical ends developed for use in the outer doors of the city's apartment blocks. You put the key in the lock, turn it 270 degrees, then push it halfway through the lock in order to retrieve it on the other side only by undoing the operation and locking the door again. The Berlin key is an example of what Latour calls a program of action, a materialization of the disciplinary command to lock the door behind you.
What would a painting be, if it were programmed like the Berlin key? It would insist, harshly, that you do something with it, use it to get somewhere, but only in accordance with its logic. The paintings in “Berliner Schlüssel” are meant to intervene in this way, with some even calculated to produce specific effects in specific people. At a moment when electronic passcode systems are phasing out the Berlin key (and, perhaps analogously, a model of quick decoding becoming ever more dominant for how art is looked at and talked about), these paintings make all kinds of demands. They can be real divas.
David Joselit has argued that Koether's work renders “painting beside itself”. The mannered edifice of “Berliner Schlüssel” – with its references to the history of Berlin architecture, specific works in museums in Berlin (such as the Poussin self-portrait from the collection of the Alte Gemäldegalerie and the Egyptian statue from the Neues Museum), her own past shows, the gallery stable and, most concretely, the rooms where the work is shown – constructs a space in which, fraught to the max, a “Thirst for Aesthetics”, as she has recently called it, might be quenched. And she does this, in part, by getting the paintings off the gallery wall.
Such a claim generates friction – if we laugh, it is because Koether, as a feminist, uses the power of the seriously unserious. When we arch our heads to sensitively inspect the surface of a painting, after Chardin or Francis Bacon or Frans Snyders or Bronzino or a Roman fresco from the city of Boscoreale, under the gray light coming in through the windows of an elegant Berlin apartment, which has never looked less elegant, we are liable to get an eyeful of iridescent paint.