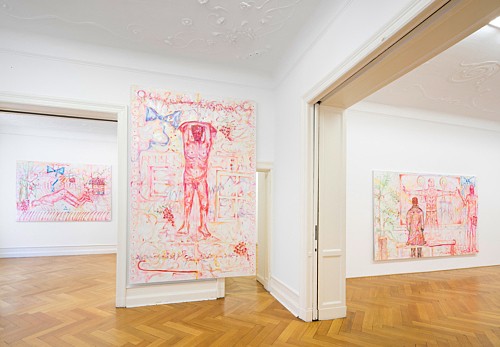 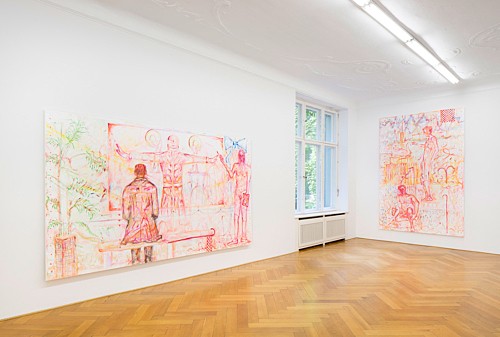 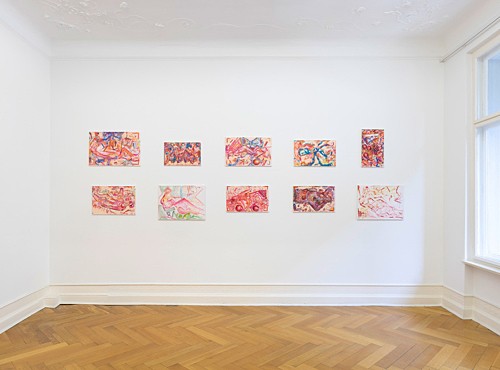 With “Zodiac Nudes” Galerie Buchholz is proud to announce its seventh solo exhibition with Jutta Koether, her second at Galerie Buchholz’s Berlin location. The installation, on both the first and second floors of the gallery, is comprised of new paintings.

In many European languages, painting is a feminine noun (die Malerei, de schilderkunst, la peinture, la pittura, la pintura,). Accordingly, allegorical portrayals from the 16th century personify it as a female figure who seduces the painter, always a man, into devoting himself to her, body and soul. But how can women painters position themselves within this erotic mise-en-scène, which also imagines the act of painting as one of male procreation, implying their exclusion from it? As Jutta Koether shows in Zodiac Nudes, they can do it by assimilating the position of the “Bad Dads”, as she once called them, in order to set up their own painterly system (monochrome red pictures) that radically calls itself into question, expanding and reaffirming itself, over and over.

In paintings like Formula Won Balthus PdF #3 or More Naked Than Naked #2 Koether takes figures from pictures by controversial painters like Lucian Freud and Balthus and turns them to her ends, to develop her painting. Whereas in Naked Portrait on a Red Sofa (1988-91), for example, Freud’s impasto technique gives his daughter Bella a body that is pallid and creamy, in More Naked Than Naked #2 Koether opts for a more transparent, meshed physicality. And in her painting, the isolated body on the sofa is replaced by a turbulent web of relationships. In some cases, these differences in approach and concept are humorously exaggerated, as when Koether gives her version of Freud’s reclining female nude a substantially rendered penis. Her subject is clearly not the same. Nonetheless, many poses and gestures of her mainly male nudes can be traced back to portraits by Lucian Freud, like the curling up on the floor in Freud Broodthaers #1 or the arms crossed above the head of the male figure in Freud Broodthaers #2. The obvious appeal of these gestures lies in their emotional charge: they convey complex, contradictory affects. As a result, it necessarily remains unclear whether these figures reduced to their naked bodies are utterly at the mercy of life, or whether they find themselves in a sheltered space where they can show their ambivalent feelings and their vulnerability.

What Koether deals with in her paintings, then, are the formulaic gestures of an exhausted and mostly male self. The evocative magic of such pathos formulas is heightened by motifs typical of her work: garlands, dotted picture outlines, circle shapes, grid-like zones, apples and angular stock market curves. These visual leitmotifs are deployed like rhetorical effects, sometimes passing through the bodies. The recurring signal of the blue ribbon, borrowed from the still lifes of Daniel Seghers, is a reminder that painterly signs only suggest meaning. For one cannot conclude from the dynamism of these lines that the artist was in action, in motion. On closer inspection, the explicitly energetic lines are in fact placed with care and consideration to achieve a lively effect. Above all, however, it is the intense color schemes of the Zodiac Nudes that makes full use of painting’s ability to suggest life. As well as variations on red and pink, there is plenty of black, green, blue, various golds and shades of white. In some areas, there are iridescent colors (oil sticks) that draw attention to themselves with a kind of glowing techno shimmer. Here, Koether showcases her preference for a diversity of painterly means.

The smaller “crusty” formats and heart-shaped canvases, too, have several pasty layers of paint, giving them a physical, substantial appearance. When, in one of these crusty paintings, the letter “K” for Koether rises up out of a layer of black paint, this can be read as a reference to the particular suggestive power of the impasto technique – the way it feeds the vitalist fantasy that the life and work of the artist are directly deposited in its many layers. The artist has inscribed herself in these layers, in the form of the “K”. The painting in question is also a letter picture that brings language into painting, underscoring its semiotic character. In Freud Broodthaers #2, Koether renders homage to a particularly crude language painting by Marcel Broodthaers, Amuser ou Le plus beau tableau du monde (1967-1970/1971-1979), borrowing the word “Amuser” and the letter “E” from the original. The central figure in this painting is the above-mentioned nude with crossed arms from the Freud painting – a kind of Man of Sorrows. The fact that Koether brings together two seemingly incompatible opposites here – the conceptual semiotic painting of Broodthaers and the figurative corporeal painting of Freud – is also reflected in the way the picture is hung, half blocking a doorway. But one might also understand the melancholy pose of the Man of Sorrow as a comment on the transformation of the art world into an amusement zone that Broodthaers addresses in Amuser ou ....

With its reference to the zodiac, the exhibition’s title also suggests that Koether understands painting as a constellation. Just as the zodiac circle makes connections between specific character traits and times of year, between the individual and the world, Koether, too, seeks to link the emotional states of her figures to an outside.

In Bond Freud National Gallery, everything is connected to everything: a picture within a picture of a racing driver and a male onlooker sitting on a bench echoes a scene from the James Bond movie with Daniel Craig, Skyfall. The artist herself also appears, in the guise of Lucian Freud. With the recurring motif of the racing driver, of which she has already painted three other versions, Koether looks back here at her own output, except that the figure’s gesture – arms outstretched, somehow defensive – seems to symbolically block access to the picture itself. What’s more, we see the male viewer only from behind, marking reception as an ultimately inscrutable process. In her appearance as a painter, Koether, like Freud in his 1992 self-portrait, holds a brush in one hand and a palette in the other, as if continuing to paint the picture within the painting. But her gesture, that switches between painting and showing, also suggests that she is explaining her work to the male Bond viewer, giving her the quality of a discourse artist.

On the one hand, then, Koether performs a slipping into Freud’s body, as signaled by the broad “manly” shoulders. But this overdrawn identification with an artist not appreciated by progressive art historians also serves to articulate a more discursive-material approach of painting. With her recourse to specific pictorial formulas, then, she vehemently demonstrates a different understanding of herself as a painter.