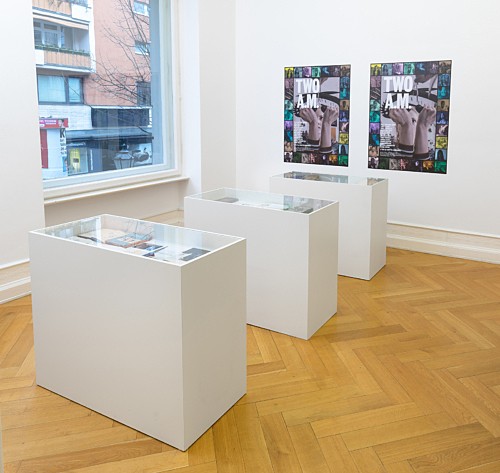 A bestselling author of the Weimar Republic and a glamorous figure of 1920s Berlin, Irmgard Keun established the concept of modern “girl culture”. Her novels are written in the manner of “Neue Sachlichkeit” (“New Objectivity”), direct, observational, almost staged in their nature and strongly informed by film and popular culture.
She was blacklisted after the Nazis rose to power and forced into exile and would later fake her own suicide and sneak back into Nazi Germany under an assumed identity. Mostly forgotten after the war she experienced a literary renaissance in Germany before her death in 1983.

The fantasy film Two A.M. is based on Irmgard Keun’s novel After Midnight (1937), describing two days in the life of the heroine Sanna in Frankfurt during the rise of the Nazis.

Two A.M. (2016, 40 min, HDV, colour)
Punky, streetwise Sanna bridles at her aunt’s traditional ways. Her adopted family are members of the Watchers, powerful information-obsessives whose unusual telepathic abilities and sociopolitical pretensions only manage to get on Sanna’s nerves. But after she abandons the family home and her young lover for the city, her dream of a brilliant urban life quickly falls flat. From her half-sister Algin, in despair over a faded singing career, to Algin’s depressive and love-obsessed partner Lisko, to Hedy, the splenetic, paranoid journalist who’s inadvertently caught Lisko’s eye, everyone in the big city seems to be totally wrapped up in their own serial dramas and star-crossed affairs. She quickly acquires a problem of her own when her lover, Franz, reappears in the city along with her unpredictable, sinister Watcher sisters. Sanna and her friends bounce from bar to bar towards a party that will bring everyone’s minor ennuis and compulsive intimacies together with unforgettable results. Jeff Nagy