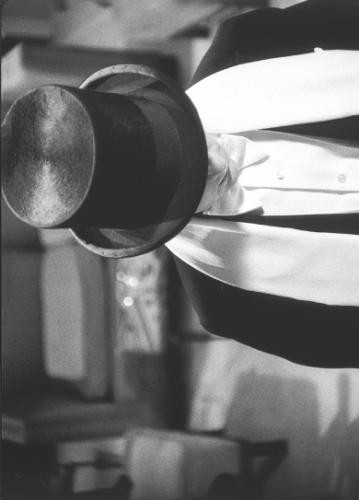 This exhibition by Los Angeles-based artist Mathias Poledna (b.1965), his third solo show at Galerie Buchholz and his first solo exhibition in Berlin presents his recent film work, "A Village by the Sea", and a new suite of works on canvas.

"A Village by the Sea" (2011) is a 35mm black and white film produced by Mathias Poledna to evoke a scene or excerpt from a late 1930s, early 1940s musical. The film was shot on a sound stage in Los Angeles in a period-style set, designed and furnished to convey the interior of an elegant apartment or hotel suite. It features a musical number based on a period song by French composer and singer Charles Trenet which has been re-written and arranged as duet and in the style of the American Songbook tradition. The instrumention of the original song, a chanson, was significantly expanded in scope as well as in type, now including woodwinds, brass and harp in order to achieve the lush sound associated with this period. The track was recorded with a 30-piece ensemble of session musicians at the Eastwood Scoring Stage at Warner Brothers Studios in Burbank, California, one of the few remaining recording stages from this peak era of the studio system.

Choreographed along a series of tightly coordinated classic tracking and master shots, "A Village by the Sea" features two characters -a female and a male - with an ambiguous, possibly romantically tinged past. With motives of reminiscence, nostalgia and love lost reverberating both in the lyrics as well as in the performers' guarded interactions, they inhibit a world of extreme artifice, melancholia and sentimentality that is only occasionally punctuated by comical ambiguity.

While "A Village by the Sea" is specifically motivated by Mathias Poledna's interest in the period of the Great Depression and the early years of WWII it is also endebted to other moments of popular culture, in particular concepts formulated around the notion of "New" or "Intelligent Pop" in Great Britain as well as to the reception American studio productions from the "Golden Era" have received in France during the 1960s.

The film will be screened throughout the duration of the exhibition at the nearby movie theater Delphi Filmpalast (Kantstraße 12a). The opening screening takes place on Friday, 27 April at 1pm.
(The next screenings are on Saturday, April 28 and Sunday, April 29 on 1pm.
Each following Saturday until June 16th the film will be presented at 1pm).

In the gallery - conceived by the artist as an antichambre to the program of presentations of the film - the rich black and white palette of "A Village by the Sea" is juxtaposed with monochrome color. Serving as both a complementary as well as antithetical offering to his film, Mathias Poledna has created a new suite of 36 works on canvas in a single color. Their light pink hue is loosely approximated from the Italian newspaper "La Gazzetta dello Sport". Published daily and ranking among the highest circulating newspapers in Italy, "La Gazzetta dello Sport" is instantaneously recognizable for the tinted bulk paper it has been printed on since it was first published in the late 19th century. While the specific iconography and the wealth of sentiments expressed in "A Village by the Sea" invites instant recognition this body of work remains decidedly opaque and resistant to placement.
www.galeriebuchholz.de