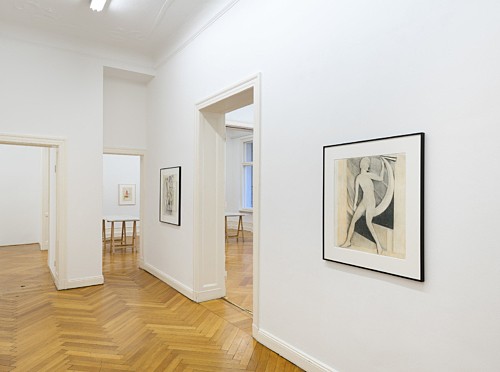 Mayo Thompson (b. 1944) is from Houston, Texas and lives in Los Angeles, CA. His formal education includes Garden of Arts Kindergarten until Holy Rosary Elementary School through fifth grade, then Moye Military School until high school at Cascia Hall College Preparatory School, from which he received a diploma in 1962. He went on to St. Thomas University, trying variously, off and on, in some cases simultaneously, Pre-Law, Creative Writing, English and American Literature, Philosophy, and Art History, before dropping out and starting a band with Frederick Barthelme in 1966 ­ The Red Crayola, after the first album, spelled with a K in the USA for legal reasons.

With that began professional life. No record of his private life having appeared or been made available, any sense of the person will have to come from what can be reasonably inferred from factual stuff such as production schedules and tour dates, and from hearsay and mention. Anybody interested will find that the band project persists as an instrument, so its history amounts to an index in and of curves in more lives than his alone. There have been several incarnations, in America, and in Europe, discs, and information and opinion concerning them are readily available online. When it comes to what can be read into and out of such detail, bearing in mind that how things are put is characteristically interested, things in the Wikipedia biography being prime examples, a reader who plows through will be in a position at least to sense something of his sense of the possible, and a timeline from the business associations and collaborations he developed, if only indirectly. For a sense of his aesthetic, if not one’s own musical entertainment, dipping into the catalogue, a listener will find if nothing else that each record is a record of one of a set of sets of diverse formal approaches to the problem of making music to which he was integral at various times and places. Further such sense is to be found relative to Thompson’s work as a record producer, mostly that with bands connected with Rough Trade Records and other labels in the late-70s, and early- to mid-80s ­ Stiff Little Fingers, The Raincoats, The Fall, and James ‘Blood’ Ulmer being examples.

Since 2012, when a continuous performance of the band was staged via Skype during the Whitney Biennial, Mayo Thompson has begun to openly pursue his lifelong interest in visual art.

The exhibition at Galerie Buchholz features drawings that Mayo Thompson produced in 1970 for the book ‘Rangoon’ a collaboration with Frederick Barthelme; character studies from the 1980s for the opera ‘Victorine’, a collaboration with Art & Language; as well as new works on paper.

During the opening of the exhibition Josephine Pryde will recite the aria ‘What can I say to these crazy police?’ from the opera ‘Victorine’ accompanied on guitar by Ben Caton.

In 1860s Paris, Police inspector Denis treats paintings of the female nude as evidence of violence and even murder. His forensic interpretations supply these paintings with a secular aura. A cast of artistic luminaries and demimondaines cause him confusion, but the inspector persists, finally concluding that the would-be murderer’s aim is to destroy a precious emblem of the nation. Artist and artist’s model Victorine Meurent poses for Manet as ‘Olympia’. Manet has not yet completed the painting. Can the inspector save Victorine?
www.galeriebuchholz.de