Works on Works on Paper 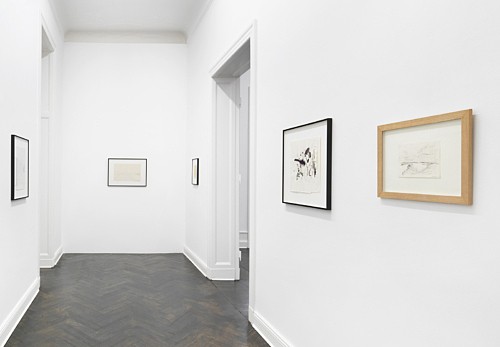 Galerie Buchholz is pleased to announce an exhibition with two groups of works on paper, one by Michael Krebber (*1954 in Cologne) and one by Albert Oehlen (*1954 in Krefeld).

The works by Michael Krebber range in date from 1986, the year of his first exhibition as a painter, to 1991. In 1992, he compiled a luxurious catalogue surveying the works on paper he had produced thus far. Designed by Jörg Schlick, this portfolio of 48 loose-leaf plates, on thin gilt-edged paper, includes reproductions of all the works by Krebber currently on view.

Albert Oehlen made a series of drawings in 1994 over a selection of the leaves from Krebber’s catalogue, which he showed the following year in a solo exhibition entitled Abortion of the Cool at the Gesellschaft für Gegenwartskunst in Augsburg. With certain examples from the series, Oehlen uses motifs from his own work, while in others the forms emerge out of the drawings by Krebber that serve as their support.

In Works on Works on Paper, this complete series of 16 works by Albert Oehlen will be accompanied by a selection of the drawings by Michael Krebber visible in the reproductions beneath them.
www.galeriebuchholz.de