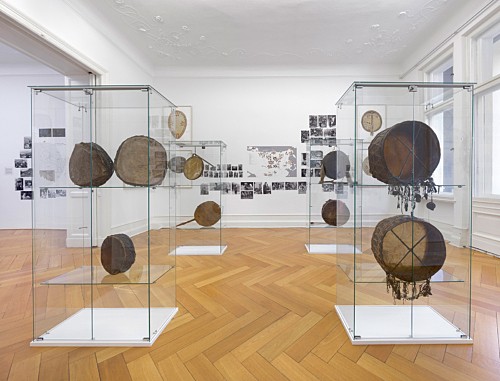 The exhibition at Galerie Buchholz is dedicated to the research that the anthropologist Michael Oppitz undertook in various regions and local communities in the Himalayas. It illustrates the wide range of interests he pursued over the course of more than five decades. The show in Berlin foregrounds three thematic complexes: 1. the various specific ways in which some mountain peoples have been able to maintain distinct identities despite the state’s efforts to impose a unified writing culture; 2. how a single object—the shamanic drum—can serve as a prism representing the practices of these peoples’ healers, which are independent of the major writing-based religions; and 3. how a vision of paradise that originally arose and spread on the Tibetan Plateau found its way to the West, where, in the form of the verbal icon ‘Shangri-La,’ it underwent numerous popular-cultural transformations. The exhibition in Berlin will be followed by a second show scheduled to open at the Kolumba Museum, Cologne, in June 2018 that will focus on another set of themes.

Studies on the edges of writing

The thematic complex that informs the title of the exhibition Enquiries on the Fringes of Writing in Berlin highlights four societies in the Himalayas studied by Michael Oppitz: the Sherpa in eastern Nepal; the Magar in the country’s northwest; the Naxi in northern Yunnan; and the Qiang in northwestern Sichuan. Each of these four communities speaks its own language, although the national languages—Nepali in the former two cases, Chinese in the latter two—are dominant in official use. Each society has devised a distinctive solution in its relationship to writing, and so each of these four solutions will be the subject of a separate section of the exhibition.

The Sherpa, whose ancestors migrated from eastern Tibet to Solu Khumbu in the Mount Everest region ca. 500 years ago, have remained true to their Tibetan roots throughout their history even though they have long been citizens of Nepal: Among themselves they speak a Tibetan dialect; they adhere to a form of Tibetan Buddhism developed by the Nyingmapa school; and they preserve their own historical and genealogical traditions in written documents. The latter are composed exclusively in Tibetan script; the sole exception are documents concerning relations with the state of Nepal, which are in Nepali and written in Devanagari.

Where the Sherpa entrust much of their cultural heritage to paper—in the form of Tibetan-style books, scrolls, or bundles sewn together—the Magar of northwestern Nepal rely entirely on memory to preserve their traditions. That is true in particular of their religious specialists—native faith healers and shamans—who recite epic songs that contain their extraordinary knowledge during séances, an oral live performance that also lets them impart their teachings to their successors. Although some of them are literate, writing plays no part in the reproduction of their cultural heritage. Their origin myths, ritual texts, knowledge of the natural world, and medical learning do not exist on paper, unless an ethnographer has come to record them. Instead of books, the carriers of the indigenous Magar traditions use drums as pacemakers of the verses that contain their heritage. Only the astrologers, who draw on an external Hindu tradition in the exercise of their art, employ writing in the form of illustrated handbooks.

At the far southeastern end of the Himalayas, in northwestern Yunnan, the Naxi have invented a medium for use in their local religious practices that charts a middle course between writing and orality. As with the Magar, shamans and local priests must rely on memory when they recall their ritual knowledge; but they can lean on an expedient that facilitates the reproduction of their otherwise oral knowledge: pictographs that jog their memories like cues. These pictorial symbols are exclusive to their own local culture and a highly original contribution to the transmission and preservation of religious and cultural knowledge. Derived from painting through a process of abridgment, the Naxi pictographs are way markings that allow for the complete and uninterrupted recitation of oral texts.

A considerable number of Himalayan and Southeast Asian small societies living on the edges of surrounding nation states, whose control of the areas rests on writing no less than on military and armed power, have no writing culture of their own nor one borrowed from another ethnic group. What they have instead is a myth adapted to their specific situation that partly explains their inferiority vis-à-vis the state while also bolstering their sense of self-worth: a myth according to which they formerly possessed writing but lost it due to adverse circumstances and subsequently did not regain it. In other words, these small local cultures live in the awareness that they forfeited writing and so were catapulted into their present state of orality. One of these insular minorities amid the vast ocean of writing are the Qiang, the descendants of an ancient people on the Chinese periphery in northwestern Sichuan. They, too, maintain their traditions through oral practices and transmit them to the next generation by way of recitation accompanied by rhythmic drumming. They also own a small number of fanfold-style picture books, which they managed to salvage as the Cultural Revolution was raging and now exhibit as prestigious objects; but they are unable (or no longer able) to decode the pictorial narratives for themselves. In the past, these picture books, which are even further removed from the functions of writing properly speaking than the pictographs of the Naxi, probably served as oracles, horoscopes, and sources consulted by astrologers.

The drum as embodiment of the shamanic cosmos

The shaman’s drum is not just a rhythm instrument with which faith healers add an acoustic component to their rituals. It is a self-contained embodiment of the cosmos in which their owners travel in the course of their séances. The drum reflects an entire worldview, which manifests itself in the images the religious specialists draw on the leather drumheads. These drawings usually represent a tripartite cosmos composed of a netherworld, the earthly world, and a higher sphere the shaman traverses on his ritual journeys in order to enter into contact with the world of supernatural beings and conclude a bargain with them to his patients’ benefit.

The drum’s numerous functions—as a musical instrument accompanying the recitation of mythical songs, as a pacemaker of ritual dances, as a vehicle on which the shaman travels through space, as a defensive and assault weapon against negative powers, as a diagnostic and prognostic instrument—make it a kind of all-purpose companion to its owner. Like he, it has a certain lifetime allotted to it—born from a tree that needed to be cut down and a wild animal that was killed, initiated and instructed in the healer’s duties, it will die with its owner: shattered and exposed to the elements on his burial mound. But most importantly, the drum serves the shaman as the preeminently suitable means to recall the dormant treasures of oral literature from memory and perform them for his congregation.

Just as each drum has its own lifetime, each is a unique individual. No two shamanic drums are entirely identical. That is one side of their morphology; on the other hand, all drums derive from the same basic type, regardless of whether they come from the Himalayas or the vast expanses of Siberia: all shamanic drums are frame drums made of a wooden lath bent in a circular or oval shape and a membrane stretched over this frame. The handle is usually attached on the inside beneath a single-side drumhead or, much less frequently, on the outside of the frame of a double-headed drum. Given their typological uniformity and unique individuality, drums of this kind can be localized with great precision, especially since they also show regional stylistic features. These supra-individual characteristics may be described as ‘islands of form,’ whose limited number shows gradual transitions from island to island. That is why shamanic drums may be regarded as elements in a single continuous web of metamorphoses.

The object anchoring the third thematic complex is an artifact of Western popular culture: a pinball machine called Shangri-La. Made by the manufacturer Williams, the model came on the market in 1967 and was widespread in gaming arcades and bars in the United States and Europe for several years. Its heyday coincided with the period of the greatest popularity of pinball machines. Michael Oppitz’s iconographic study of the Shangri-La’s artwork was first published in French in L’homme, the anthropological journal founded by Lévi-Strauss. Drawing on the methodology of semiology, he dismantled the pinball machine’s artwork into its constituent elements and traced them back to Asian models. What came into view was a tableau of pop à la Tibétaine.

The iconic pinball machine would have been inconceivable without a literary antecedent, a bestselling novel of the 1930s, James Hilton’s Lost Horizon, in which the term Shangri-La first appeared as the name of a monastery hidden somewhere in Tibet whose residents live happy lives of moderation unscathed by the ravages of age; and the 1937 Hollywood screen adaptation of the same title by Frank Capra. Yet the novel – for its part – drew on identifiable sources—a concept known as Shambhala that came into currency in Tibet in the tenth century (its origins lie in India). The name of a future paradise, Shambhala inspired Hilton to coin the name Shangri-La. Once it entered parlance in the English-speaking world, ‘Shangri-La’ made an unprecedented coining career: it was slapped on virtually anything that promised pleasant exoticism with an Asian flair—hotels, travel agents, leisure resorts, tea varieties, Chinese restaurants, antiques stores, and, notably, the pinball machine. This expansion and transformation of an established conceptual coinage continues today: a striking recent example is the official renaming of an entire region in northwestern Yunnan, formerly known as Zhongdian (the old Tibetan Gyalthang), into Xianggelila—a measure expected to bring the tourism industry to the area near the Chinese-Tibetan border. In this way, the label returned to its origin. The study on Shangri-La was an attempt to document the metamorphoses of a term and the objects it designates and demonstrate that they were not just formal alterations but historical transformations.

Michael Oppitz was born in 1942 near Schneekoppe on the Czech-Polish border (Silesia). He grew up in Cologne and studied in Berkeley, Bonn, and Cologne; he earned his PhD in 1974 with a book on the history of structural anthropology, followed by a Habilitation on cross-cousin marriage in 1986. He held visiting professorships in England, France, the United States, and was professor of anthropology at the University of Zurich and director of the Ethnographic Museum, Zurich, from 1991 until 2008, when he retired.

He conducted fieldwork in the Himalayas among the Sherpa (1965), the Magar (1977–1984), the Naxi of Yunnan (1995–1996), and the Qiang of Sichuan (2000–2001). Studies on kinship, mythology, ritual, shamanism, visual anthropology, and material culture were released by various publishers; his most recent book, Morphologie der Schamanentrommel, came out in 2013. He is currently working on a study on the myth of lost writing.

His famous film Shamans of the Blind Country was shot among the Magar, a mountain people in northwestern Nepal, and premiered at the American Museum of Natural History, New York, in 1980. One of the voices in the English narration is William S. Burroughs.

We would like to thank the Ethnographic Museum, Zurich, the Staatsbibliothek zu Berlin, Candida Höfer, and an unnamed collector for providing us with objects on loan.
www.galeriebuchholz.de