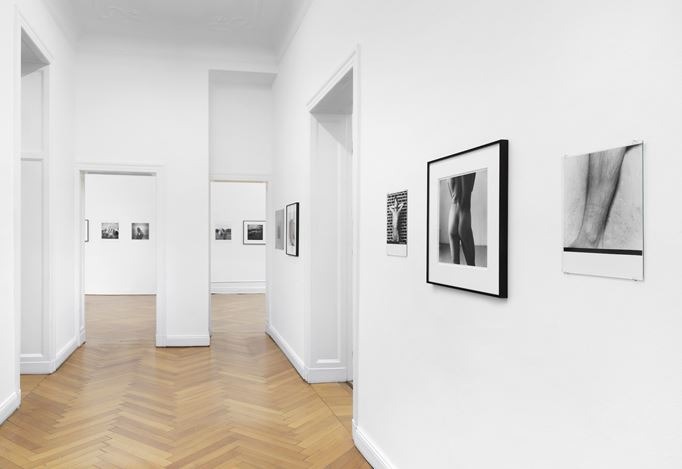 I curated myself with Peter Hujar; a risky act, but it was an invitation I could not resist. I began by listing categories of images I wanted to see: animals, water, Latino men, body parts, NYC, babies. I’ve long been familiar with Hujar’s work and chose images I knew I could be in conversation with, but I also tried as much as possible to select from amongst his lesser-known works, in particular ones that have rarely if ever been shown. Together with Nicolas Linnert and Nick Irvin we visited the archive in Queens—and as we sifted through prints, Stephen Koch, trustee of the estate, told stories and anecdotes of Peter Hujar, and approved of my selections, saying that in terms of my stated goal, to choose from the unreleased prints, I was “batting a thousand.”

I knew I wanted the close-up of the tiny baby (John McLellan) latched onto his mother’s breast, his little hand right there on the breast as well, and her hands supporting his head and lower body. You can tell he is actively sucking and pressing his fingers into the breast. He wears an old-fashioned terry ‘sleeper,’ the kind I recognize from childhood. In a second photo, Hujar pulls back and we see the full dyad, John’s mother, Dina, beatific, lit like a Madonna. John is still on the breast but his mouth is slack and now he’s sleeping, and Dina’s eyes are cast downward and her left hand takes the measure of her infant’s small frame.

But it’s the close-up of John that really gets me, makes me think of his utter vulnerability and dependence on caregivers and makes me remember my own tiny baby when I had one, and how difficult it was, and how people can tell you it will be hard but you have no idea until it is happening to you. Dina could be feeling all of this in the photo, or not. We have no idea.

It was not on my list, but while at the archive Hedi Sorger was leafing through prints and came upon Two South African Actresses. I guessed they were from the Market Theater in Johannesburg, an institution founded by my partner’s uncle, the playwright and director Barney Simon. I showed the image to Jason (Simon), who immediately recognized the older actress, Sophie Mgcina, and the play, which he’d seen and worked on in NY, titled The Long Journey of Poppie Nongena.

But he didn’t recognize the younger actress in the photo, and so some sleuthing began and he and a former student of his working in the archives of the NYPL eventually uncovered her identity, via a listing of a London production of the play which used the Hujar image in its promotional poster and identified the younger woman in the photo as the understudy (Thuli Dumakude).

Everyone agrees Hujar was unrivaled when it came to photographing animals. His horses and cows and dogs peer into the lens as though hypnotized, sometimes in pairs, and there is an immobility to these images that is truly novel, as animals don’t hold still, except for Hujar, who talked to them and connected with farm animals in rural Pennsylvania, and chickens and a rooster in the deep south in the 1950s, where he made images that are surprisingly reminiscent of the famous FSA photographs.

I unexpectedly photographed chickens at the home of the political theorist Dalie Giroux (from my film i confess), in the woods of La Pêche, Quebec. I’d gone there to photograph Dalie, but ended up shooting her animals instead. There wasn’t much light, it was early June and mostly raining, and voracious mosquitos swarmed us from all sides, which meant I was focusing the already difficult-to-focus Hasselblad wearing a mosquito net over my face, and of course the animals never stopped moving.

We visited her neighbor, the painter John Eaton, and I photographed him together with his magnificent white Percheron, Goya, who wore a custom-made, black-studded halter and roamed the yard like a dog..

Back in New York I continued to photograph horses, attempting to channel Hujar. It was August and baking hot, and I’d limbo my body through electric wire fence to reach the horses, covered in flies, some of them standing in pairs, mane-to-tail in a lovely ritual of mutual fly-swishing. I’ve never more appreciated Hujar’s photographic genius than in these flawed attempts of my own to commune with equines, as he apparently did, coaxing the animals as he took their picture.

I recently met the artist Gary Schneider, who did yoga poses for Hujar, and became his friend and printer and considers Hujar a lifelong mentor. Schneider and John Erdman opened a lab at Hujar’s urging and painstakingly processed all of his film. They printed for many artists, but the lab was more of a vocation and a labor of love than a business. In a conversation with Gary, artist John Schabel, a client of the lab, responded to Schneider’s suggestion concerning a performative aspect of analog photography, both behind the camera and in the darkroom. For Schabel, known for his eerie photographs of passengers captured through the portholes of commercial airplanes, his images were always meant to imply, in his words, the question “Where am I? What is this point of view?” For Gary Schneider, being in the darkroom interpreting a difficult negative such as Schabel’s, constituted a dynamic performance in its own right.

In the 1960s and early 70s, Hujar sometimes preserved the black frame line around his pictures, and said: “to print the film frame [implied]: this is not a painting, this is photography. This negative has an edge...[it’s] an honesty thing...”

Diane Arbus, who, among many others, conserved the frame line, or some version of the ragged border, snubbed Hujar, in part because she thought his work was derivative, and it wounded him.

In The Paris Review Yevgenia Traps, interprets Zoe Leonard’s use of the black frame as “signaling to the viewer that the image is a product of labor.” Zoe herself has suggested it’s about eliciting dialogue between an embodied maker, and the observer/receiver. In my own case, I try to ground the image through writing.

Schneider, Schabel, Leonard and I, all came of age artistically in the post-modern era; we are all self-consciously trying to signal that what’s going on behind the camera — the emotional register, the labor register, the thinking register, the mechanical register, the risk factor – is to us as important as the image itself.

Hujar was the opposite. He gifted it all to the subject and the image through patience, framing, razor-sharp focus and crystalline lighting. He apparently gave no direction and spoke very little to the human subjects in his studio. He waited for them to give to him whatever it was they were going to give, and then he took it–and after the wizardry of the darkroom, gave it back, as did Chris Marker, who said his goal, in manipulating an image, was to offer his subjects “their best moment...making them truer to their inner selves.”

The ultimate darkroom performances must have been the eight tour-de-force montages that came to be known as Sex Series (for Marion Scemama), produced by David Wojnarowicz in Hujar’s darkroom after his death, using masking and multiple exposures of images and diary fragments. I had picked Hujar’s View From The World Trade Center (bridges) from the archive because of a particular (filmic) relation I have to lower Manhattan, and slowly it dawned on me that DW had used that image — flipped, reversed and slightly cropped — for one of the Sex Series panels.

The only ‘famous’ Hujars I’d really wanted were the Hudson River pictures, and they weren’t available, until late in the game when Gary Schneider announced that he was making estate prints. How to describe the effect of these photographs? The water seems embodied, we see faces – eyes and lips– and liquid takes on a velvety smoothness and viscosity that could almost be a solid. Each image seems to have its own personality, and we sense Hujar’s presence as well, a man standing on a pier, with all the connotations of that locale, looking out and taking in the river at his feet. I wonder if he knew when he took the pictures that the resulting images would be so sensual, so corporeal and unearthly at the same time.