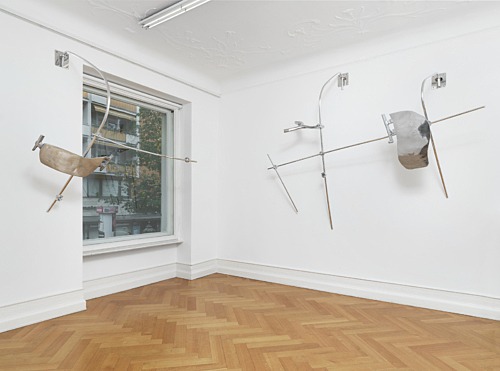 The starting point of Nairy Baghramian’s third solo exhibition at Galerie Buchholz, her second at the Berlin space, is a new publication by the artist, produced to accompany the exhibition Déformation Professionelle. This exhibition was shown over the last two years at SMAK, Ghent and the Walker Art Center, Minneapolis and was originally conceived by the two institutions as a retrospective. Baghramian, however, decided to modify this proposal and instead exhibit exclusively new works that refer back to earlier ones.

This self-reflexive inspection and reinterpretation, and the employment of such methods as the inversion, dissection and augmentation of the artist’s own work, were core themes of both museum exhibitions, and a number of these artworks are now on view in Galerie Buchholz’s first-floor exhibition space. In parallel to this, and in contrast to the museum exhibitions, where earlier and new artworks were juxtaposed in the pages of the exhibition catalogue only, here Baghramian has opted to show a selection of older artworks in the gallery’s second-floor space that illustrates the influence earlier works have had upon those displayed on the first floor.

The exhibition’s eponymous sculpture, Vitrine Rafraîchirée, 2018, is particularly representative of this practice of self-analysis, in that it specifically makes reference to the artist’s first exhibition at the gallery, Formage de tête, 2011. Laid out within a sort of refrigerated display case are a series of basic forms in colourless ceramic; these constitute the positive counterparts to comparable negative cast spaces in the silicon mats of the artist’s earlier Réchauds sculptures from 2011, which were draped slackly across minimal steel frames. One of these Réchauds sculptures is now on view on the gallery’s upper floor, corresponding to the new work.