Pictures, Before and After – An Exhibition for Douglas Crimp 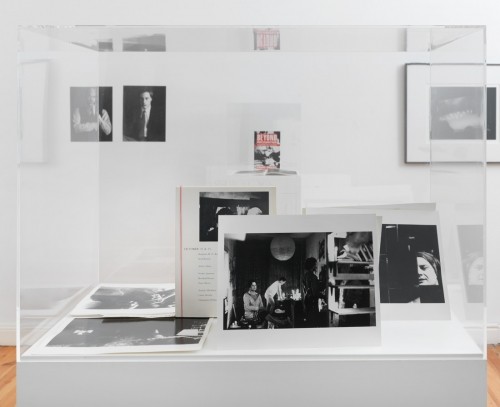 Pictures, Before and After is one of a series of events honoring the work of art historian, theorist, curator and activist Douglas Crimp who turns 70 this month. Departing from Crimp's Memoirs which will be published as Before Pictures in 2015, these events consider artistic, philosophical, queer and subcultural practices from the 1960s to the present. Whether as activist, editor, author, or participant, Crimp has played a key role in the construction, representation and interpretation of this history. The organizers, Diedrich Diederichsen, Juliane Rebentisch and Marc Siegel, together with Daniel Buchholz and Christopher Müller of Galerie Buchholz, the Arsenal Institut for Film und Video Art, and Tanz im August are all fans, friends, colleagues or students who have crossed paths with Crimp numerous times over the years.

Douglas Crimp, who arrived in New York at the end of the 1960s and worked initially at the Guggenheim Museum and as an assistant to legendary fashion designer Charles James, is undoubtedly one of the influential American intellectuals of our day. Alongside his occassional but significant curatorial projects, and his work as critic (Art News, Art Forum) and editor (October), Crimp has written some of the central texts on museological questions and theories of postmodernism (e.g. On the Museum's Ruins, 1993). He was one of the most critical and persistent voices during the AIDS crisis and arguably the one whose theoretical insights most shaped the development of activist and artistic practices, even beyond the confines of queer and AIDS politics (e.g. AIDS Demo Graphics, 1990; Melancholia and Moralism: Essays on AIDS and Queer Politics, 2004). Moreover, Crimp's writing on AIDS cultural practices directly influenced the development of the scholarly field of queer studies (AIDS: Cultural Analysis, Cultural Activism, 1988; How Do I Look? Queer Film and Video, 1991). More recently, he has continued to attract international attention though his lectures and essays on contemporary dance and on the artistic practices that emerged in the New York Underground scene of the 1960s, mainly the work of Jack Smith, Ronald Tavel and Andy Warhol (e.g. 'Our Kind of Movie': The Films of Andy Warhol, 2012)

Throughout his career, Crimp continuously corroborated his critical and theoretical insights with curatorial work. The 1977 exhibition Pictures (with, among others, Jack Goldstein, Sherrie Levine, Philip Smith), which he curated for Artist's Space in New York City, is the most influential in this respect in that it instituted a paradigm shift in artistic production and theorization. The historical overview that Crimp developed with curator Lynne Cooke in their co-curated exhibition Mixed Use Manhattan (Reina Sofia, Madrid, 2010) dedicated itself to New York City in the 1970s, the space of Lower Manhattan that was transformed by a recession into a stage for the development of new artistic practices.

Crimps Memoirs serve as the departure point for an exhibition that Christopher Müller organized –in close collaboration with Crimp himself– and that unfolds Crimp's perspective on a half century of mutual exchange and tension between artistic and subcultural practices. The exhibition, Pictures, Before and After, opens on August 28 at Galerie Buchholz in Berlin and will run through October 31, 2014. On August 24, a few days before the opening, Crimp will be a guest of the dance festival Tanz im August, where he will hold a public discussion with Belgian dancer and choreographer Anna Teresa De Keersmaeker. On the two days following the exhibition opening, August 29 & 30, there will be an international symposium in Crimp's honor at the Arsenal Institute for Film and Video Art. Alongside Crimp, who will deliver as a keynote the final chapter of his upcoming Memoirs, there will be lectures by Rosalyn Deutsche (New York), Jonathan Flatley (Detroit), Rachel Haidu (New York), Dirck Linck (Berlin) and Juan A. Suárez (Murcia), as well as the three event organizers. Following Crimp's keynote, there will be a screening of Lives of Performers (Yvonne Rainer, USA 1972).