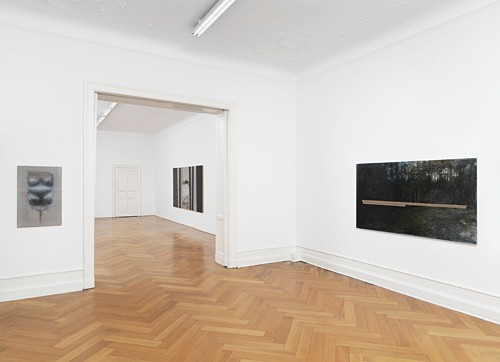 An Evening, Chapter 32 was first shown in November 2017 at the Secession, Vienna. The core of this chapter was comprised of twenty-two paintings on two walls spanning 35,56 meters, intersecting at a 45-degree angle. At the apex, where the two walls nearly meet, hung two silkscreened photographic reproductions of 16th century paintings by Flemish artist Otto van Veen (1556-1629) titled “The Persian Women“ and “Amazons and Scythians (The Creation oft he Sauromats“. Although An Evening, Chapter 32 was initially determined according to an architectural plan of the Beethoven frieze, the paintings were just as much meant to stand alone. Their unity in that installation was based on three factors: their identical dimension; their unusual installation on two walls in one straight line; and finally the black lacquered wedge that spans eleven paintings on the right.

The struggle to force these paintings into line, so to speak, was difficult and uncertain until the day I finished the installation. I realized that unlike a similar frieze of twenty-two paintings measuring 94,1 x 152,4 cm each that I made for Morning, Chapter 30, at MOCA, Los Angeles, these Secession paintings did not hold together quite as seamlessly as the previous ones had. In An Evening, Chapter 32, each painting would claim its bounded quality and seemed content not to converse with its neighbor. Once the lacquer had been applied I also began to appreciate their individual geometries as constricted by the black lacquer rather than unified by their collective shape discerned from a distance.

All my paintings are singular and bound but often they are composed through an originating invisible spatial logic of dimensions, time and media. This also extends to the depicted image: why that place, that person, that reproduced artwork, or pattern. The relevance of these questions falls away and what is left? The anarchic open image escaping in every direction through the viewer. These singular paintings removed from the context that they were thinking of interests me – to see them without the architecture and content – as individual bounded units, as if each one was a word but the sentence is lost – the word itself equally powerful and weak.

For this exhibition at Galerie Buchholz, Berlin, a selection of paintings from the frieze will be hung more like a traditional painting exhibition. The original primary, central images of the two Otto Van Veens are removed, leaving in their stead the landscape paintings that also appeared at either end of the frieze of the Secession, Vienna installation, but were less discussed. What can be seen in these paintings is a photographically based silkscreen of a grassy hill in front of a dark forest. I had taken this photograph on a recent visit to Poland, the last country I visited on a month-long research trip in the fall of 2016. This trip began in Athens and continued up through Vienna, over to Berlin, and ending in Warsaw. I was researching and working on three chapters at once: Parthian Shot, Chapter 31, planned for documenta 14; An Evening, Chapter 32 for the Secession; and finally, the Museum Sztuki in Łódź and the Museum of Modern Art in Warsaw, concerning a possible survey exhibition in 2019. I wanted to relate what I made for documenta Athens to the paintings I had already begun for the Secession. This was easier than anticipated due to the abundance of Amazonian and Persian imagery found on almost all ancient Greek temples, including the Parthenon. The highlight of my short time in Greece was visiting Delphi. I took photographs there and used a few of them subsequently in the paintings for Athens. The three last chapters seem to open up a way to not only paint figures and landscapes but also how to paint on top of photographs.

I once wrote ‘every painting is a monochrome before you begin’ but now I would say it differently. I would say every painting is a photograph before you begin. I ended my research trip in Poland several days after Trump was elected. This fact, coupled with the geographies and histories I was traversing in my research for paintings gained a new focus for me. That’s why Delphi and its Amazons and Persians to that forest in Poland seemed important to think about with regard to the Chapters and what kind of story it was spinning. I did seven versions of that one digital photograph of a Polish landscape. It does not have to say its name. I know it, you know it, and nothing changes, it is a backdrop like a painting is.

“[...] Since 2001, R.H. Quaytman (born in Boston, 1961, lives and works in New York) has organized a painting practice of working in chapters as a structuring principle that guides the creation of an overarching corpus. Quaytman has also devised various standards and systems to determine the size, material, surface, and motifs of her paintings. Rather than merely presenting the subject in an isolated picture, the paintings incorporate a method of composition based on a few preliminary rules. Archives and objects associated with the site of an exhibition often serve as a bridge between art-historical investigations and current reflections, a process that seems to generate its own version of history and how a painting is situated in the present. It is exemplified by the way Quaytman incorporates the reference:
‘Then there is the subject, always wanting to be in a perspectival space, which is what I had to think about so intently with the van Veen paintings that inspired the whole thing: how to include them in a painting made now? I silkscreened photographs I had taken of both paintings on quite a few panels in order to experiment with how to paint on them or even not to paint on them. The idea of painting on photographically based images interests me very much and the act of painting on an old painting was liberating. Nevertheless there must be a reason to do it. For the two paintings included here I devised a trick to get me started. I projected Raimondi’s historic engraving The Judgement of Paris onto both paintings and painted the outline of the myth over them. I often think about this image and what it evokes and the van Veens suggested in their composition and dimensions many affinities with the Raimondi. Incredibly the superimposition turned out to fit or align in many unexpected ways. It enabled me to find or summon a new narrative in the process of painting the painting. If a person or position or face or body part began to be visible I went with it. The lockdown of the judgment was released in a sense.’[...]“
Excerpt from the press release Secession, Vienna, 2017