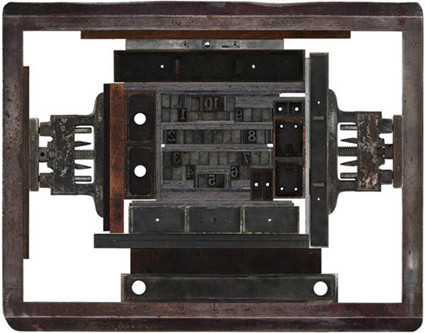 
Galerie Daniel Buchholz is pleased to announce “0110_Universal-City_1010”, Sam Lewitt’s second solo exhibition at the gallery. This exhibition extends Lewitt’s recent use of printing and writing equipment as material for works that shift between different models of technical and linguistic interfacing, between systems of production and display, between the efficiency of social communication and mute, inert things. The materials from which the work in this exhibition derive include:

1. Some of the components used to arrange movable type. This equipment was retrieved from a print shop that was exchanging its heavy metal for the light information of pixels in order tobecome (according to one employee) an “Imaging Center”.

2. The daily appearance of advertisements for wristwatches in the New York Times that Lewitt has been collecting since 2006 and which are conventionally photographed with their hands somewhere around 10:10.

The group of photographs collectively titled “Paper Citizens” came about by looking at the crude matrix for letters and locking elements involved in letterpress type composition. Rather than treat this dispossessed production framework with nostalgia, Lewitt puts it to use as an exhibition architecture for graphic signs. Lewitt has captured each component, every letter, from a collection of this equipment, manipulated it on screen, and output it at bodily scale in a confrontation between the order of alpha-numeric literacy and the physical space of spectatorship. Through this process, organizing principals of stricture and mobility hang together between a printer’s flatbed grid and the graphic texture of screen resolution. A syntax of compression thus guides the production of these images, even if their digital interpolation has made their elements more flexible.

If the “Paper Citizens” employ a global framework for restricted bits of information, then the works titled “Templates: sequence 10/.../10” and “Templates: sequence 01/.../10” give in to a parochial temptation. Here the “New York Times” becomes an organ for “Universal-City”. This work consists of two folios, each containing ten newspaper paste-up templates. But the journalistic content of these templates has become interchangeable with the advertisements that populate its pages. Lewitt records and then reconstructs the paper’s spatial design format and its temporal regularity in order to derive a system for non-hierarchical page layouts, where ads and fragmented information about war, fashion and business collapse into layers of numerically structured information. The organizing scheme for the construction of these templates is dictated by a simple algorithm, which takes the numbers expressing the days of the months of January and October 2010 and reallocates them in such a way that they subtract to derive a sequence of zeros and ones. The information on the front and back of each watch advertisement that appears in the “NY
Times” is output on transparency paper and layered on top of one another in keeping with their order in each day’s paper.

“The goal is to make the prescriptive efficiency of screens concrete. This goal is projected onto some examples from the past, whose simple script has become material used to visualize a field of information that both concentrates and deflects sustained overall focus. I understand 'Paper Citizen' to be a name for self-effacement. When I stammer, I find that llllllanguage has forced its material through the mechanics of self-representation”. – S. Lewitt
www.galeriebuchholz.de