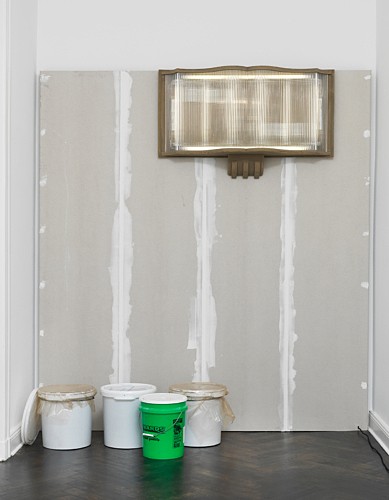 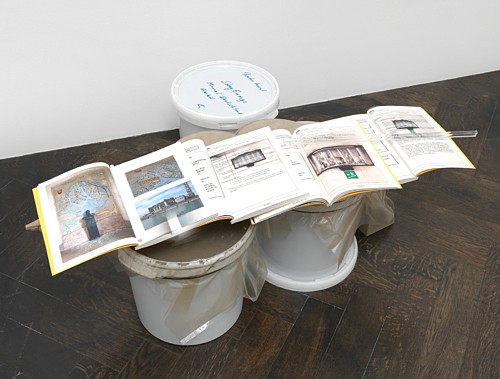 For Stranded Assets, the artist obtained a set of lamps found in the stairwell of the recently decommissioned Giuseppe Volpi thermoelectric power plant in Venice’s industrial port of Marghera.[1] The plant is in the process of being converted into a privately owned and operated distribution center – having recently become a so-called ‘stranded asset’ on the partially state-owned energy company’s (ENEL) ledgers. The original lamps illuminate Lewitt’s exhibition area in the Biennale, located in the Corderie section of the Arsenale, which housed the area’s turbines until the construction of the site in Marghera in 1922. Lining the walls alongside these lamps are a number of reproductions of their decorative carapace and murano glass shades. The reproductions are made from pure compressed fuel ash: a particulate byproduct of the fuel refinement process, which is utilized as a filler and substitute material for all manner of construction and consumer purposes, due to its light weight and inherent cementing properties when molded with water and pressure.

While the reproductions in Venice are illuminated by the original lights from Marghera, FILLER returns four of the eight reproductions on display to a functional state, supplying light to the gallery. These are mounted away from the wall on unpainted, standard sheets of FGD gypsum plasterboard, which is also materially manufactured from the particulate byproducts of fuel refinement. The four remaining reproductions have been alternately sealed up with light reflective, opaque black glass, and sedimented with the culinary byproducts of fish bones sucked clean from the laguna into which other metabolic products of industry promise to leak.

The stagecraft of energy production cycles summarily directs its waste products as far from visibility as possible. But when the tonnage of the world’s ash-ponds threatens to disastrously overflow, the material’s status on the account books magically transitions from a heap of unwanted residue, to a stock of supplies. Like the lava ash from mount Vesuvius used in the Imperial pre-modern manufacture of cement, the fuel ash that is scrubbed from the smoke stacks of the world’s power plants is used as an expedient and cheap filler for the construction industry, both being ‘pozzolana’ with naturally cementatious properties. Yet unlike lava ash and its ‘freely’ given motive source, the latter is generated by an energy infrastructure whose power distribution depends on specific technologies, laws, lobbies and labor practices aimed at keeping fuel refinement valorized, and the mobility it enables seemingly possible.

The lamps found in Marghera might be understood as artifacts whose significance has representationally shifted from emblematically locating a specific site on the power grid, to signs of their own congested circulation. To this end the lamps’ design parameters suggest questions of representational access, coagulated into the quasi-‘streamlined’ contours of ‘art decoratif’; which bulked-up the formal integuments of industrial design at the same time that its forms were supposed to signify frictionless speed. The lamp’s book-like housing gesture toward the circulation of the communicational media of mass enlightenment, while delivering the utility of mass-illumination through rationalized industry. The ash out of which these forms are compressed mark a zone of low visibility, between the sober sun of enlightenment, and what accrues from simply being able to switch on the lights. The material that piles-up in this zone fills the literal ground on which the culture that abhors it circulates, the pavement, the cement pylons rising out of it, the walls that frame out its interior. The curtain doesn’t so much lift to reveal the surplus: the stage itself has been positively built with it.

[1] Giuseppe Volpi di Misurata developed the Port of Marghera as the “lung” of the region’s cultural and industrial modernization. As Mussolini’s finance minister, he diverted state funds to military-industrial programs of land reclamation over the course of the 1920s and 1930s. This was an early echo of the campaign of sventramento or “disembowelment” which attempted to modernize urban infrastructure and clear away architectural eclecticism. Volpi eventually became the president of the Biennale —who in 1932 instituted the world’s first international Biennale of Film —and acquired the Lido’s Excelsior Palace Hotel, helping bring about Fascism’s rapprochement with capitalism and the city’s dependence on tourism.
www.galeriebuchholz.de