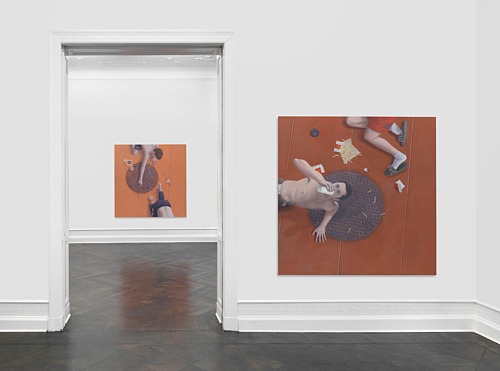 In a text from the late 1940s, Asger Jorn argues that to ask if a painting is realist, or even naturalist, documents nothing but a misguided understanding of art. The question, he argues, is rather: Is the viewer a realist, or, worse, a naturalist. Within this 180 degrees turn of perspective the difference between the two gains sharp contour: the Realist projects a latent futurity, a civilisatory purview, a (desirable) outcome into each scenery, while the Naturalist does not go through the trouble of distinguishing a present from a future, or, for that matter, from a past. He anthropologizes the given, and perceives within it an eternal humanity, a life at the mercy of its own indifference. Think of a painting like Jean-Francois Millet’s L’Angelus (1857/59), effortlessly lableable as naturalist: We see a peasant couple, bound to the soil they cultivate in prayer. Salvador Dalí, however sensed something else, another real(ity). In an interview with Thomas Eggerer, John Kelsey recounts that Dalí had the Louvre x-ray the work, and unsheathed was the figure of a dead baby, which Millet buried underneath that soil. Though Dalí’s realism might be paranoid (read: sur-real), it still senses change.

In Thomas Eggerer’s new paintings realists and naturalists alike seem to mocked. There is no need for x-rays. What lies underneath is perfectly clear. But, imagine a naturalist staring at a manhole. That sentence sounds like the opening line of a joke. Eggerer makes sensing what’s underneath go to shit, and formally he does so quite inescapably. Our realist and naturalist gazes are affixed to the lids covering civilization’s underworld. In earlier works we were placed vis-à-vis mass scenes of aimless production, or groupings of apathetic leisure. But here, in these close-ups, such disenchanted allusions to socially acceptable motifs of life’s (re)production are no longer at hand to offer orientation. We come to see what presumably was always there: the ornamental sensations of a wasteful temporality. Earphones and body parts are curling, skin and wrapping paper is draped, we are hovering above the tactile affinities of human and not human materials, watching their aimless libidinal play on warmed grounds. Warmed that is, by what ‘s underneath, by what determines our (rather pathetic) fixation to the manhole. In his late text “The Tears of Eros”, Georges Bataille argued that within a world of labour all sexuality is prostitution, because all pleasure is geared towards it’s possible (re)productive continuation. But spread out above the entrance to this reproduction’s excretions Eggerer’s boys are not put to work. And even in the collages accompanying this series, in which we sometimes find the boys sitting, or even standing, their gaze is not directed towards a horizon. Their eyes are affixed to the very ground their bodies are bending towards. Eggerer redirects life. It spreads out on a ground that houses the vectors of a sociality that draws the Realist gaze into a libidinal vertigo. And it is the two unpopulated canvases, that most poignantly testify to the two options which we are given vis-à-vis: For Realists and Naturalist there is the manhole offering a productive alignment of the gaze, albeit at the price of its desecration. But for the Symbolists amongst us, the wasted fries, the half-eaten burgers, the consumed ketchup sachets and the draped wrapping papers become the regalia of a desirous play, an affective sociality, guided by a sense of touch, a libidinous proximity that is impervious to its (re)productive ends.