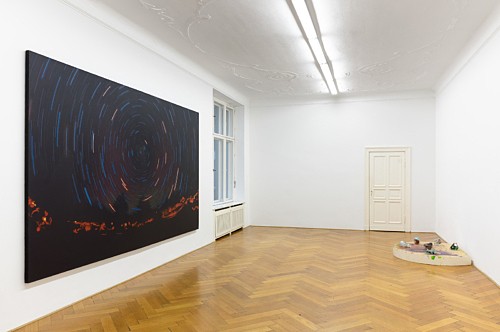 In place of a title, the juxtaposition of two photographs by Hervé Guilbert with a painting by Jack Goldstein builds an associative thematic frame for the exhibition. The writer and photographer Hervé Guibert travelled to Japan in 1984 for the newspaper Le Monde to visit Akira Kurosawa on the set of his film Ran. Despite the title of these photographs – “Tournage Ran II & III” – these two are the only known prints that Guibert made from this visit. They show extras on the film set in soldier costumes as they doze or rehearse poses in a wooden fortress. Untitled (1993) by Jack Goldstein is large format painting transposing a photographic image of a night sky with different colored concentric light circles over a landscape whose silhouette hints at tree tops and a red lava stream. Goldstein chose the sources for his paintings – depictions of explosions, war scenes mostly from WWII, eruptive forces of nature, or, as used here, astro-photographic pictures – for their maximal energetic charge. It is as if he wanted to challenge the medium of painting, itself mute, by overloading it with explosive material to demarcate the limit of its capacity. The process of making his paintings, and his part in that process, Goldstein left decidedly open.
www.galeriebuchholz.de