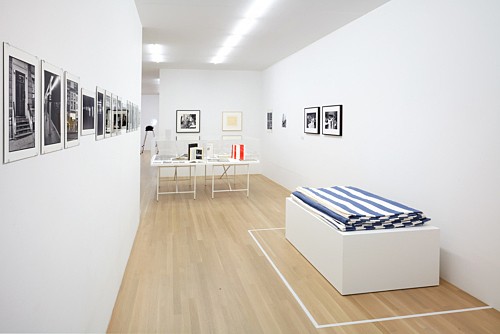 with works & contributions by

Galerie Buchholz is pleased to announce a new exhibition with Douglas Crimp, coinciding with the release of his new book Before Pictures (by Dancing Foxes Press, co-published with The University of Chicago Press).

Douglas Crimp, who arrived in New York at the end of the 1960s and worked initially at the Guggenheim Museum and as an assistant to legendary fashion designer Charles James, is undoubtedly one of the most influential American intellectuals of our day. Alongside his occasional but significant curatorial projects and his work as critic (Art News, Artforum) and editor (October), Crimp has written some of the central texts on museological questions and theories of postmodernism (e.g. On the Museum’s Ruins, 1993). His was one of the most critical and persistent voices during the AIDS crisis and arguably the one whose theoretical insights most shaped the development of activist artistic practices, even beyond the confines of queer and AIDS politics (e.g. AIDS Demo Graphics, 1990; Melancholia and Moralism: Essays on AIDS and Queer Politics, 2004). Moreover, Crimp’s writing on AIDS cultural practices directly influenced the development of the scholarly field of queer studies (AIDS: Cultural Analysis, Cultural Activism, 1988; How Do I Look? Queer Film and Video, 1991). His 2012 book, “Our Kind of Movie”: The Films of And Warhol, continued his contributions to that field.

Throughout his career, Crimp corroborated his critical and theoretical insights with curatorial work. The 1977 exhibition Pictures (with, among others, Jack Goldstein, Sherrie Levine, and Philip Smith), which he curated for Artist’s Space in New York City, instituted a paradigm shift in artistic production and theorization. The historical overview that Crimp developed with curator Lynne Cooke in their co-curated exhibition Mixed Use Manhattan (Reina Sofia, Madrid, 2010) was dedicated to New York City in the 1970s, the space of Lower Manhattan that was transformed by recession into a stage for the development of new artistic practices. And as a member of the curatorial team for the 2015 Greater New York Crimp helped to bring a historical dimension to the quinquennial survey of emerging artists.

Douglas Crimp’s new book Before Pictures tells the story of Crimp’s life as a young gay man and art critic in New York City from the late 1960s through the 1970s. The details of his professional and personal life are interwoven with a particularly rich history of New York City at that time, producing a vivid portrait of both the critic and his adopted city. The book begins with his escape from his hometown in Idaho to study art history at Tulane University, and Crimp soon found himself writing criticism for ArtNews while working at the Guggenheim Museum—where, as a young curatorial assistant, he was one of the few to see Daniel Buren’s Painting-Sculpture before it was removed amid cries of institutional censorship.

In the summer of 2014, on the occasion of Douglas Crimp’s 70th birthday, Galerie Buchholz presented an initial exhibition in Berlin highlighting his work as an art historian, critic and theorist, as well as his activist work during the AIDS crisis. A parallel symposium was organized together with Diedrich Diederichsen, Juliane Rebentisch and Marc Siegel. For this new exhibition in our New York gallery, coinciding with the publication of the book Before Pictures, Galerie Buchholz collaborated with Crimp to expressly focus on the period that he describes in his memoir, beginning with his arrival in New York and ending with the seminal Pictures exhibition at Artist’s Space in 1977. This exhibition features key art works, documents and other materials that Crimp encountered and engaged with in his early life in New York, including Daniel Buren’s Painting-Sculpture, his infamous contribution to Guggenheim Museum’s 1971 International Exhibition, on view here for the first time since its initial installation. Zoe Leonard, a longtime friend of Crimp’s, produced a new series of photographs for the exhibition.
www.galeriebuchholz.com