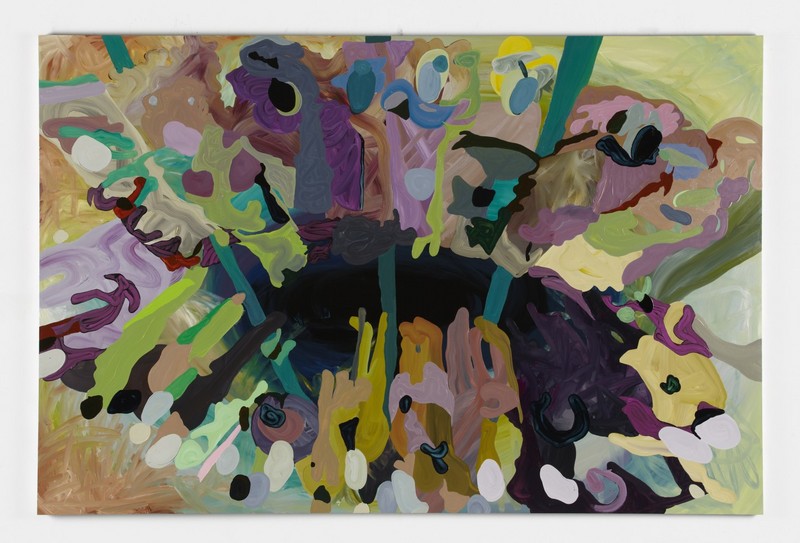 The Buchmann Galerie is pleased to announce the fourth solo exhibition of works by the English painter Clare Woods (GB, *1972).

In the new group of works, Woods, who became well known through her large landscapes (up to 2,5 x 10,5 meters), exhibits three different genres that mutually overlap: portrait, landscape, and still life.

The point of departure for these works is black-and-white photographic source material from books or newspapers, or the artist’s own photographs. Clare Woods is just as interested in the photographic reportage of Don McCullin as in photos of sculptures by Eduardo Paolozzi, such as Shattered Head of 1956, which can be found in the Tate Collection. The sculpture formed the basis for the painting The Repeater.

Like Georg Baselitz, for whom the inversion of the motif creates a distance from reality, with her colourless source material Clare Woods places a filter between reality — the landscape, the portrayed person, the still life — and the painting. Within this creative latitude, suddenly any colour and painterly expression is possible. All decisions are on account of the painting and are released from the constraints of a specific representation of reality. On an emotional level as well Woods also recodes the motifs through unusual coloration.

“I can project any colour onto the image as I have not experienced it first hand,” said Woods in an interview in October of 2014.

The reference to figurative works of sculpture is a conceptual method used by Woods to achieve a kind of doubled abstraction. The reality transformed in the sculpture is refracted a second time in the painting process. The works of Edouard Paolozzi and Henry Moore in particular, but also those of Louise Bourgeois and William Tucker have attracted Woods’ interest.

Clare Woods’ works have been shown in solo exhibitions at The Hepworth Wakefield, in the Southampton City Art Gallery, and Chisenhale Gallery in London, among others. Her works can be found in the Margulies Collection, Miami, in the National Collection of Wales, in the Arken Museum of Modern Art, Copenhagen, and in the Albright Knox Art Gallery, Buffalo, among others. An exhibition in the Oriel Davies Gallery in Newtown (Wales) can be visited until November 5, 2014
www.buchmanngalerie.com