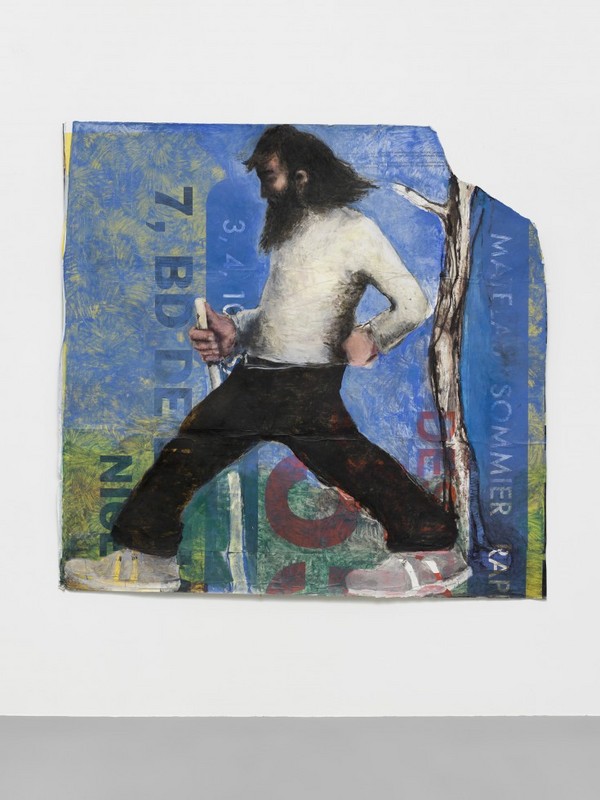 The Buchmann Gallery is pleased to announce a show of new paintings by the French artist Jean-Charles Blais (*1956 in Nantes).
Blais’ representational painting first came to the attention of a wider audience in the mid-1980s; he was a member of the inner circle of the French Figuration Libre movement, which achieved international renown at the same time as the Junge Wilde in Berlin, the Mülheimer Freiheit in Cologne, Transavanguardia in Italy, and artists like Martin Disler in Switzerland.
In the past years, Jean-Charles Blais’ main focus has remained on the portrayal of the human body, but the artist has increasingly narrowed his attention to the depiction of predominantly black, shadow-like shapes that dissolve the corporeality of the figure.
Following this pictorial language through to its logical consequence, this reduction down to the essence of figurative expression culminated in the creation of a group of black pictures where the all-black pictorial space is broken only by the occasional flash of white paint.
The new boldly coloured paintings, which are being shown for the first time, mark the emphatic start of a new phase in the artist’s oeuvre.
With the creation of a new figure, a type of urban hipster with sneakers and a hiking stick who dominates the composition, Jean-Charles Blais has succeeded in painting a series of pictures with a deeply engaging ambivalence.
Some of the paintings and gouaches with their column-like, strangely static looking individual figures and pairs radiate a sense of inner balance. Others employ a disturbing iconography, like the figure standing knee-deep in water who, with a powerful motion, is pulling two other people out of the water by their hair. Or could he be letting them go, as is indicated in a second painting? Is this person a saviour, a modern Saint Christopher – who is often portrayed as a giant with a walking stick standing in water?
As well as his exceptional iconographic inventiveness, one of the key features of Jean-Charles Blais’ work is the use of ripped advertising posters as a ‘canvas’ for his painting. The poster paper provides a special substrate for the oil paints Blais uses, and they allow him to change the format of the picture by cutting or ripping it, or layering and collaging it. Jean-Charles Blais used to work on the reverse side of the poster collages, but has now moved to the front. This provides a different base for the paint, and it allows him to incorporate details of the poster, such as letters and printed areas of colour, in the painting process.
Jean-Charles Blais’ body of work abounds with art historical references, touching on the work of artists such as Henri Matisse, Kasimir Malevitch and Philip Guston. He uses this as the basis to develop his own, distinctive artistic lexicon to portray the human body, which in his newest works in particular is emotionally deeply compelling.
Paintings by Jean-Charles Blais have recently been on show at the Cabinet d’art graphique, Centre Georges Pompidou Paris, at the Pinakothek der Moderne Munich, the Musée d’art moderne et d’art contemporain Nice, the CAPC Musée d’art contemporain Bordeaux, and the Musée Picasso in Antibes.
The artist’s works can be found in several major collections, including the collections of the Museum of Modern Art New York, the Museum Moderner Kunst Stiftung Ludwig Wien, the Carré d’Art Nîmes, the CAPC Bordeaux, the Stedelijk Museum Amsterdam, the Musée National Monaco and the Centre Pompidou Paris.
www.buchmanngalerie.com