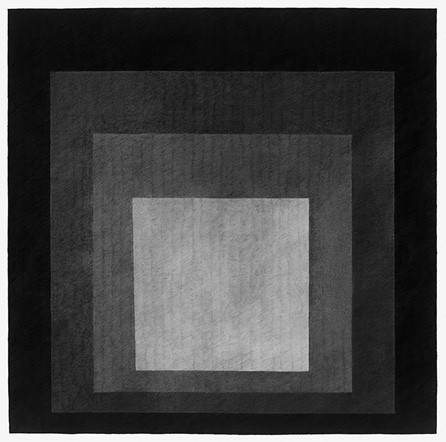 The Buchmann Galerie is pleased to present a first solo exhibition with Austrian artist Klaus Mosettig featuring his latest series of works on paper. For some years now, Mosettig has devoted himself to the medium of drawing and in that time created a number of large bodies of work, which were shown in 2009 in a solo exhibition at the Vienna Secession.
In the works exhibited here, the artist engages with the paintings of Josef Albers (*1888 in Bottrop - †1976 in New Haven).
Albers experimented with the effects of colours, shapes, lines and surfaces and the subjectivity of visual perception. In ‘Homage to the Square‘, one of his most important cycles, each picture consists of three or four differently coloured squares set inside one another.
With pencil and graphite drawings, Mosettig retraces Albers’ paintings as closely as possible in a methodical and time-consuming process. In eschewing Albers’ use of colour, he effects a radical reversal of value, stripping away all that defines Albers as Albers: the colour and its subjective perception, the body of the picture and the characteristic colour.
Not the colour or the flow of the painting or the illusion of the coloured space on the canvas is significant, but Mosettig’s subjectively positioned graduated grey shading.
Precisely in this apparently cool detachment from the original work lies a high degree of individuality.
Klaus Mosettig's new works combine painting, drawing and photography using photographs projected on paper as model.
For this exhibition Klaus Mosetting referred to Josef Albers's photographs from the collections of Kunsthalle Karlsruhe, MUMOK Vienna, Josef Albers Museum Bottrop and Josef und Anni Albers Foundation Bethany.
www.buchmanngalerie.com